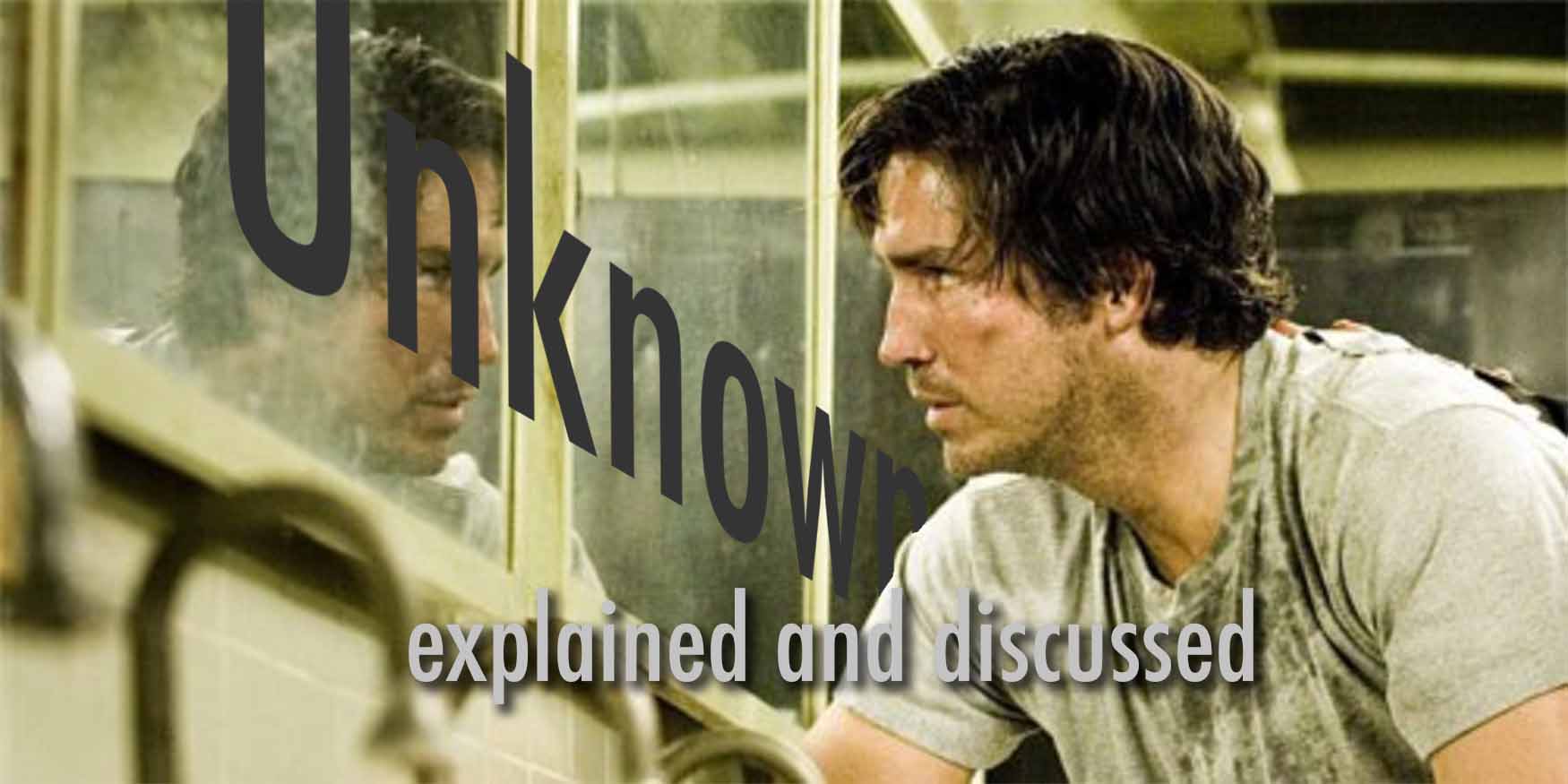 2006 Movie Unknown Will Keep You Guessing

Who knew that Jim Caviezel, Greg Kinnear, Bridget Moynahan, Joe Pantoliano, Jeremy Sisto, and Barry Pepper could all feature in a closed box mindjob twister and it would slip completely under my radar? How is that even a thing? But, thanks to DeKev, with another nice little recommendation in the movie recommendation widget, we are all the smarter.

The movie, Unknown, is sort of like an older school version of Free Fire, but better in the mindjob category. Why? Because it just keeps chucking twists at the viewer over and over again. And that is even after the general twistiness of the movie finishes and the real twists begin. (How the heck have I never heard of this movie before?)

If you haven’t seen it, the basic plot is simple…but after that, all bets are off. So, the movie starts by 5 men waking up in a warehouse, completely locked in, and unable to get out. The best part? All five of them have zero idea as to who they might be and how they got here. But the situations that they wake up in seems to indicate that they may not like each other much. It’s as if they passed out mid-fight (spoiler: they did.) but now, here they are, with no idea how to get out, and no idea what to do with these other men. Kill them? Work with them?

So the big problem for you guys though is going to be finding it. Right now, it looks like you can have Netflix ship you a DVD to your house. (I kid you not, I didn’t know that was still a thing.) And Amazon will sell you the DVD. Google Play store doesn’t have it either!?!? Maybe you’d have better luck going to those vats of movies in Walmart and just rummaging through the Ace Ventura copies until you happen upon it. I almost feel badly recommending a movie that is so difficult to find – but I have faith in your collective genius. Here, have a trailer, then head off on your treasure hunt… and when you return, do regale us in your feats of bravery and daring towards finding this film in the wild.

First problem, is that we need to figure out what to call the main characters of the movie. Because they don’t know who they are, and we don’t know who they are, it’s a little tricky to point out exactly who I am talking about from moment to moment. Out on IMDb, they name the characters thusly: Jim Caviezel – “Jean Jacket,” Greg Kinnear – “Broken Nose,” Joe Pantoliano – “Bound Man,” Barry Pepper – “Rancher Shirt,” Jeremy Sisto – “Handcuffed Man.” So, with that in mind, why don’t we just refer to them by their actor’s name. And then as things actually start clarifying, we’ll start adopting their real names. OK? Brilliant. You guys just are so accommodating. It’s touching. Really.

Like I said, the movie kicks off with these five guys, with no memories of who they are or why they are locked in this warehouse building. (I thought seriously about researching all the gas agents that are strong enough to cause amnesia in a warehouse sized space – and decided to just accept the McGuffin for once and go for the ride. If anyone has any guesses as to the gas, I’d love to hear about it. Seems awfully flimsy to me.) The first thirty or forty minutes we mainly watch as the five guys (lovely hamburger joint) wake and attempt to get out of the locked down warehouse. We also watch as Eliza Coles brings money to a drop location, for some unknown reason, and then the money disappearing.

But I’ll fill you into what is really happening here. Eliza Coles’ husband, and his colleague have been kidnapped. The kidnappers required a duffle bag full of money, which they got away with by stealing the money from the false bottom in the locker. The police track the bag for a while – but ultimately lose the perpetrators. OK? That’s the basic gist – which, is actually quite hard to piece together, even after the movie is over.

Who is Who in the Movie Unknown?

This, is the question of the entire movie. The cleverness to this premise is, that these five individuals absolutely know for sure that not everyone is friendly here. They even have guessed by the ropes, the guns and the locked doors, that most of the people in this warehouse might actually be horrible people. But who’s who? Well, the truth layers are given to us in three distinct onion peelings. Each one very different than the previous. And each one extremely important to the plot.

Layer One – Jim Caviezel the Thug

As everyone is beginning to remember more and more about who is who, Jim realizes he was one of the gang members. Worse, it was his idea to kidnap Coles for the ransom money. So, when the gang members get back, they order Caviezel (or Woz, as they call him) to kill Coles (Barry Pepper) and Greg Kinnear. Those two had been certain that they could trust Caviezel, but when push came to shove, Caviezel remembered who he was, and took the two guys out to the pit that had been dug for their cemetery plot.

Wait, what?!? Caviezel’s a cop? We just heard him shoot Coles and Kinnear. He bought into the memory whole hog! But when the head of the gang (played by Peter Stormare) that had kidnapped Coles came out to check on Caviezel, he says, “Hey, I think we have a cop among us.” Oh damn! The memory of him being the bad guy was false! He was an undercover cop. How is this possible? But, shhh, don’t worry too much, because we learn just two minutes later that Coles and Mr. Kinnear, are anything but dead. A fight breaks out, and Greg Kinnear is shot dead. Coles and Caviezel survive, and Caviezel puts his dead daughter, and divorced wife to rest by lighting the dead thugs on fire and tossing his lighter into the pit.

And when all is said and done, and the cops finally arrive, they come to pick up the pieces of the horribly upside down kidnapping recovery mission. They are glad to have their undercover cop back. And they are able to reunite Coles to his wife, Eliza. And upon seeing Eliza Coles, Caviezel – Jean Jacket – undercover cop, whatever you want to call him – has a billion memories flood back into his brain.

Basically, the gist of the memories were that Eliza had marked him, a cop, as the perfect person to swindle out of millions through a kidnapping ploy. A kidnapping, that would be all the better if it resulted in the death of Mr. Coles. His death would allow the new couple to live happily ever after with all their new found dough. But there’s more.

The Final Twist of Unknown

Throughout the movie we are presented with a conundrum, over and over again, a simple one. What if I am a bad guy? What do I do then? Do I remain with my assumed allegiances? Or do I break with those accreted piles of choices that got me to that point, and make the right decision?

Notice Joe Pantoliano – the bound man – and the choices that he had to make. As the lock in is ending, the five men, showing a rare cohesive impetus, are all set to attack the men coming through the door. Regardless of sides, they all band together to fight this unknown threat. But just as the door opens, Pantoliano remembers that he was in this crew. He’s one of the bad guys. So he thinks. And he thinks. And he doesn’t let the barrel go that is supposed to swing and crush the men walking in the door. He’s weighing his options. He’s trying to figure out what he ought to do. And ultimately he decides pivot the barrel, and swing it Greg Kinnear instead.

All five of these men (well, four really, because one dies early) have to grapple with their memories, and their choices as they remember them. And here, at the end of the movie, is Jim Caviezel – with the most choices to make. First he thinks he’s a bad guy, and almost kills Cole. Decides against this, sort of inherently knowing this can’t exactly be right? Or maybe he just chooses against murder. Then, when he learns he’s an undercover cop, he is vindicated in this choice. But then when he sees Eliza Coles, and he realizes this was all her scheme to kill her husband and take him for millions in insurance money, he really has a choice on his hands. And as the movie is ending, he turns the money over to the police. Then, as he is watching Eliza hug her husband, while staring squarely at him, he needs to decide whether or not to turn her in. And then the credits roll.

The final twist of Unknown is actually, literally, unknown. Does Caviezel’s character rat Eliza out, or does he let her skate? She single-handedly begin this chain of events, all with a mind towards getting the money, and being free from her husband. Everything else has snapped back into its correct place, save for this one detail, the most important detail, and the credits keep us from learning what his final choice will be. You can see the look on Eliza’s face – pleading with him not to tell.

After Caviezel hands over the cash, Coles wants to introduce Eliza to him. But, that is complicated, because Eliza and Mr. Caviezel have already met. And we see that meeting, at the bar, where she shows a ton of leg, as she is obviously seducing him into her plan.

So the question for you is, does he tell his police captain about her plot? Or not? Personally, I believe he threw her completely under the bus. And it’s not because he sees through her plan. And it’s not because it was an obvious ploy. But because this movie is all about being given a second chance, and doing the right thing with that chance. I don’t know, what do you think he did at the very end of the movie?