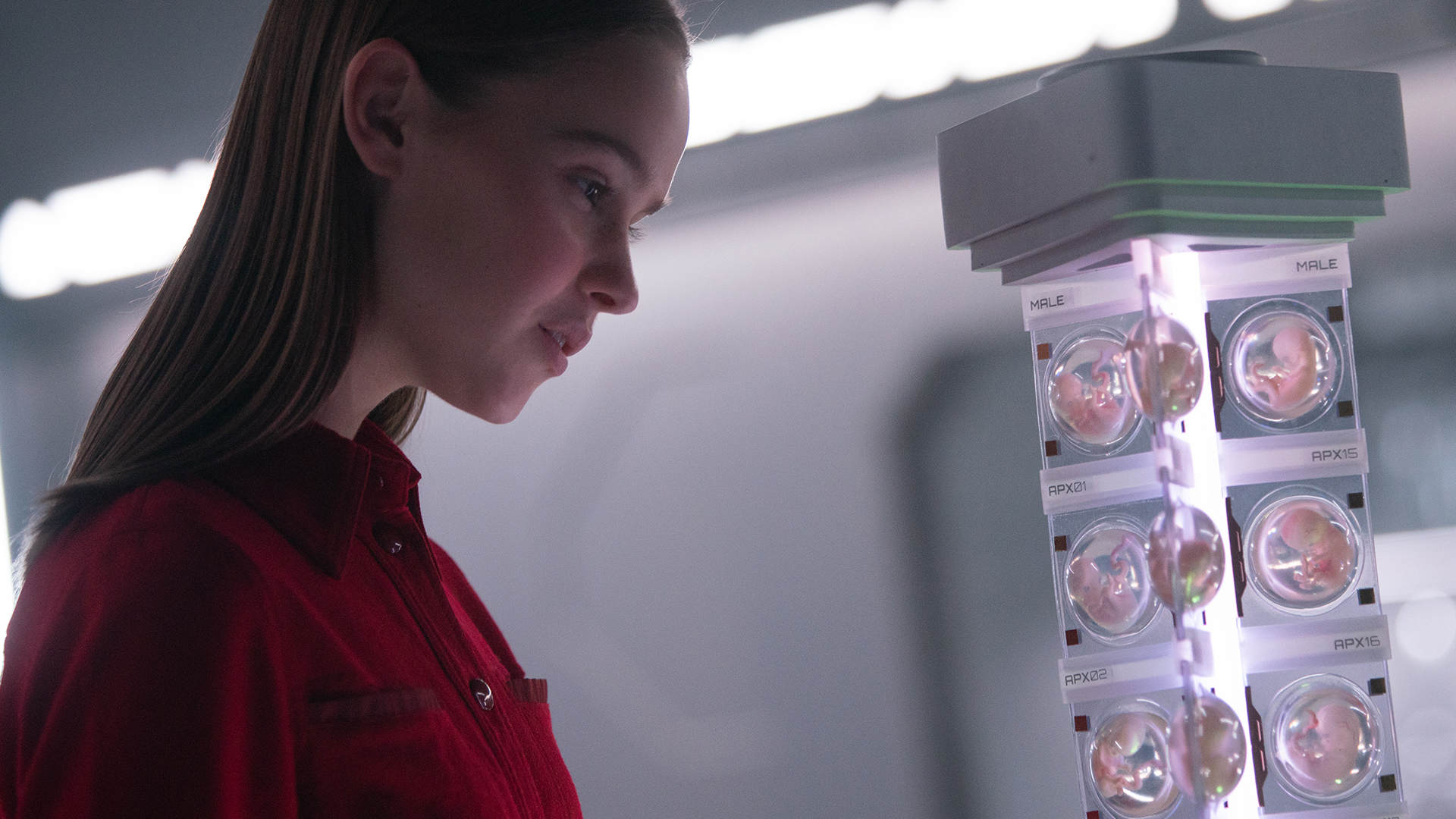 Are You Still Confused By I Am Mother?

Taylor Holmes
cinema
June 9, 2019
Are You Still Confused By I Am Mother? - well, it's understandable, seeing as though this movie is basically an art film disguised as an action film. IMDB
Screenplay
Philosophy 101
Action
Acting
Direction
Reader Rating9 Votes
4.1

I’m bringing you a movie today that I know for a fact – most of you aren’t grokking what this film is trying to tell you. How do I know? Because I was texted, emailed, telegraphed, and carrier pigeoned by so many of you saying this one simple message: “Dude? You seen I Am Mother yet?!? So good – too bad about that second half.” (OK, the messages you guys sent me weren’t so spoiler free. Yeah, thanks for that.)  So maybe we should dive deep on the details of this movie with the hope of helping all of us to grok the heck out of this thing, and then? To discuss it after the fact. So, are you still confused by I Am Mother? I’ve got the answers for you. And if you enjoyed this movie, maybe you’d also enjoy Bird Box, Moon, or maybe the similarly named, Mother!.

But first, for those of you who haven’t seen it yet…what is it? You can watch it on these online streaming sites:

I Am Mother is a new Netflix movie that tells the story of a robot (Mother, voiced by Rose Byrne) that has been set up to protect the human race after a global pandemic. With thousands of human embryos in stasis, awaiting the moment to initiate them, and eventually repopulate the earth. OK? And this story is about the relationship between Mother and Daughter (played by Clara Rugaard) and Woman, who appears suddenly and throws everything into disarray…

OK? Clever premise. Tricky twists. (Which has an extraordinarily similar feel to it as the basic plot line of Wool. Have you read that book yet? Is someone going to create Wool as a movie?!? Oh, the Google just told me that Spielberg is producing a film based on the book…but that it’s currently stuck in screenplay rewrites. Gotta admit, Spielberg definitely doesn’t fill me with hope…hrm. A subterranean dystopian struggle against an authoritarian dictatorial oppression? Spielberg? Yeah. Not feeling it. But I digress.)  And a conversation about moral free agency that I promise you, most people weren’t even bothered to think about, let alone understand. But I promise you, there is gold in these hills if only we mine for it.

Quick I Am Mother Philosophical Primer

Quick tip. Whenever a movie starts out referencing philosophers, you have already been handed the crib sheet to the movie and its underlying beliefs, or ideals. And after Mother raises Daughter to an age that she has begun to study philosophy, the two philosophers Mother references are Kant and Comte.

Kant is a philosopher that most of us know, just from magnets on refrigerators and bumper stickers. But basically, Kant was a philosopher that didn’t believe in a blank slate. That we don’t come into the world totally empty vessels, ready to learn and add knowledge as we go. But rather, that we are experiences, and that reason itself is structured itself, and these structures inform us and teach us. That our minds are not independent of the world that we live in. And more importantly to this movie are Kant’s thoughts on ethics. Kant was a duty based deontologist, i.e., he believed that the sole feature of an action isn’t what gave it its morals. But rather it’s the MOTIVE behind the action that gave it its moral foundation. I steal your car. Evil? Maybe. If I just wanted it. But what if you are drunk, and I steal your car solely in my attempt to try and keep you alive? Then it wouldn’t be. Make sense? So, Kant is our great-granddad of ethics and morality.

But who is this Comte guy? Well, he happened to be the philosopher that crafted the idea of positive philosophy – WHICH, was just a response to the French Revolution. You remember the French Revolution because it was that time in European history when the peasants rose up and basically chopped off everyone’s head that seemed noble or important. And then the French Revolution had a COUNTER revolution that attacked everyone doing the attacking. It was crazy. Well, Comte crafted his ideas based on the sciences, and ultimately had an enormous impact on guys like John Stuart Mill and Karl Marx. He believed in social evolutionism that sort of set up the idea of practical and objective social research.

Comte believed that the most evolved stage of human evolution was the positivist age…or when humans bail on absolute truth, and begin discovering via reason and observation. And that it is through this scientific study that humanity can explain the laws and guidelines necessary for humanity to exist at an optimal level. That there was a hierarchy of the sciences, and that math was the highest of them all. And that it was physiology that would solve the various crises that most civilized nations are bogged down in. WHICH, would ultimately help nations move towards peace.

Doesn’t make sense, maybe you should have just skipped past that last section. I don’t know what I was smoking when I decided to try and explain these dead philosophers to you. I know. I’m sorry. I won’t do it to you again (and this my friends, is possibly the most blatant lie I’ve ever attempted.). Basically Kant set up Truth and Ethics as the foundational way-point by which all of society, and individuals should be governed. While Comte, instead, ditched God and decided to think more about society overall, as opposed to an individual. And with that, our discussion of this movie is over. Because, I’m sure it all makes sense, 100% now. No?

NO!? Dang it. I guess we’ll keep typing more words then.

Think back now to when Mother is training Daughter on philosophical lifeboat-esque simulations. Really, what the question is all about is whether it’s all about the individual or if it should be about the entire group. The social collective. Should you subjugate your individual rights for those of the collective? Well, Mother is up to something, and it might just be about this whole, weird, collective idea thing that she is up to.

And when Woman arrives (as I mentioned, who is played by Hillary Swank), she throws everything out of balance for Daughter. It begins two different narratives. The first narrative is Mother’s, and that was that all of humanity was destroyed by a global contagion. To go outside is to invite death. But Woman’s arrival tells a story about human survivors living in mines deep within the earth. And Daughter, she doesn’t know which one to believe. But eventually, Daughter earns the trust of Woman by saving her life. And after Mother allows her to choose her brother, she discovers that there were three APX models that were born. APX-01, APX-02, and APX-03 – which is herself. APX-02 was “aborted” for some unknown reason. But we can infer it was because she was a moral, ethical, or general failure. As we learned later. But who is APX-01? Hrmmm.

Not to spoil it, but maybe APX-01 is Woman, which makes Woman and Daughter, sisters. No?

Simultaneously, Mother becomes truly concerned about the sway Woman is having on Daughter, and the way in which her ideology is winning her Daughter over. And so she locks the two of them up. But after Woman and Mother fight, Daughter and Woman run for the “mines.” And when Daughter realizes there are no mines, that it’s just Woman, living on the beach. Wait, WHAT? Where are all the humans?

Daughter – “What I did was listen to you.”

Realizing that her sister was lying about the humans in order to get her out of the Mother Compound, Daughter decides to run back for one last final confrontation. And when she gets there, she is greeted by hundreds of droids, with guns trained on her. Hrmm, what is this? And when Daughter pleads with them to let her speak to Mother, they allow her through. And when Mother and Daughter finally talk, Daughter has taken hold of her Brother, and she asks her Mother why. And Mother’s response?

“This was your idea?”

“I had to intervene, I had to elevate my creators.”

And as the final battle commences between Daughter and Mother, Mother looks hard into her Daughter’s eyes. But what is she considering? Daughter is making the case that Mother has in fact created a more ethical, and more perfect human in herself. And that if anyone could be trusted with the future of the human race, it’s her. To that end, Mother convinces Daughter to blow out her CPU. Why? To allow Daughter space to raise Brother in the home, free of droid intervention.

Which leaves us with two final scenes. The first being a droid’s visit to Woman on the beach. “Do you remember your Mother? Curious isn’t it? Like someone’s had a purpose for your life, until now.” At which point the droid closes the door in order to kill Woman. The collective droid hive mind AI has made its choice for the future of the human race. And the future is with Daughter, the Comte philosophical perspective. The choice that will keep a more socialistic hierarchy in mind, and not an individualistic ethic front and center. But then we get the final scene of Daughter, holding Brother, and staring intently into the camera.

What’s the Ending of I Am Mother Mean?

The question we are left with is simple enough…when Mother chose to let her primary robotic form die, did she believe that Daughter would do the “right” thing? That she would live her life raising children as Mother did. Teaching them as she was taught. And ultimately raising a collective society based on the philosophies that will secure a socialistic response to their near complete extinction.

And does that look like the face of someone that is about to do what she’s told? Nah. This is an individual that is determined to upend her robot overlords somehow. And that Mother bet poorly. Because now, Daughter is Mother.