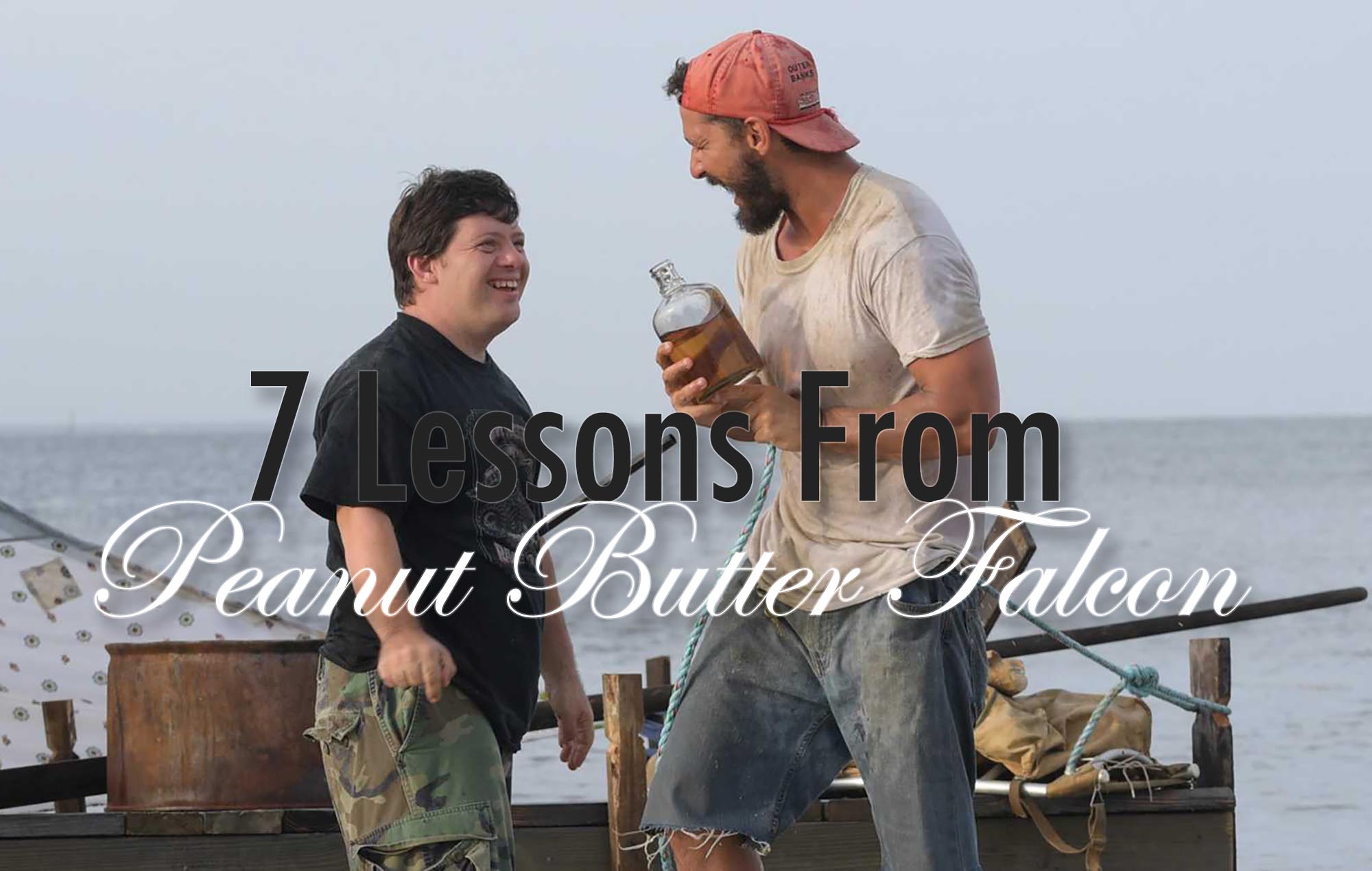 Normally here at THiNC. my posts are serious paint by numbers. I ALL CAP MY LOVE FOR <NAME> MOVIE!!! and then I post a trailer about <NAME> movie. I encourage you to find <NAME> movie over at <STREAMING SITE> and then I meticulously walk you through the film from top to bottom. Discuss it as we go. After which, I unpack the film with various theories that might make sense of its plot twists and mindjobness. But today, I just have some random thoughts on Peanut Butter Falcon. I watched it with the family last night and there were just a ton of interesting life lessons that just blasted into my head while watching. So yeah, see Peanut Butter Falcon! And here we go – Top 7 Life Lessons Per Peanut Butter Falcon.

I absolutely adored Peanut Butter Falcon. It’s a worthwhile watch. Shia was brilliant. He has perfectly shed the horrific Indiana Jones stuff of nightmares, and now we have a completely re-socialized and revitalized bona fide brilliant actor on our hands here. I’m hopeful that it isn’t just the brilliance of the role, and that he too has come full circle. But we’ll have to see? I think I did really enjoy Borg vs. McEnroe – but I don’t know if I was sold like I was here. Oh, and Dakota Johnson too…she and Shia had a pretty compelling magnetismic thing going that needed to work quickly as they didn’t have a ton of time on the screen together. I thought she was good in Bad Times at the El Royale as well. But truth be told, I would have thought 50 Shades would have single-handedly nuked her career.

But that is all irrelevant to the larger point I want to make here. So, the movie is about a fairly fantastic guy named Zak (Zachary Gottsagen) who happens to have Down Syndrome, and it’s about his escaping from an old folks home. After Zak jams, he encounters a fellow named Tyler (Shia LaBeouf) who happens to be a dirt poor crabber, and boatman. And the two mismatched misfits just cut and run from their respective lives. Eventually the duo are joined by Eleanor after she finally tracks the duo down. So from one, we quickly go to two, and finally a threesome.

Look at how this life of theirs runs. They are tromping through cornfields. And splashing across waterways. And scavenging for food. Now, the movie is giving them the brightest, and most positive way life could be breaking for them. Instead of everything going wrong, everything is going right. But even in the midst of that glorious optimism, this trio is saying something important about the larger values of life. It was interesting to see how Eleanor just innately cares passionately about Zak. And Tyler too! I mean, he sounds like he doesn’t at first, but he obviously does. Which brings me to the first life lesson that I learned from from Peanut Butter Falcon:

#7 – Walk your own path – do your own thing: if these three characters are characteristic of anything, it is that they do their own thing. They are societal outcasts. Well, Tyler and Zak specifically. And Eleanor is a widow who spends her life caring for those that are sick and dying. These three individuals are the epitome of counter-cultural. They do their own thing and don’t apologize to anyone about it.

#6 – Be flexible when life throws you a curve ball: two years Zak has been trapped in an old folks home. He shouldn’t be there. And yet, Zak overcomes by figuring out a way to escape, through bars, into the night, in nothing by his tighty whities. Zak did what he had to do to figure this life thing out. He’s an inspiration.

#5 – Learn from life’s experiences: I loved Shia’s character – and just how all in he was, and in all the wrong directions! He is working at a crab shack and is stealing crab from a competitor’s pots. When confronted, he sets all of their pots on fire. He went from being down a few hundred bucks, to being down thousands and thousands of dollars. Which, for him, is insurmountable. But towards the end of the movie, when Eleanor asks what he’s going to do, he says, pay back that debt, and get on with his life. I was pretty impressed by that.

#4 – Never stop trying: I would have given up day one. Are you kidding? Tyler is being chased by guys about to shoot his hand off. Zak has nothing, nothing but a desire to be anywhere but back at that old folks home. Eleanor is down her car keys, and is trapped, but she’s determined to see this through, come what may. This trio is determined.

#3 – Make every moment count: This movie was filled with numerous glorious moments. Just small moments of bright light. Like Zak catching a huge fish with his bare hands. Tyler and Zak making their secret handshake. Zak learning how to shoot. Eleanor swinging from the crane into the river. And how much did these little magical moments cost? Zero. They are just making magic where they find it.

#2 – Care passionately about the people around you: But the biggest thing that jumped out at me was just how much all three of these people care for each other. I could learn a lot from the care that the three of these people have for these random individuals. Tyler, randomly encountering a down on his luck Zack, gives Zack like 80% of everything he had. He didn’t have to do that.

#1 – Don’t let people define you: This is my favorite one by far. Tyler refuses to coddle Zak. He treats him with respect, but he also expects so much more from Zak than anyone has ever done before in his life. And Tyler tells Zak he isn’t retarded, and that he shouldn’t ever allow other ignorant people to define him. It’s such an important lesson.

Yes, this movie is all sap. And yet, it is so contrarily sappy as to not be sappy. I don’t know. To be honest, I actually could have thrown another five ideas that I saw emanating from this movie. Like the fact that your thoughts are powerful, so be positive in what and how you think. Or your attitude is so important in every circumstance. I’m not one for motivational or inspirational clichés. But there were so many extremely positive things flowing out of this movie that I had to stop and write a few of them down.

What about you? What did you think of the movie? All tripe? Am I missing something here?