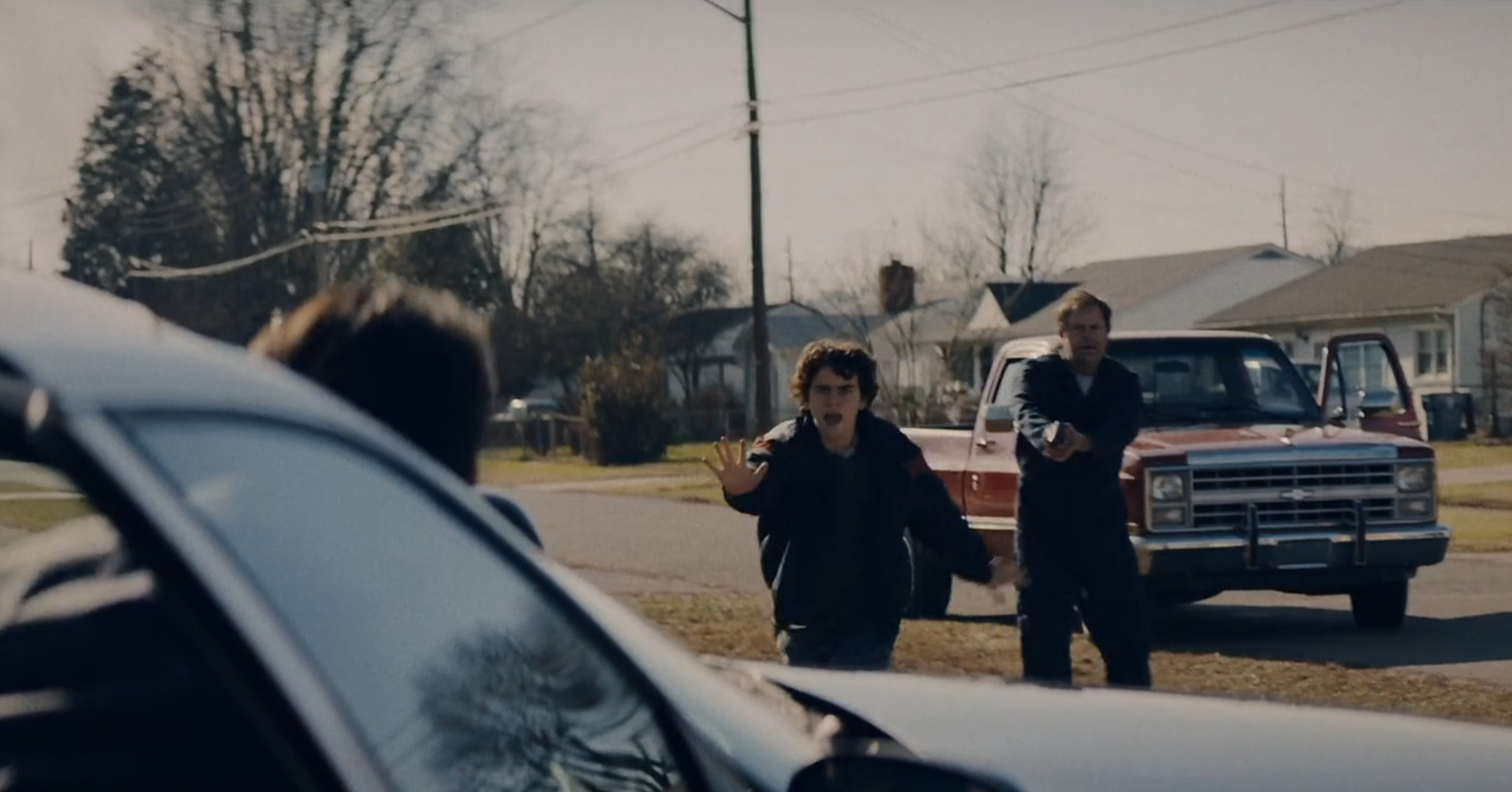 Is the Movie Don’t Tell a Soul Redeemable?

Is the Movie Don’t Tell a Soul Redeemable? It isn’t a surprise that I love quirk. The more quirk, the more I’m going to sign up for it. Tons-o-quirk per square foot? I may just feature it here on THiNC. as the movie of the year. Well, today? I’ve got a quirky one for you all. So quirky, it might anger you a little. Heck, it might really anger a few of you. But that’s OK, because I think it may just redeem itself at the very last. Or you might lynch me. Either way?! It’ll be a fun ride.

So – as always – here at THiNC. I don’t review movies (yes, I see the rating box up there. You are observant, aren’t you?) but rather I talk about them so that we can discuss them in the comment section (or, better yet, over at the Patreon Discord chat server – which has been a ton of fun lately.) That being said, the rest of this movie walkthrough is going to be highly spoiler-ific. Want to ruin it for yourself? Sheesh. Go ahead. But I’d prefer you head over here, watch it, and THEN read about the ins and outs that make this movie so good. Because I’m pretty sure you didn’t pick up on all of the various nuances with this one.

So, the quick and dirty of the film is that it’s about two kids that steal from an elderly woman. While getting away, they are spotted by security guard who chases after them. The security guard falls into a deep hole in the woods. And after that, the twist and turns are more crazy than an Amazonian rapid. You’d think there wouldn’t be much room there to pivot, twist, and turn… but you’d be wrong. I mean, one of the main characters (Rainn Wilso?!?!?! YAAAZZZZ) is stuck in a hole for 90% of the film’s running time. What could you possibly do with that? Well, let’s just see…

Don’t Tell a Soul Run Through

The movie opens with Matt (Fionn Whitehead – whom you know from Dunkirk and more importantly, Bandersnatch!) having a big-brain idea that he and his brother ought to rob a house that is being fumigated to kill the insects. (I asked my kids if they’ve ever seen a house being fumigated and they were like, a bug bomb tent?! WHA? This is definitely a regional thing. Growing up in Los Angeles, I saw these all the time. Never once considered going inside one though – and I was up to all kinds of crazy stuff as a child. Yeah, that’s an understatement.) Thankfully, Matt bought a gas mask from a surplus store (??!?) and volunteers his brother Joey (Jack Dylan Grazer – IT) into doing the heist.

When Joey makes it out with the cash, they haul it out of there. But not before they are spotted by Hamby, a security guard (played by Rainn Wilson from … um… you know already. Right? You know? Please tell me you know this already. Bueller? BUELLER?). Soon though, Hamby falls into a deep hole and the kids are free to get away with their loot. But of course, Joey can’t stop thinking about that poor guy trapped at the bottom of that hole.

Eventually Joey heads back, and learns that Hamby is still alive, if with a broken ankle. Heck, Joey even establishes a bit of a rapport with the guy. They share stories, talk about their families, all at a safe remove of 20 feet. You see, Joey has himself a bit of a moral dilemma on his hands. If he doesn’t help the guy out of the hole, he’ll have Hamby’s death on his hands. But if he lets him out? He’ll get busted for robbing the little old lady having her house bug bombed. Hrmmmm? What to do, what to do? (Well, the right answer is, let the guy out… I mean, not to give you the crib sheet or anything. But common.) As the dance continues, Matt gets involved, even pisses on poor hole-ridden-Hamby at one point.

Look, it may seem like this movie is actually about Hamby. Whether he will be saved, and if Joey will come to his rescue and do the right thing. But that isn’t what this particular movie is all about. Instead, this movie is about Joey and his horrible older brother Matt. You see, the two kids have had a horrible life. They have had an abusive and alcoholic father, until their mother shot him dead for abusing the boys and herself. Their mother now has cancer from her husband’s second hand smoke. And she’s way too sick to actually parent these two boys. This much is obvious from the wrap sheet of terrible things these two are up to. But we know that Joey wants to be a good kid. And Matt? He wants to be horrible to anyone and everyone that comes near…but most especially his brother. The apple didn’t fall too far from the tree on this one. But my point in stopping for a moment is because the movie seems to be doing a fair bit of misdirection as to what it’s all about. This is a story about Joey, about Matt, and their very sick mother…and about doing the right thing. But that right thing is inside their family, not with regard to Hamby. Okay? (I mean, sure, someone ought to let Hamby out. Fine. That can be a part of this movie too, if you insist.)

Eventually though, Joey learns from the news that Hamby actually murdered his family, and is on the run. Wait, what? The good Mr. Hamby is a murderer? Alright, that changes things significantly at this point. Upon learning he’d caught a horribly depraved individual all he needed to do was to call the cops, check in on any reward money, and then lead them to the hole. Instead though, Joey is so traumatized by his brother, and so horribly broken by his father that this isn’t what Joey chooses to do. Instead, Joey let’s Hamby go, on the promise that he’ll scare Matt really good before he heads back on the run.

Simultaneously though, Matt has decided he’s going to turn his brother in for grand larceny (or whatever, look, I’m not a prosecutor, chill.) He is riding with the cops as they head to the house, which is where Joey and Hamby are. This leads to Hamby shooting and injuring both officers, and grabbing Matt. Hamby, Joey, and Matt then head back out to the hole, and they make Matt jump in. Joey then screams into the hole, at Hamby’s suggestion, that he rules the roost… that he is the big man now. Did I mention that Joey is so enamored with Hamby that he asks if he can go with him on the run? This is a desperately lost soul. When Hamby decides it’s time for him to go, he pushes Joey into the hole… upon which Matt, OBVIOUSLY, beats him unconscious.

Outside the hole is where the real fun is happening though. Because Joey and Matt’s mom is here with her hunting rifle, and ready to drop the hammer. (We should probably mention at this point that “Mom,” or Carol, is played by Mena Suvari – who I adored in American Beauty. A movie that for years and years was my “Favorite Movie Of All Time” until #KevinSpaceyisa*&*$&#(@[email protected]! hit the fan. Many of you teen-crushed on Bo Derek or Catherine Bach (Daisy Duke) but for me it was totally Mena Suvari.)

Record Scratch… SORRY. Where was I? OK. Right. So here we have Matt and Joey in a hole, and Joey unconscious from the beating he just received from his own brother. And, up top, we have Hamby, attempting to surrender to the really upset, but extraordinarily sick, Carol. Can I pause a moment to say, the odds of Mom hitting Hamby, twice in two shots, while holding that extraordinarily high caliber rife from the hip, she should have just purchased two lottery tickets instead of pulling the trigger. Because there is literally no way she makes those shots! hahaha. Anyway. But she does. She knocks Hamby down with the first one. And kills him with the second.

But remember…this movie isn’t about Hamby. Hamby is just catalyst. He’s just a fuse that sets the gunpowder in this family off. The mother – can’t possibly parent as she is so sick. Who knows though – maybe when she was well she was constantly asking for her sons to grab her a ginger ale? We just don’t know. We do know that Matt is an outright, and evil, jerk. And Joey isn’t too far behind his big brother. WHAT YOU CAN’T SAY THESE THINGS ABOUT JOEY!??! Uh, yeah I can. He is just so far gone. Lost and adrift by the situation he’s been abandoned to.

The moment though that his mother steps up, and blows away Hamby something changes. Or, there is this realization that, quite possibly, something could change. If that makes sense. The fact that there is an inflection point doesn’t mean that anything will change. But there is the great possibility for change. I do think that Matt has realized that he might have gone way too far this time. His antics of forcing Joey to steal the money, and then turning him in for it? Then beating him senseless? It’s all way too far. And maybe, just maybe, Joey will realize the corner he was turning down? Maybe?

The Ending of Don’t Tell a Soul Reconsidered

I’m sure many of you thought the ending was way too negative. And I get that. There is literally no one in this movie to root for in the end. The mother? Yeah, no thanks. Matt? Definitely not. Hamby?!? The family killer? Joey was our guy, that is, until he packed up and tried to move in with Hamby. Is there another way to end this film and still keep the sympathy vote for Joey? Maybe you could have had Joey realize the pain he was inflicting on in his brother? Maybe something like this:

Ext. Scene – Hamby and Joey looking down on Matt in the hole:

Hamby: “Shoot. Himmmm.” as he hands Joey the loaded and cocked gun.

Joey considers Matt in the hole. Considers his new father figure standing next to him. He’s considering it way too long for Matt’s liking and his screams escalate. Joey flashes back to a moment when his father told Joey to do something mean to Matt, or vice versa. And something clicks in his head – and he turns the gun on Hamby and shoots him down.

Seems like a pretty rough ending for a kid to pull off though. Probably why Alex McAulay brought the mother in from out of nowhere to do the honors. But I’d argue that Joey still deserves our sympathy. He obviously attached to the very first male figure that walked through the movie. His abusive father was gone. His older brother had made a right mess of things. What else was he going to do? Obviously he’s going to reach out to Hamby. And obviously Hamby, the family murderer, was going to betray him.

The ending is complicated. It’s messy. And it’s definitely not tidy. Which is why I really enjoyed it. I found myself going – wait, WHAT? hahaha. This is awesome! They can’t do this! DO MORE STUFF YOU CAN’T DO!!! I LOVE IT. But I also know the ending is going to be controversial, confusing, and ugly for most. But to you I’d say, you’ll be okay. Take a deep breath. It’s going to be alright.