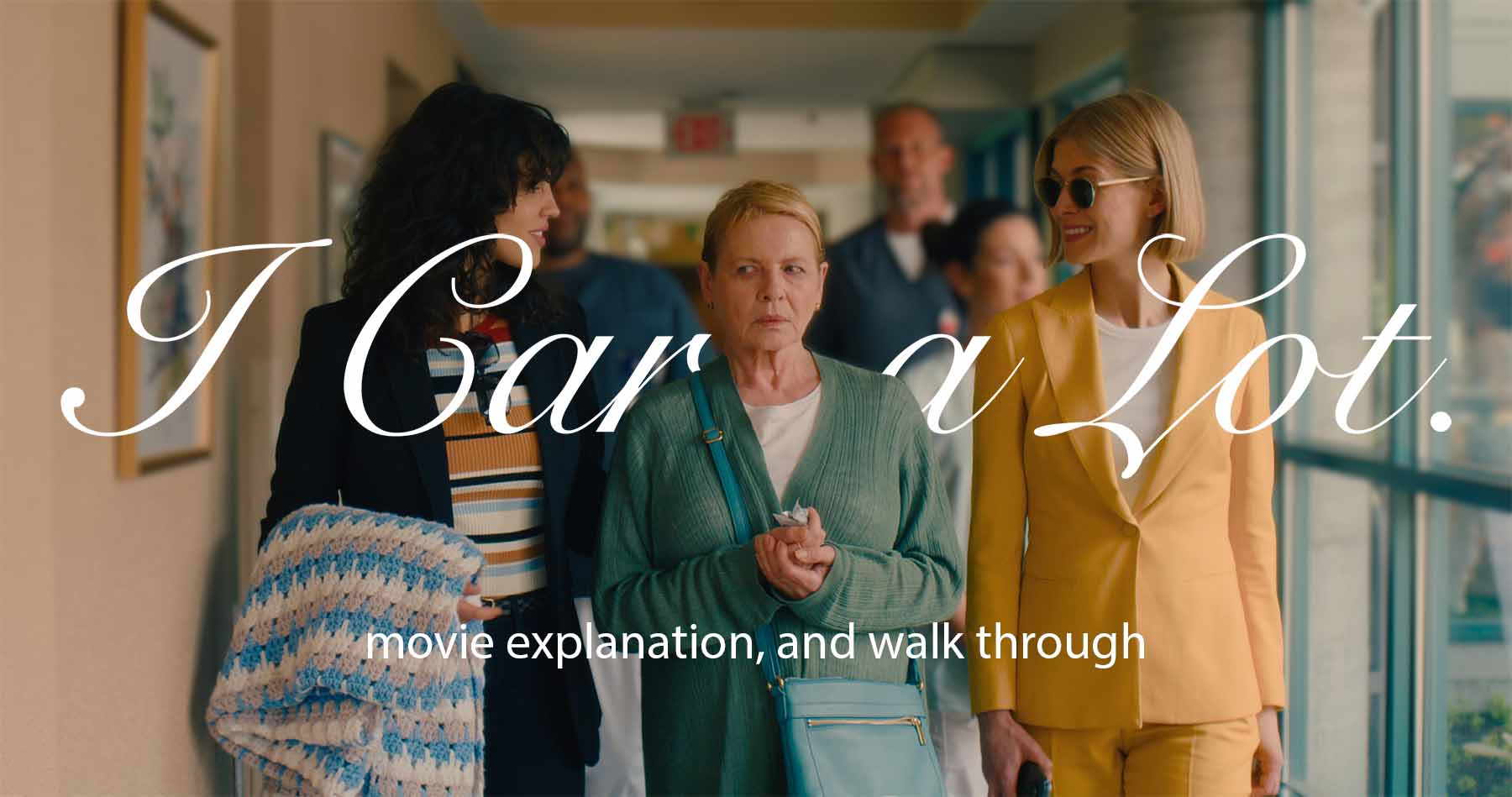 Why I Care A Lot Is Worth Your Time

Why I Care A Lot Is Worth Your Time. I really enjoy amoral films where the “heroes” – shall we say antiheroes? – check their morals at the door and just blow it all up. You know, characters like Patrick Bateman in American Psycho. Dr. Hannibal Lecter in Silence of the Lambs. Or what about Tony Montana in the movie Scarface? Or better yet, Vincent and Jules from Pulp Fiction! But my favorite antihero might just possibly be Tyler Durden from Fight Club. As we follow these characters through the film we find ourselves rooting for these horribly wicked individuals. Mr. Wick, yes, I understand your dog is dead… but the kill count is beyond 300 now… maybe we should dial it back a bit? Well, today, I have another interesting antihero for you: Marla Grayson.

If you haven’t seen the new Netflix sensation, you definitely need to check it out right here. It tells the story of a grifter who takes advantage of elderly people with minor health issues. She manipulates the courts into becoming their guardians, and after? She takes them for all they are worth. Trouble is, she accidentally grifts the wrong elderly person. From there it becomes an intense, highstakes, game of cat and mouse. But there is more here than meets the eye. Anyway, make sure you watch the film first, and then, join me in discussing the ins and outs of this fun little film further down this post. It really is a fun watch… and it’s taking the interwebs by storm. Everyone is talking about it. Let’s figure out why…

I Care A Lot. Walkthrough

As I said, Marla Grayson (played by Rosamund Pike, who you probably know from Gone Girl) is a con woman/grifter that manipulates the courts to give her guardianship of vulnerable elderly people. And in the movie’s opener, we watch the setup of how she works, as she is in court defending her decisions with a Mr. Feldstrom (played by Macon Blair who was BRILLIANT in Blue Ruin (Heck, Blue Ruin is one of the best movies I’ve talked about here on THiNC. definitely check him out in it.)) who is trying to get custody back of his mother. But when he is summarily defeated by the courts, he is shuffled off into oblivion.

Grayson soon learns of another ripe cherry for the picking by a local doctor, Dr. Karen Amos (played by Alicia Witt) who helps Grayson convince the judge that Mrs. Peterson is unable to care for herself, and that the court should bring her in as her guardian. This obviously doesn’t go well with Mrs. Peterson, seeing as though she is smart, well-read, and highly capable of caring for herself. But everything goes well with her admittance into the care facility, and soon Marla is flipping her house, and emptying out her safety deposit boxes. While there, Marla finds diamonds that Jennifer Peterson hasn’t insured. Which probably means they were stolen, and that she wants to keep them off the books. Relocating them for a bit, Grayson thinks that this is her luckiest day ever.

Cut to the Russian mafia, and Roman Lunyov (played by Peter Dinklage) … who just happens to be Mrs. Peterson’s son. Yeah. Grayson may have just screwed up, like a lot. After discovering what Grayson is up to, they dispatch a lawyer to fight for his mother’s release. After attempting to bribe Grayson with $300,000 dollars, she demands millions instead. When he attempts to legally secure Peterson’s release, he fails, as he can’t prove his connection to her as Lunyov who obviously needs to remain anonymous. As the lawyer (played by Chris Messina who was great in She Dies Tomorrow) walks away, he promises that Grayson will regret this decision one day.

Tired of Grayson’s dominance, Roman dispatches three men into his mother’s care facility to get her out. And the attack on the facility almost works. Soon after, Roman murders the doctor that worked to get her mother put away. And seeing the death of Dr. Amos on the news, Marla makes plans with her girlfriend to run for it. But instead stays in town because she refuses to lose to a man. She thinks that men are usually just threats and bluster. She’s not going to cower to some man. But soon after Fran, her girlfriend, is beaten senseless and left for dead after the gas was left running in the house. And Marla is drugged, and put in a car that crashes into a lake. Barely surviving, Marla makes her plan for revenge.

Having dispatched Mrs. Peterson to a psychiatric ward as retribution for Roman’s escalation, she now starts her plan to get back at Roman. She is able to get to Roman because she memorized the license plate number on the car that kidnapped her. After tracking down the driver, she and Fran follow him back to Roman. They attack Roman, drug him, and leave him naked on a trail where a jogger finds him. After being unable to ascertain his identity, the judge appoints Grayson as Roman’s guardian, which means that Grayson has won the day. Roman thought he could get Grayson to slink away, and that he’d win the day… but he was wrong. Sitting there in the hospital, he knows that he’s lost. And he capitulates to her $10 million dollar terms.

At the last second though, he tells her that maybe they should go into business together. Building up a business with his money and her business acumen, they could create thousands of shell companies taking her con to the next level. And, in an entirely legal way (or mostly legal anyway). Grayson’s eyes go wide with the potential of what Roman is proposing. She knows that she is capable of making it work. And the duo pull it off. Grayson’s new nationwide corporation begins a massive chain of guardianships, pharmaceutical companies, care facilities, and on and on it goes. Apparently, millions of elderly come under the control of Grayson’s new enterprises, and she becomes stupid rich. And as the movie happily comes to a close, we watch as Fran and Grayson go to leave an interview in a Ferrari, when Mr. Feldstrom arrives in the parking lot. He says that his mother died in one of her care facilities, and he never got to see her. He then pulls out a gun and shoots Grayson in the chest. Fran screams for help as Grayson dies from her wounds.

I Care A Lot. Has A Lot Going On

Probably one of the only things I didn’t like about the movie was how it sort of bordered on the cartoonish at times. Yes, it’s a stylish sort of conman sort of a movie. But there were times when the movie devolved into almost slapstick silliness. Yes, it was an amoral downward spiral with a super clever heist setup… but the way in which two women were able to overcome numerous security guards in order to get to Roman? And that no one came for retribution? Seemed like it was a little too cute of an ending. But where all that cuteness turned off was with Feldstrom’s murdering of Grayson in the parking lot.

But why is that? What happened here? Well, I’ve talked about this Hollywood propensity for years here on THiNC. It’s this drive to a deeper desire for justice – fairness – and a deeper morality. Yes, we enjoyed winning while abusing old people for a little while. But ultimately we as humans can’t let that stand. We demand justice for the sins of our movie characters when they do something that isn’t 100% likable, or fair. Have an affair, forget about it, justice will find out. Murder someone, you won’t make it to the end of the film. Kill a dog… woah. You will pay for that with the swift retribution of John Wick. And the same thing is happening here as well. And Hollywood offered Grayson on the altar of justice as a result of her untenable sins. We were allowed to exult with her as she succeeded. We reveled in her success. We celebrated her utter thrashing of Roman, a mafia bad guy. She overcame. But she did it at the hands of countless thousands and thousands of grandmothers and grandfathers as they bilked them out of their life savings. I’m sorry, but that is no hero that should be allowed to survive the day, and live happily ever after.

“I want to be rich. I want to be able to use my wealth like a bludgeon, like real rich people do.”

I’m sorry, but that is no Hollywood hero (or antihero) that will be allowed to survive the day.

If you loved “I Care a Lot.” there are a few other movies I might be able to recommend for you. Namely, Blue Ruin (which I already mentioned – weren’t you paying attention?), Thoroughbreds, Kajillionaire, Green Room, and Shimmer Lake. You are welcome.