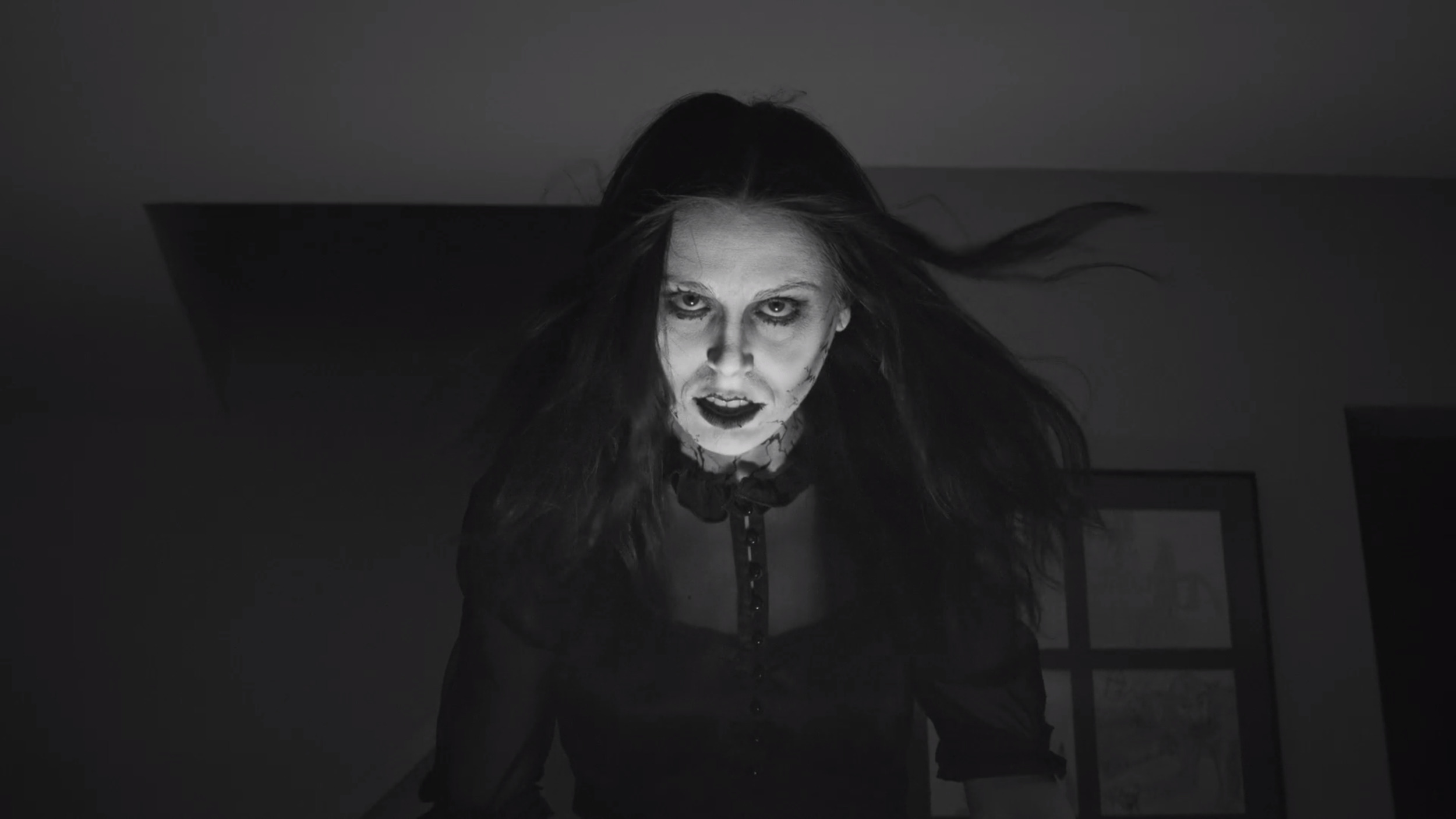 I wish we could Robin Hood a billion dollars in marketing resources from the likes of Die Hard 48, Marvel’s ‘The Hulk – Going Ballistic in the Bahamas,’ and James Bond 98 – ‘You Stirred My Drink?,’ just so we could give those ad resources to movies way more deserving of viewer’s attention. For example, imagine what movies that actually have a screenplay could actually do with that kind of marketing?? But, instead… here we are, trying to drum up views with word-of-mouth campaigns, like this one. But here we are, with my A Ghost Waits Closed Box Indie Wreckommendation. Oh, sorry, recommendation.

A couple years ago I brought you a brilliant little indie film called They Look Like People, that had an ending that literally blew my mind. I had really never seen anything like it before. Well, after that write up, I had the chance to talk with MacLeod Andrews and Evan Dumouchel about it. And today, I bring to you a crazy little closed-box indie that was co-written and lead by MacLeod Andrews. It’s a black and white concept movie with about a million ideas going for it. But basically, if you took Before Sunrise, made one of the characters a ghost? You might have A Ghost Waits on your hands. Or, possibly, if you took The One I Love and made it about preternatural hauntings, you might be on target. (Look, if you don’t know the Before Sunrise trilogy, or The One I Love… I just don’t even know how you got here. I got nothing for you.)

If you haven’t seen this movie yet, A Ghost Waits, you can find a location to watch it right here. But if I were you, I wouldn’t watch this trailer. Just, go, get the movie… and watch it. Thank you. Wow, that was much easier than normal… thank you.

I’ve already asked MacLeod Andrews if he’d be open to another interview and he was totally up for it. So I can’t wait to bring that to you.But first, let’s talk through this movie, and that surprising ending. But again, and I’m not going to say it again – do not continue on in this write-up unless you’ve already seen it. Alright?

As far as movie setups go, it’s literally the simplest movie in the world to explain. Jack (played by MacLeod Andrews – They Look Like People), is a handyman. And after a rental unit’s tenants suddenly went AWOL, he has been asked to run through his checklist, and make sure that the house is ready for the next tenants. See? Simple. And actually, there might be a problem with the house, why else would a family completely abandon it so suddenly? So, Jack is going through his checklist, validating everything works, and repairing the things that do not. One key detail, that explains Jack better than any exposition ever could, is the fact that Jack called around to several friends in order to find a place to crash for a few nights while he worked on the house. But no one returned his call, and the one person that answered turned him down.

Midway through his work on the house, we begin to see spectral chaos happening throughout the house. Doors opening. Lights turning on and off. Rocking chairs moving. You get the idea. But Jack had no idea what was happening. That is, until Muriel (played by Natalie Walker) shows herself and screamed at him to leave the house. It was her job, after all, to get him to evacuate the house. At first he left, but he forgot the keys to his car. So he returns to fetch them, and chooses to stay.

As the movie continues along, we learn some of the inner workings of the spirit world, and the expectations on Muriel and her work. Worse, because Muriel wasn’t able to expel Jack from the house, Muriel’s boss – Ms. Henry (played by Amanda Miller) decides to send another spirit, Rosie (played by Sydney Vollmer), over to the house to “help” Muriel do the job she had been charged with, but incapable of.

Eventually Muriel and Jack team up in order to dismantle Rosie and her attempts at forcing Jack out. And this bit was an interesting attempt at psychological manipulation, but it didn’t really land the punch for me. The click. The aha! You know? I expected a latch to trigger somewhere in there, and it never really did. I mean, they got her to leave, but it didn’t go like I thought they had set it up. There was a bump, a lovely set, but there was no hitter there, flying in from the back row 3 meter line. But I did see hints of the ending coming before they did… but in my mind I was immediately like – noooooo. That isn’t where this little film is going to go. And then I was like, well, that would break the mold, that is for sure. But, when it landed, I was still blown away.

Wait, I’ve gotten ahead of myself again. I hate it when I do that. (I really don’t… but you guys know that already. And at this point I’m just lying straight to your face at this point.) Eventually, we realize that Muriel and Jack are sort of at loggerheads. Muriel needs Jack to leave so that she can feel fulfilled at her job – which, she doesn’t understand why she needs… but she needs. And Jack, lacking any sort of love or appreciation in this life, has found someone (? – something? spectral?) to care deeply about. Eventually, Jack gets the affirmation he needs, and he heads out to the garage, pulls his car in, closes the garage door, and calls his boss. Obviously, his boss doesn’t pick up because he hasn’t been picking up the entire movie. And so Jack leaves a message apologizing for the mess. Then, in Jacks’ last few moments alive, Muriel joins him and comforts him as he dies.

I’m going to pause there for a moment. Look. This writing choice… this screenplay right hook… is brilliant because you can’t do this. It’s against all the rules of standard Hollywood screenplay writing. There are suicide prevention groups that are going apoplectic as we speak I’m certain. There are counseling groups that will moan about that one missed intervention. And yes, we all agree with both of these groups. Do we want Jack dead? No. We don’t. But we do want Jack to be happy, and he seems to be a person that has been completely missed in the shuffle of life. Where is his family? Why do his friends not want to let him crash on their couches? Why will no one call him back? Yes, it’s tragic. And yet, the screenplay’s ending is literally perfect in every way.

We shouldn’t be surprised by this though. If you enjoyed this movie, and you haven’t seen They Look Like People by  Perry Blackshear, you need to. (By the way, I really do think that we need to do a GoFundMe FORCING Perry Blackshear, MacLeod Andrews, and Evan Dumouchel to craft the next movie that pops into their heads. I don’t care what it is personally. It just needs to happen. I mean, you know they are the trio that came up with The Siren too, right? I mean. Give them a camera, hell, an iPhone, and let them go for it.) The ending of They Look Like People was so unconventionally brilliant… like genre breakingly good. I am sure I wrote like 4,000 words just talking about the insanity of that ending. And I should spend another 4,000 talking about the insanity of this ending. But I won’t, not this time. I’m too excited about getting this write-up done so I can start interviewing MacLeod. And yet, this right hook of an ending is perfect. It’s just not going to be perfect for everyone.

The Ending of A Ghost Waits Explained

I’m guessing there will be a few people that might not fully get what is happening at the end of this movie. No disparagement. Life is busy. You were folding laundry while you watched, and your son was playing Dance Dance Revolution on the other TV. No Dance Dance?? Just me? Oh, okay. Regardless, we seem to be watching movies in a more chaotic, and distracting world these days. At the end of the movie, Jack was hoping to get some sign from Muriel that she liked him too. He was, after all, considering committing suicide. And it would be a pretty unfortunate turn of events if he were to have killed himself only to realize she actually wasn’t interested in him. (Wow. That would be unbelievably sad! “Oh, you thought I liked you?? No. Not even a little bit. What now? Well, this is my house… get out!” No, not good at all.) But when she realized what he was doing on her behalf, she was really touched that he wanted to be with her that badly. And as the movie is winding down, we watch as Jack and Muriel scare the literal bejesus out of occupant after occupant together. And with that? We have our most depressing happy ending ever scripted in the history of film.

My Thoughts On A Ghost Waits

First, I have to get this off my chest. Someone needs to buy Michael C. Potter, the head of cinematography for this little film, a new tripod. The pans stuck and then sprang free every, single, time. It literally drove me crazy. They would have done better to just hand hold those shots and manually swiveled. It’s a stupid small thing. But, wow, it bothered me. I even wondered if they could have edited out the stuck swivels every time that they occurred. Or could they have started the pan early pre-shot? My brain was constantly working to try and figure out how to cut those stuck pans. And ultimately? The answer is just a $13 tripod from eBay.

Minus that? I loved everything about this movie. I enjoyed MacLeod’s surprising musical interlude… as well as Natalie’s. They brought a humanity to the film that reminded me of the Heaven’s To Betsy cover of Axeman that Izzy (MacKenzie Davis) and Virginia share in Izzy Gets the F$%# Across Town (link, if you haven’t seen it.) I thought the choice to go black and white fit perfectly, and probably helped lend a pile of credibility to the haunting ghost makeup. But heck, I’m a sucker for a great closed-box flick. So it sort of goes without saying it. And yet, I just did.

If some of you took the leap and watched this film on my recommendation… and you didn’t like it… I will definitely pay you back. Yes, I will do that RIGHT AFTER this little hobby film site of mine starts turning a profit. So, go ahead and submit your claim for a reimbursement, and I’ll file it away on the off chance that I start making some money here. Fair enough? (Chief, this site will be a infinite time suck in perpetuity… and just for the official record, if you file that form I plan to burn it.) Alright, what did you think of my, A Ghost Waits Closed Box Indie Wreckommendation? Did you dig it? (I will burn them all… I promise.)