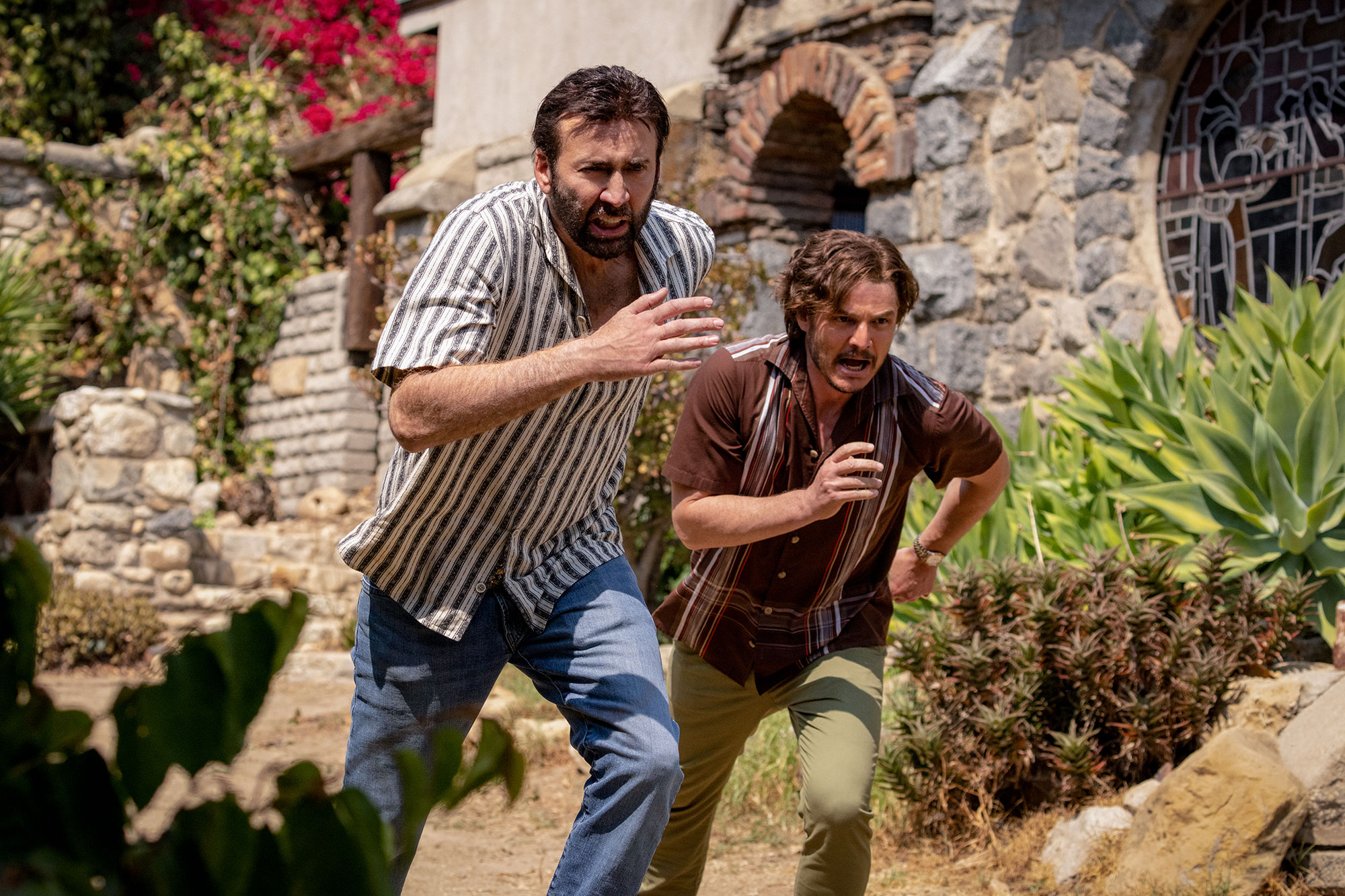 The Unbearable Weight of Massive Talent Movie Unpacked. Nicolas Cage is a legend. This goes without saying. He’s done about a billion action movies, The Rock, Face/Off, Ghost Rider, Kick-Ass, National Treasure, Gone in Sixty Seconds, etc., etc., etc. But he also, of late, wandered out into THiNC. land with movies like Mandy, Pig, and Color Out of Space. Even if you aren’t a fan of his work, it’s undeniable that the guy is an oversized actor. So, it’s really pretty funny to see Nicolas Cage attempt to play himself… which, some would say, he’s incapable of not doing. Who knows. But you have to admit, it’s going to be a funny, crazy ride from beginning to end in the attempt anyway. Which is probably where my biggest complaint about this movie lies. But we’ll get into that later.

Nick Cage is a struggling version of himself. He’s been skipped for a number of major films – and is dying for another decent role. So, already, instead of this being reality – we are in an alternate reality of events. Right? I mean, it could be that Nicholas Cage has had moments, somewhere along the trajectory of his career, where he wondered if he’d get another job. Maybe? But immediately, the movie sidesteps reality, and asks Nick Cage to play role of a character named Nick Cage… a character of a movie actor, a character of a movie actor who was sliding out of favor and starting to get passed over for roles. On top of all this, his relationships with his ex-wife Olivia (he was never married to an Olivia. Patricia, Lisa, Alice, Erika, and Riko… but no Olivia) and his daughter have slipped into disrepair after neglecting them both. (In the real world? Nicolas Cage is a grandfather twice over, and has had 5 wives… cough.) Which brings us to Cage’s younger persona that rides around in his head, goading himself, pushing himself, admonishing Nicolas from settling. I mean, he is after all, a movie star. So giddy-up.

Which brings us to the million dollar birthday party invite. Nick is apparently up to his ears in debt. Needs $600,000 for his hotel bills. And the divorce… Olivia needs Nick to get his shit together… etc., etc. And seeing as though he just quit acting all together, he decides he’ll take this ultra-ambiguous birthday invite. He’ll go, tell some stories. Make the invitees laugh.

Nick heads to Majorca, and right away, we realize that the FEDs, or CIA, or somebody, is involved. Why? We don’t know? But Nick is now involved and he doesn’t even know it yet. Javi Gutierrez (Pedro Pascal) has invited Nick in order to get him to agree to be a part of the screenplay that he has written for him. But all of that is sort of superseded by the fact that “Mr. Cage” is incredibly despondent from having just recently quit acting. Regardless, Javi and Nick hit it off. And then, when Nicolas Cage goes into town to read Javi’s screenplay, he is nabbed by the two agents who then ask him to spy on Javi for them. Why? Because, apparently, Javi’s men recently kidnapped the daughter of a political candidate who was not very mob friendly, and the US government didn’t take well to that. So Nick needs to get access to Javi’s closed-circuit cameras to find out if Javi has the girl at the compound. Eventually Nick agrees to assist in the operation.

Sounds like a Nick Cage movie plot to me anyway. Insert a spy inspired incapacitating agent, an LSD interlude, and a bizarro world shrine to himself, Nick Cage, and we have all the makings of a laugh/action movie for the ages. In order to buy himself some time, he agrees to work with Javi to create a screenplay. And to that end, Javi sees fit to tell Nick’s ex-wife, and daughter Addy, that he’s dying, in order to get them on a plane and out to his house. And when they learn it’s just a stunt to help Nick emotionally heal so that he can create a script that isn’t “stunted” they pretty much melt. But at least it gets Nick and his family to start talking. Even if it was a pathetic first attempt.

Now. Because we’ve come to love Javi, it can’t be him who has kidnapped this young girl… we learn that it was Javi’s cousin, Lucas, that is the one that has actually kidnapped the girl. It’s Lucas that is the arms dealer. It’s Lucas that is up to his elbows in seediness. But it’s also revealed that the mob knows that Cage is working with the CIA. And the only way for Javi to survive all of this, is to kill Nicolas Cage. Simultaneously, the CIA tells Cage that the only real way out of this mess with his wife and daughter? Is for Nick to kill Javi. Hrmm. But after a stand off, the two men can’t bring themselves to kill the other. Then when they race back to the house, they find that Addy has been kidnapped. Insert a dirt bike chase, a car chase, some mindless gun firings, some helmeted bad guys and some random lines like, “don’t worry, he’s totally unconscious!” we watch as Vivian sacrifices herself to kill the henchmen.

Which leaves us with Javi, Olivia, and Nick (who is arguing with his own younger self who is begging his older self to run for his life) who need a plan… when Javi decides that Nick will walk straight in the front door. Something about the head of the cartel not being seen for 15 years, who knows what he looks like… mcguffin mcguffin mcguffin… it doesn’t matter. Ultimately, they are able to get to Addy and the other kidnapped teen, Maria, but they are discovered. Nick and Javi ultimately kill most of the bad guys, leaving Lucas injured but alive (important for the final climax, didn’t you realize this was only the penultimate climax??!?)

Off they all run, with bad guys on their tail to the American embassy. Javi having sacrificed himself for his soulmate, Cage. Regardless, Lucas manages to get a gun on Cage, but Cage’s ‘Movie Actress Daughter’ throws Nick a knife, and Nick uses it to kill Lucas. And Movie Actress Wife (played by Demi Moore) run into Nick’s arms as the theater erupts in undulating applause! And with that Nick and Javi celebrate their successes… but Nick let’s Javi go off to all the after parties… and Nick stays home with his family. Right? Proving that he’s internalized the tidy lessons of the movie. And what does Addy choose to watch? “Have you seen Paddington 2?” hahah. (It’s a reference to Javi’s third favorite movie… they watch and cry together… if you didn’t get the joke, then you haven’t seen the movie, and you shouldn’t be reading this write up!)

At the end of the day, The Unbearable Weight of Massive Talent delivers what the title suggest, a super unrealistic perspective on Nicolas Cage. I mean, The unbearable weight of massive talent? I work at a co-working location here in town (I work remote and enjoy the camaraderie of the office environment, I don’t think you care, never mind) and 99% of the people I talk to about Nicolas Cage, hate the guy. When I told them that my favorite movie of last year was Pig, they literally started throwing things at me. Violently. They think the guy is a hack, and can only “act” in one gear. That’s it. Well, this movie definitely proves their point. Even when he’s “acting” like himself, he is his technicolor persona. 100%.

But I’d argue that isn’t what is happening here. It’s a tongue-in-cheek effort. This movie is what would happen if you took the idea of Being John Malkovich (Talk about a movie I need to cover here on THiNC.) and bred it with The Hitman’s Bodyguard. Yes, that combination should hurt a little. And yet, the interesting thing going on here is that I can relate to this movie. I’m not a movie star, but I can relate to the disconnect between a father and his kids. To their feeling like you only care about your own things… your own favorite movies, your own favorite books… right? I have young teen girls in my house and I am Nick Cage to them. I work too hard to get them to be me, instead of me loving the thems that they are, how they are. I was regularly wishing that the movie would chill out a bit, and stop preaching. And yet… I found the insights somewhat, insightful, if a bit cliche.

But if you are looking for movies that will make you THiNC. that are helmed by Nicolas Cage, they are out there. Promise. But instead of Gone in 60 Seconds, try out Mandy. And instead of National Treasure 1, 2, or 14… watch Color Out of Space. Fair enough? Great.