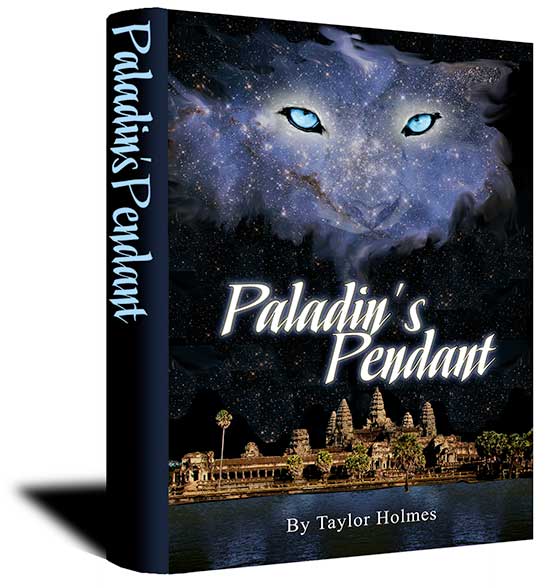 The animals of Ipslandia are completely broken.  It is an island at war divided by centuries of strife that go so far back no one knows why they are fighting anymore.  Famine has consumed the countryside.  War has stolen the country’s pups and also any hope for a future.  It is on this war torn countryside that Chat Chatterly is born and is now heading to the front.  One dark night Chat meets the most beautiful raccoon he has ever seen.  Her name is Twirl and she is a Pike, his country’s arch nemesis – and she tells Chat a story that will change his life and the future of Ipslandia forever.

Twirl is off on an adventure to find the mythical Paladin’s Pendant, a magical locket that could just give the wearer unimaginable power.  But there is the small issue that Chat doesn’t know if he can trust Twirl.  Everything has gone upside down now for Chat.  And all Chat knows is that he has to got to see this through to the end seeing as though he has now bet his life on the outcome.

It is a story cut from the cloth of Red Wall, and the Chronicles of Narnia with harrowing adventure at every turn.  Chat will face cunning riddles, and clever puzzles in order to stay one step ahead of both Kings who now find him and his friends a threat to their sovereignty on the island.  But will he discover the Pendant’s location in time to even make a difference?  Will he survive his decision to follow Twirl on this adventure? Paladin’s Pendant tells the story of this fantastic story and the only thing Chat knows for sure is that whether he survives or not, he knows his life will never be the same again.

Ok, so I’ve actually written two books since I last updated you all. But only one of them really has any real potential.  When I originally came to you and asked you to encourage me along – you guys failed miserably.  Eh? I hear you collectively saying.  Here, I have the proof right here:  Check it out yourself!!

And here are the stats for that particular blog post:

See, I figured you would see it my way if just given the evidence.  Hahah.  You guys totally bailed on me!!  46 people?  I can write a blog and sneeze and get 46 people in a WEEK!  And 46 people showed up in a YEAR?  haha.  I guess you guys don’t care about books nearly as much as you do about movies.  And complicated movies, I guess.

Regardless, as you can see by the updates on that blog post, NaNoWriMo completely derailed me. NaNoWriMo begins in November – and my work on Paladin’s Pendant ended just as NaNo was starting.  NaNo was something I’d always wanted to try and so last year I did.  Don’t know about it?  Find out more here.  So in the month of November last year I went on a TEAR and wrote a little more than 72k words of a book called Glitches. 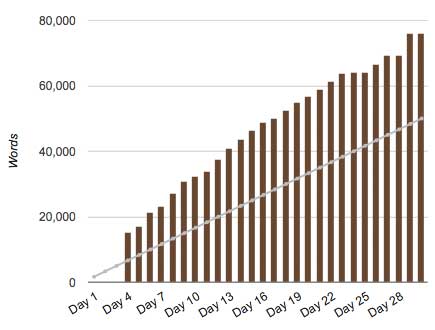 You can see my progress as I wrote every day last November.  It turned out to be a cute little book about a group of people with super powers and the struggles within this secret society.  Ok so it was more than a little rough, and fairly crude.  But it was fun to write 72k words of ANYTHING really.  And maybe it will get totally reconstituted as a workable idea someday.  Regardless, last October and November I wrote around ~150k words.  In Sixty days?!?  hahah.  Something like 2,500 words a day constant.  That’s crazy.  And you would know if you’ve ever tried it.  If you want to see my last year’s NaNoWriMo stats you can visit them here.

But the point of this article isn’t the NaNoWriMo book Glitches, but rather that original work I started a month before NaNoWriMo last year. So what the heck happened to that thing?  Well, if you’d like to see the current status of that book idea, you can see it right here: 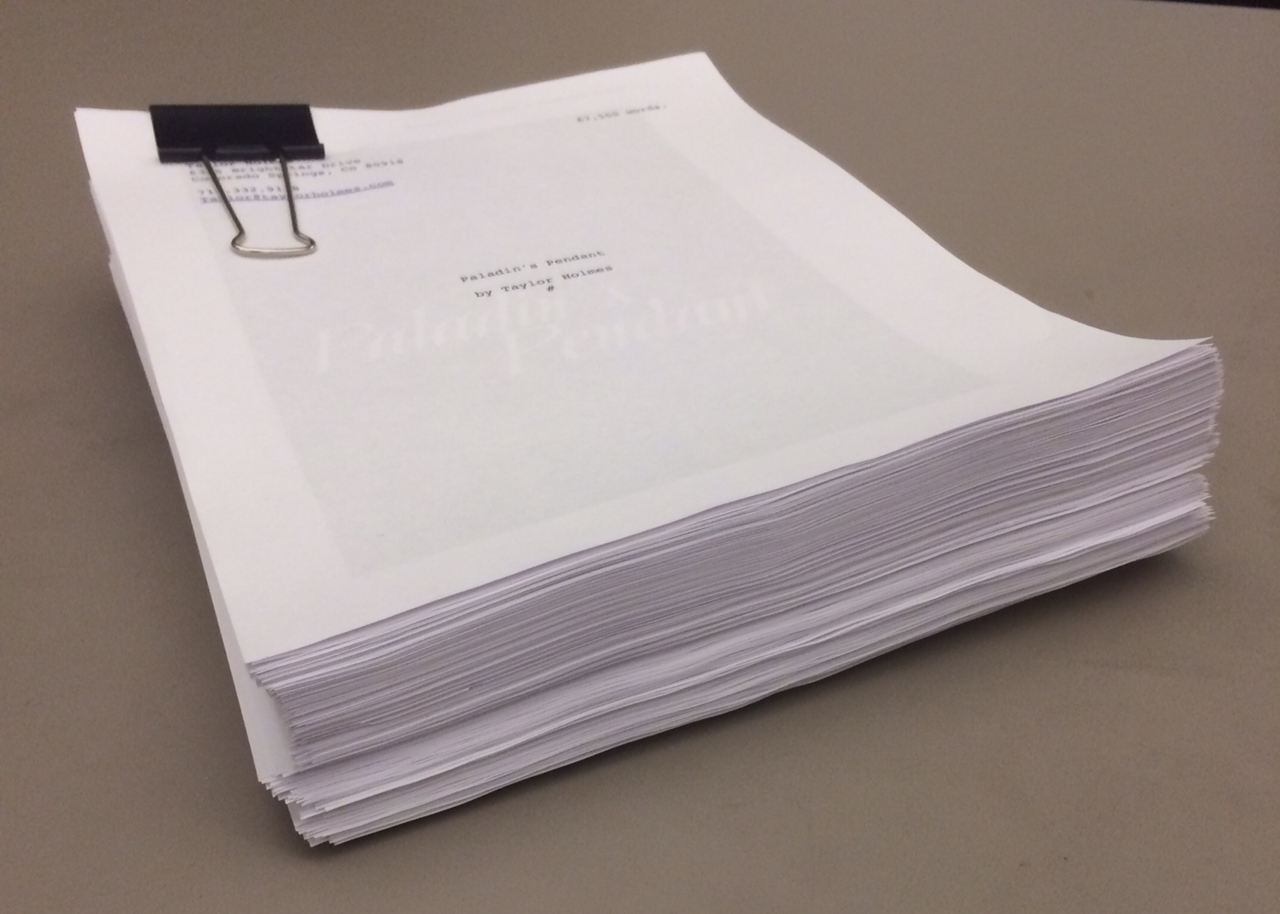 That is a 316 page manuscript printed out there.  It’s done.  And its sitting right at 68,000 words, plus or minus.  Well, it’s done as an official draft anyway.  All I know is that the original story arc for book 1 that I wanted to tell is finished.  Its obviously not a finished book though, because I have to edit it, and weave certain threads into it that I need to highlight and clearly enunciate.  I also need to tie up a few loose ends that I just abandoned along the way.  But nothing enormous.  The English editing will be a heavier lifting than the logical issues.

Coming up in a couple of weeks will be my second attempt at NaNoWriMo.  My hope this year will be to tell the second story in this world of Ipslandia and the Color Island.  At least right now anyway.  I have another book boiling in my brain right now, but my hope is to hibernate that novel until after I make some significant progress on book 2.  We’ll see.  (But that other book idea is really really good.  Gah!  hahah.  And I’m dying to find out what happens in that one, just as much as this one.  So we shall see.) I really would like to see a three book arc completed in the world of Ipslandia.  I already have a much larger story built in that has hidden behind the first book… just outside the lights of this main story.

But regardless of where this story goes I posted a bucklist blog posting a while back (That you can find here.) And I can confidently say that yet another bucket list item has been accomplished.  (I guess you could say that Glitches met that first bucket list criteria, but it really was shite at the end of the day.  So I’m much happier with this particular check mark, more so than the last check anyway.)

If you are an agent, or know one interested in a book like this – I would love to talk with you.  I am currently working with a good friend from a local Publisher (who would never publish this book in a million years) that is interested in pushing this book.  But I am always open to talking to anyone that might be interested in seeing this book get to print.  I still haven’t decided on whether I will self publish it or not.  I may just do that as an interim step.  But ultimately I’d like to see it find its way to a publishing house.  But I wouldn’t mind if this book went the Wool Path!  hahah.  Thanks all for your support!