Yesterday I posted a woeful tale of running out of content. And I did. But then I fell in love with a new website, which reminded me of another website… and I sensed a theme happening here that I wanted to talk about a bit.

First, two things. I loved the movie Ex Machina. You should see Ex Machina if you have not. Ex Machina is basically a play in movie form with three key characters. The creator of a new AI and robot has invited a developer to come and evaluate the quality of the AI. So we have Creator, Robot, and Evaluator. Got it? Kinda need to understand this before we move any further Good.

The next thing you need to know is that Mr. Robot is a television show with the worst possible name on TV right now, but the best writing happening right now. The best. So very very good in every way. Basically the television show starts with a disaffected loner and hacker wünderkind Elliot who is starting to get looped into a hacking group called FSociety. Which is a thinly veiled reference to Anonymous.

Both of these movies/shows are heavy technology-centric experiences. Ex Machina goes so far as to include very real code written in the movie that is executable. Mr. Robot is without a doubt, the single best visualization of what its like to be a hacker without all the normal Hollywoodizations that they normal subject hacker stories to that basically dumbs them down to unwatchable levels. And because they are heavy technology-centric ideas it makes sense to pander to the technology loving among us by the development of corresponding websites that take the experience to an entirely different level. 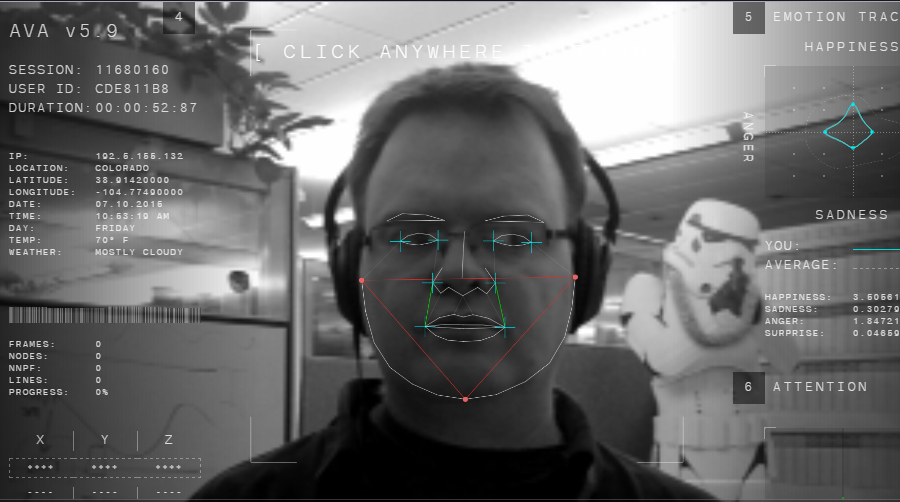 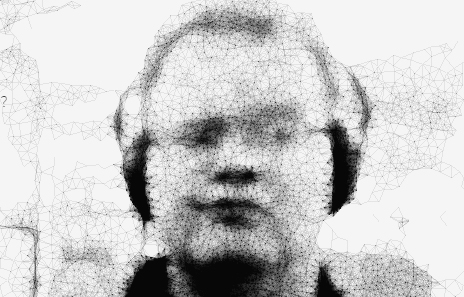 Ex Machina’s website can be found here – and it is a really mind altering experience. So much so, that you wonder how much control you should give the site/game/hack job. Reminds me of the game alfa-arkiv game wherein the line between “game” and “reality” is. In this interraction, Ava takes a photo of you and turns it into a million disparate points… and I have no idea how the solution does that. Like, not even a guess. Its quite brilliant. Here’s how mine turned out.

Ava also uses your location information from you IP address to try and strike up a minimal conversation about you and the weather. “Taylor, it looks like its overcast out today, are you feeling down?” That sort of a thing. But its very very primitive at best. Mr. Robot on the other hand takes this conceit to a whole different level at their site, Who is Mr Robot? 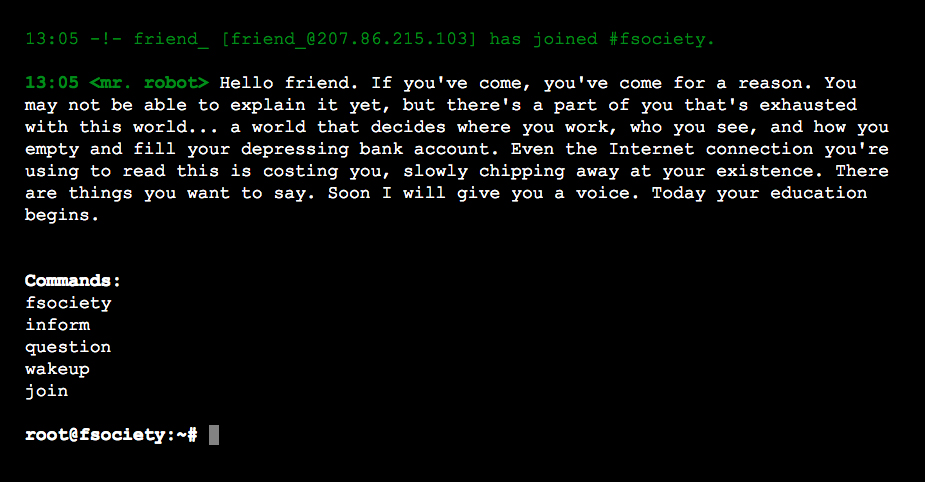 And once you start jumping around the system, you start to find some really very clever dialogues that start to unfold… or maybe monologues is better stated. And the feel like they are lifted straight off of an Anonymous IRC board they are so legit. And here is one of the examples of the “puzzles that they throw at you… I won’t tell you the trick to it. You’ll have to play for yourself first. 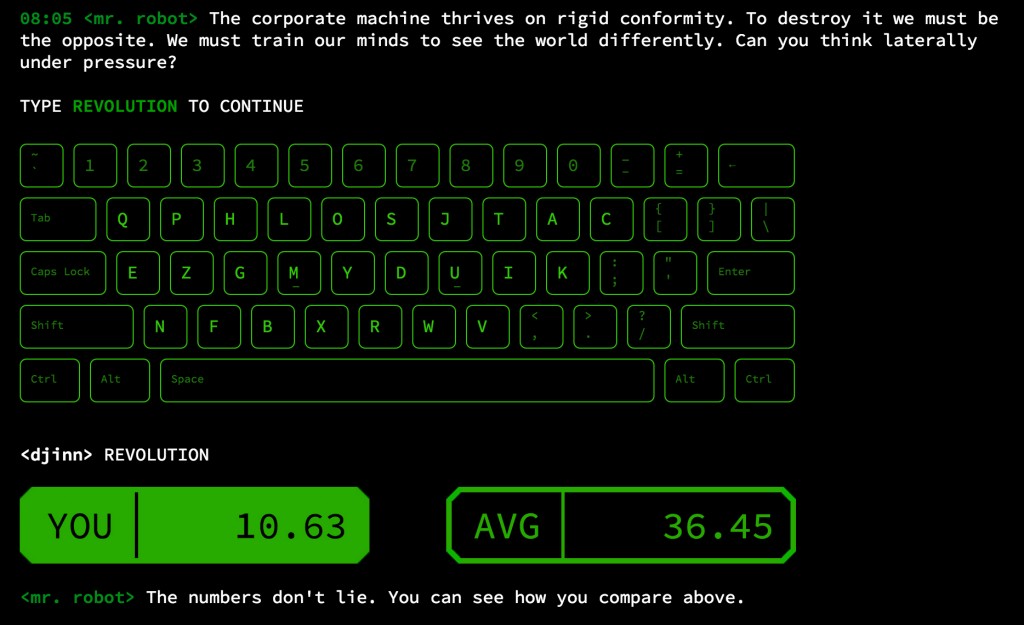 And the tests and the indoctrination just continues and continues. It is pretty intense the types of questions they throw at you the further along you go. 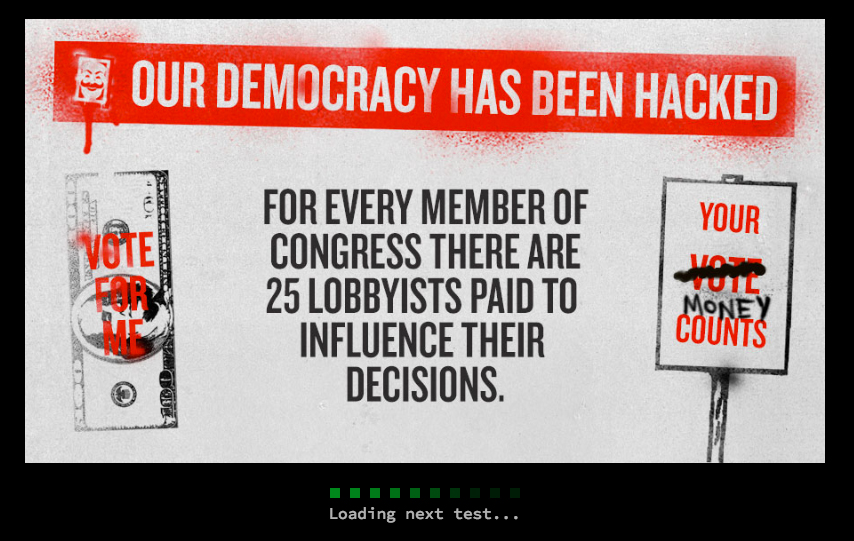 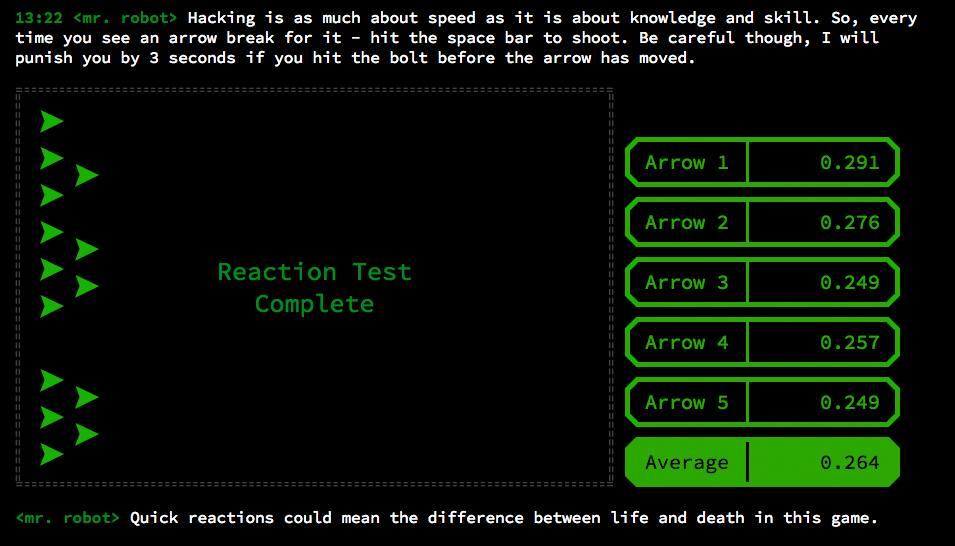 Can you beat my reaction time average score of .264? Probably, in like half a try! hahah. But you really do need to check the website out because it really burrows deep into the mindset of the television show and it is quite fascinating actually to consider some of these questions that they throw at you.

Mr. Robot is my new favorite show by a factor. And I don’t watch TV – no feed to the house. So I have to go through hoops and hurdles to be able to watch it, and I do it because its so good. But what I find so interesting is this new generation of websites that are so immersive and supportive of the show itself. They have gone to new lengths to promote the show that aren’t cheap. I’m sure they spent around a hundred grand a piece or more developing these websites just in the hopes of more guerilla marketing for their content. You should check them out. And if you hear of other sites like this, pass them along… I want to check them out.

Oh, and I’m still waiting for your blog article ideas/challenges!