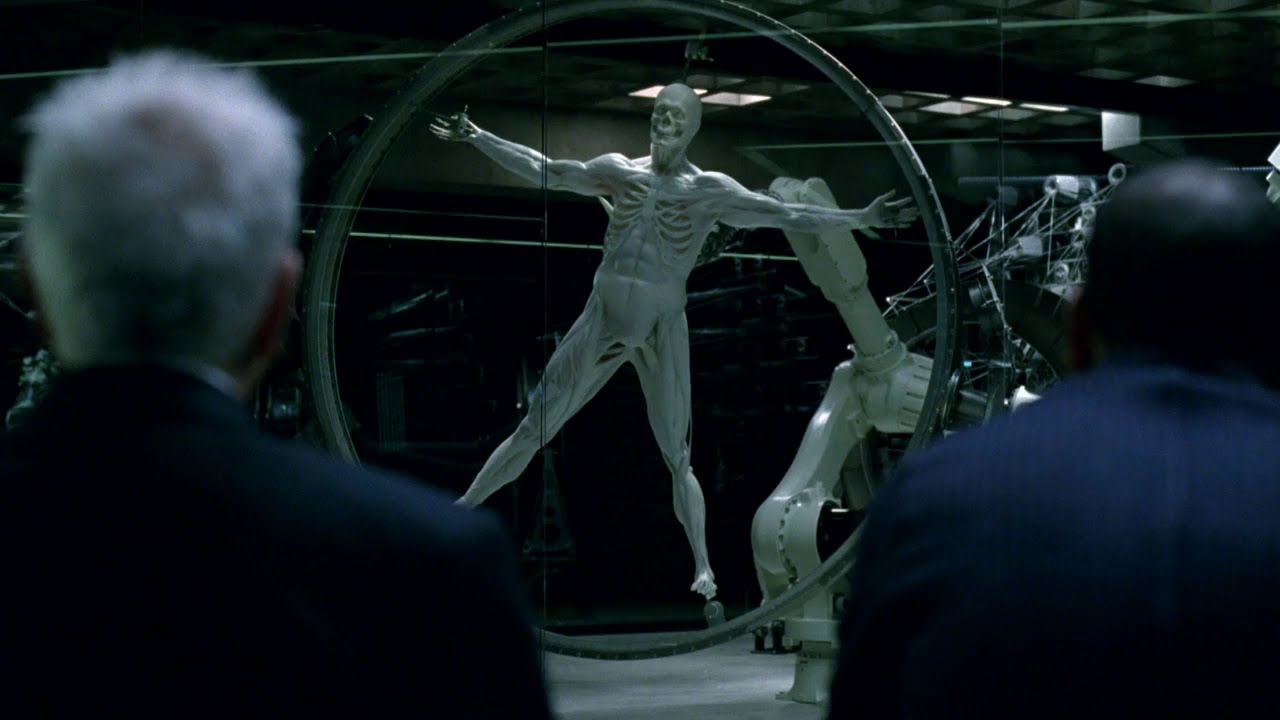 Alright, I tried to stay on top of every single episode as Westworld released new shows each week. But with all the other things going on out here and great movies to watch and review. And excuses for my slacking to make. I wasn’t able to get this done when the episode originally aired. And while this episode was interesting – it wasn’t revelatory at all. But because I disdain seeing this episode missing from my perfect ten episode review run, I’m coming back to it in order to get it in the list. 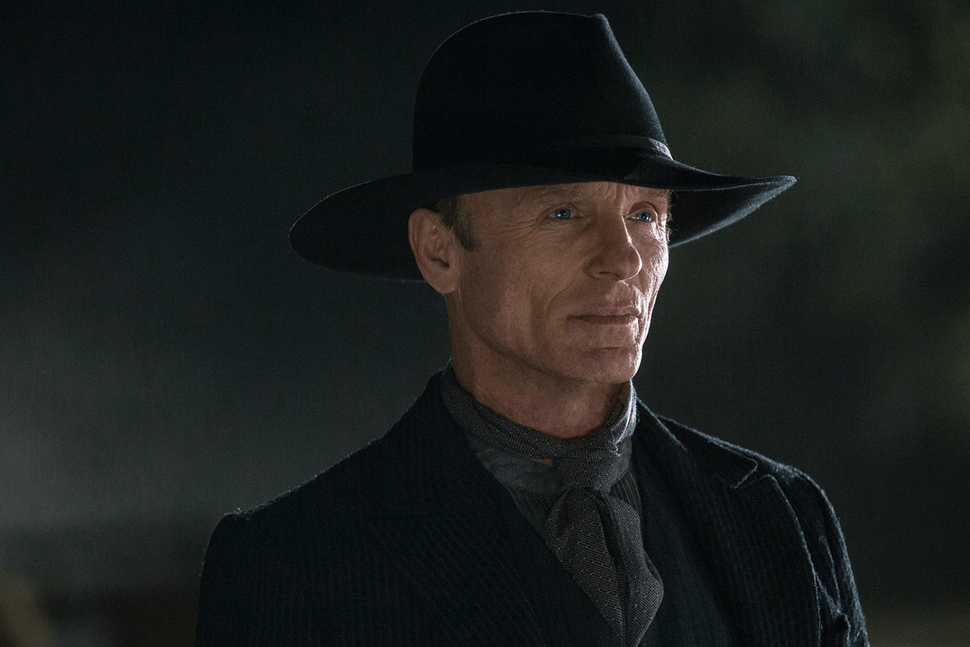 In the episode’s opening scene Bernard (who we learned last week is a host) is distraught over his murder of Theresa. While reassuring him, Ford quoted a line from Mary Shelley’s “Frankenstein.”

“One man’s life or death were but a small price to pay for the acquirement of the knowledge which I sought, for the the dominion I should acquire,”

And after having Bernard kill Theresa last week, Dr. Ford asks Bernard to delete their tracks and clean up the murder from an evidenciary standpoint. (Good think Bernard doesn’t work on any of the cases that Serial has tried to follow up on after the fact!) And then following that, Bernard has his memories of killing Theresa deleted in order to “free him of his memories”. Or maybe a better way of putting it – Bernard, you delete the evidence, and then Bernard… I’ll delete you. Good? great.

Dolores and William and the larger Ghost Nation/Wyatt plot line continues – “come find me”. And as the season progresses this will make more sense from a sheer timeline perspective. One of the best details of this section is why Dolores grabs her head and says, “When are we? Am I going mad?” Which is one of the first indications that the Dolores/William timelines are off somehow.

Maeve has begun to do a real number on Felix and Sylvester (You did catch the significance of their names right?) in order to get up to the Behavior Department so that she can make changes to her profile and details. This will be extremely significant the further along we get. While I first thought that Maeve was a bit character in the Westworld world, I’ve begun to realize that, second to Dolores, she will be one of the most important characters in this show.

I had completely forgotten this particular detail, but Charlotte uploads more than 35 years worth of AI data that she took from Ford and uploads it into Dolores’ father. Right? And then she tells Lee (the wannabe Ford creative replacement) to write a story justifying his leaving the park. But nothing came of that thread at all did it?

We also learn that the Man in Black actually did get married at one point. But his wife committed suicide. They had had a daughter
Man in black was married, a daughter. Wife committed suicide. But it’s also during this episode that we learn that William is a “titan of industry”. And not only that, but that he owns Delos and Westworld. We aren’t exactly clear what this means. Is that a board seat? Outright ownership? But he did literally say, “I own this place”.

And in a very “Dark City”-esque switch… the Man In Black is the one that took Maeve from the countryside, took her daughter from her, and made her into the head of the brothel in town. Was it a test to see what it would do to her memories? Was it an attempt to break her? Give up information on the maze maybe? We do learn that it is Maeve and her daughter laying in the middle of the maze in all those photos that we see of it.

Westworld Episode 8 and the Future 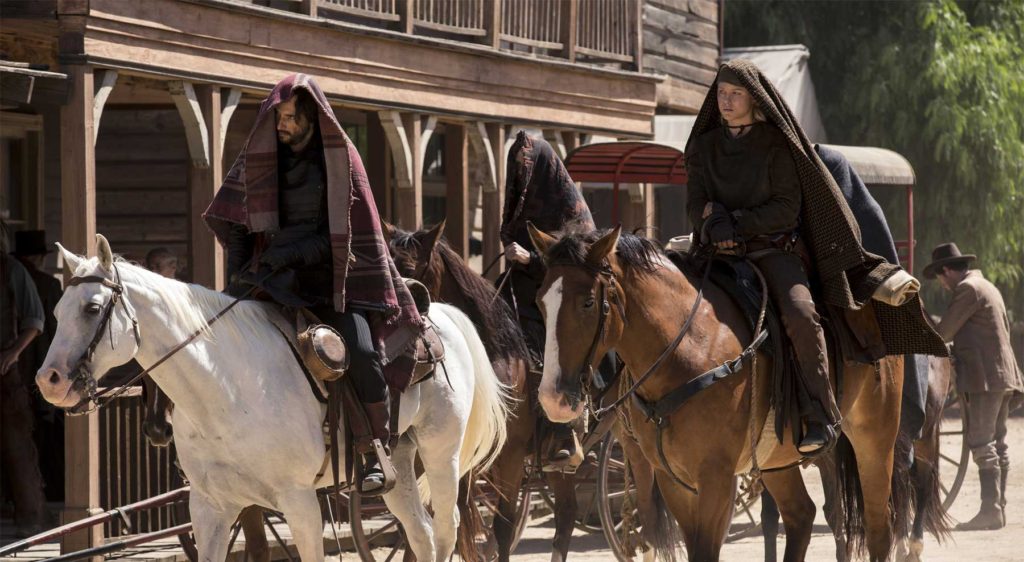 As we barrel in to the end of the season one thing becomes startlingly clear, and that is that the Man in Black, regardless of how confused he is, or how mean he is, is a truly important character. We have probably learned more about his life outside of Westworld than any other Character in the show. Historically, we haven’t been able to ascertain much about any of the backstories outside of Delos and the park. But the MiB has yielded quite a bit. He is a great businessman, and the majority owner of Delos. He also was married and had a daughter. Although, something may have happened to her as well what with how many hours, uninterrupted he spends in the park.

We also are starting to see that Maeve is really up to something big. In my notes for this episode it was the first time I realized that it would probably be Maeve that would go wake up the decommissioned hosts in the warehouses of Delos. That she would definitely be reconnoitering her way into the laboratories in order to find more information out and to also pull together reinforcements.

I did just recently find this comment by James Marsden about the planning and the direction of the entirety of the show. Not just season one, but all five or six seasons and the overall arc, which I find incredibly encouraging.

“It wasn’t about getting the first 10 [episodes] done, it was about mapping out what the next 5 or 6 years are going to be. We wanted everything in line so that when the very last episode airs and we have our show finale, five or seven years down the line, we knew how it was going to end the first season — that’s the way Jonah and J.J. Abrams operate. They’re making sure all the ducks are in the row.”

Such a great show. So inside out. And such great potential.