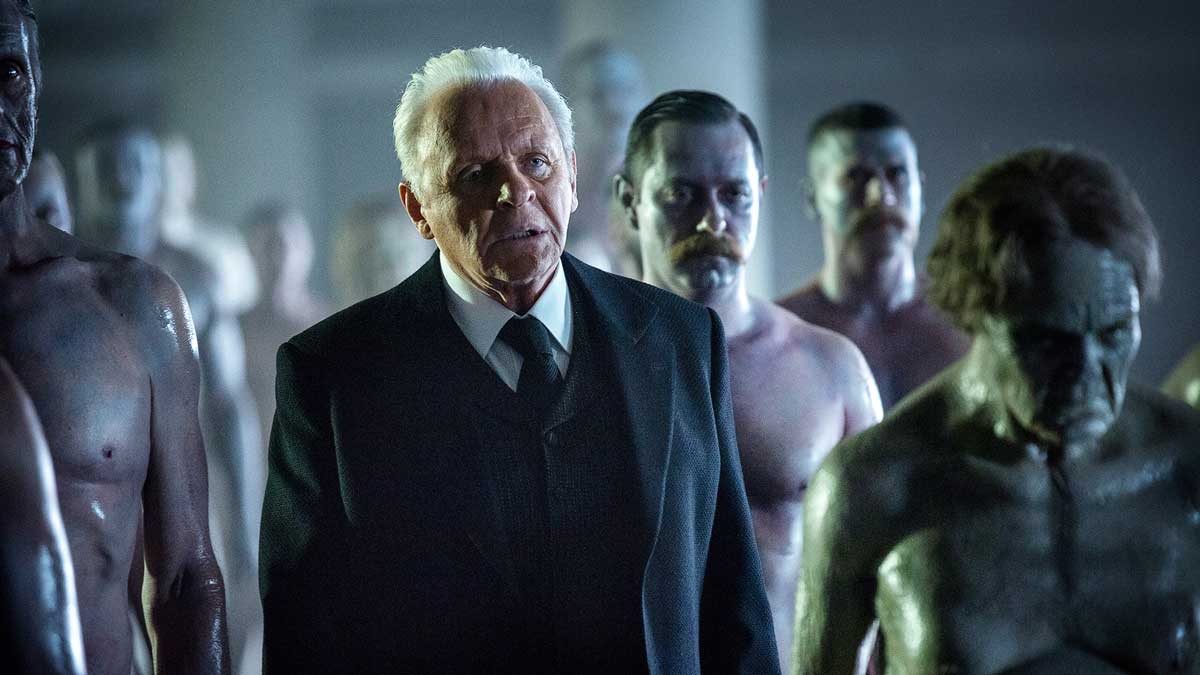 The first season of Westworld is drawing to a close, but not before the big daddy pyrotechnics start going off. We’ve had 8 episodes so far to set up these sucker punches – and boy did they do a fantastic job catching us all flat footed. I seriously do not care how much you saw these things coming… (which I have predicted some of these reveals since the beginning) they were still extraordinarily mind blowing to watch them play out. And with Episode 9 we got one reveal after another as we barrelled through to the end of that episode.

Magic happened in this episode. All kinds of magic. Even as The Well-Tempered Clavier opened we get a fascinating conversation between Maeve and Bernard. And she almost smelled his cyborg-ness on him. No? Anyone else get that feeling? And eventually see Maeve use voice commands on Bernard to force him to do what she wanted him to do (which was to clear her back into the park in spite of her hacked personality levels). She also tells Bernard to go in search of the entire truth… that there was a lot more to this story than he actually knew. And sure enough – he does. But I’ll get to that later.

Then we jump over to Logan, who has both William and Dolores tied up after last week’s episode. Logan ends up stabbing Dolores and showing her inner mechanical workings to prove to William she isn’t real. William tells Logan that he still wants to break Dolores out. But ultimately Dolores pours cold water on that idea by saying, “why are you assuming I want out? If it’s so wonderful out there, why are you all clamoring to get in here?” Things get pretty out of control between Logan and Dolores as she tells him, “There is beauty in this world, Arnold made it that way, but people like you keep spreading over it like a stain.” Soon after Dolores begins killing people all around her, and even cutting Logan in order to get free. William yells out to her that he will find her later.

After Bernard’s interaction with Maeve he goes looking for Dr. Ford to find answers. And ultimately Bernard informs Dr. Ford that “the most elegant portions of my code weren’t written by you, they were written by Arnold… which means he had something else in mind for us.” Bernard brings Clementine in and has her hold a gun over Dr. Ford in order to force him to release his memories. “Send me back, after all, a little trauma can be illuminating.”

Cutting back to Maeve (my new favorite thread throughout the season so far) we see that she has gone in search of a hired gun to help her break into Delos. “I want you to break into hell with me and rob the gods blind.” And she convinces him – in a very hardcore sort of way, by showing him that the save is empty – that he is a pawn and that he would do better to join forces with her. And Maeve and Hector begin making love when Maeve kicks over the lantern in order to gain passage back into Delos.

The Man in Black wakes up tied with a noose around his neck, and it looped up through a tree and over to a horse. Charlotte, wearing modern clothes, comes looking for the Man in Black – which infuriates him. “Theresa’s death has been ruled an accident.” Charlotte was wanting to get a unanimous vote from the board in order to go after Dr. Ford. And apparently, the Man in Black is a fellow board member alongside Charlotte. Which, I’ll be honest, I didn’t see coming. The Man in Black tells Charlotte he doesn’t care what he does – and since his path isn’t through Dr. Ford’s stories (most likely referring to Arnold here) he didn’t care what she did to Dr. Ford. But that she was to leave him alone.

Which is when the real fireworks begin in earnest – because that is when we start to really see Bernard pushing Dr. Ford for real answers. And boy do we get the answers. 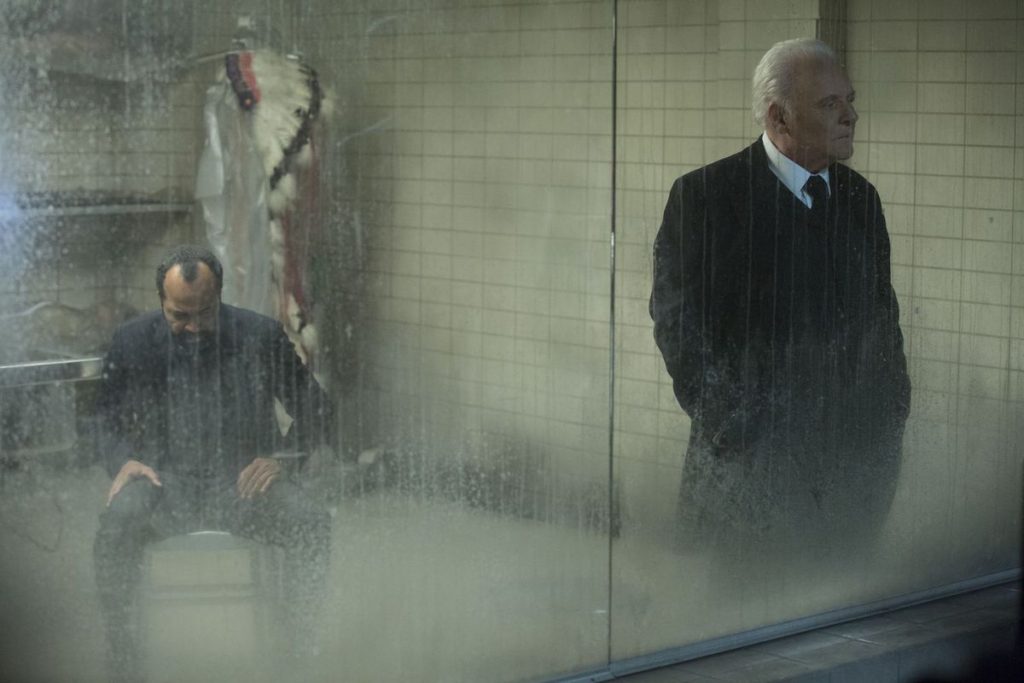 Through as series of 3 different flashbacks Bernard learns that Charlie was all an embedded hoax in order to create authenticity. Apparently Arnold believed that past pain was the best way to convey realness. And thus Charlie – and Charlie’s death. “Charlie, the pain of your loss is a lie. But I have to let you go.”

In another flashback we learn that Bernard is actually Arnold. As I talked about it past episode recaps – we had pretty much already figured this out because Bernard Lowe is an anagram for Arnold Weber. And so Bernard is the android manifestation of the now dead Arnold. (Which, I GUARANTEE YOU he isn’t dead. He is going to come back some how. Because that is the kind of show that Westworld is… but I digress.) Which means that ensconced in that head of Bernard’s is a whole lot of Arnold waiting to be let loose. And you know what? Maeve has Bernard’s number, which means the Android movement is soon going to have their creator (or his avatar anyway) back again.

The Well-Tempered Clavier showed us so many important things. So many huge things. We learned about the Delos board and some of its internal structures. We learn more about Dolores and her backstory. We learn a whole crap ton about Bernard and what he’s all about. There’s a ton that we learned.

The Man in Black is a Board Member

In episode 7 we learned that the Delos Board was a very very big deal. Charlotte was coming through and making wholesale changes wherever she pretty much wanted to. And in episode nine we learn that the Man in Black (aka William – sure, I guess he could be Logan… but that would be stupid) is a board member. He obviously has voting power on the board. Which, actually doesn’t rule out the fact that he might actually be the president of Delos. No. Do most companies give voting power to sitting presidents on boards? I think they do don’t they? Could an expert in Board-Memberness give a shout in the comments and fill us all in? I really wouldn’t be too surprised if the Man in Black turns out to run the entirety of Delos.

I’ve been commenting on this for a couple weeks now, but it seems to be pretty clear that we are seeing Dolores and her storyline as it crosses multiple decades. Usually we see cross-cuts of Dolores where she is wearing a dress, and then wearing pants, interspersed, right? These scenes are specifically showing leaps of time. Well in episode nine we learn that not only have these cross cuts been playing out simultaneously, but that they have been showing us wholly different eras of the park. And not only that, but while Bernard hasn’t ever sat with Arnold and talked directly to him… Dolores has. And we learn who Arnold is through these leaps in time from Dolores.

Bernard is Arnold – sort of 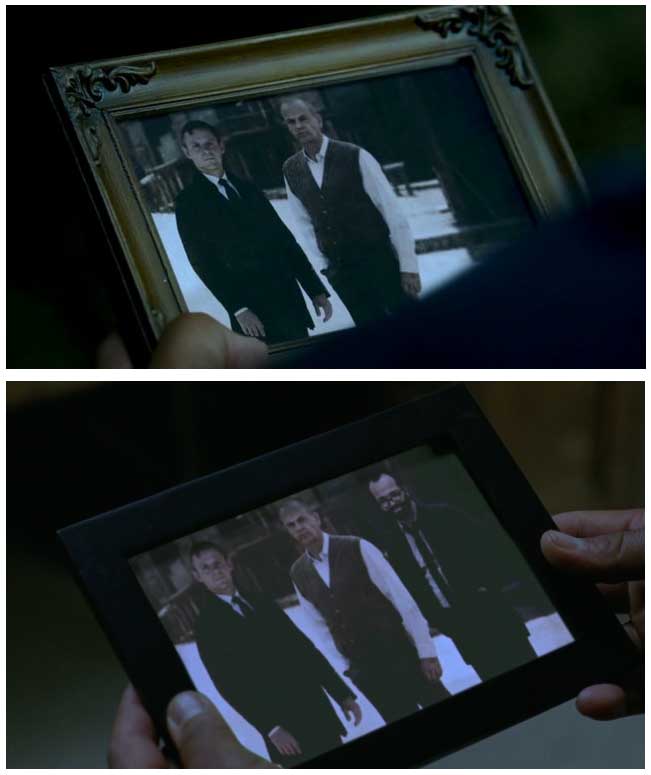 The biggest, most ENORMOUS thing that we learn from episode nine is the fact that Bernard is a copy of Arnold. Arnold created Bernard to be a physical copy of himself. Do you remember the photo that Bernard looked at that was of Dr. Ford and his father? There was a fuzzed out black mark on it that seemed a bit incongruous the first time I saw it. I know, because I paused it and stared and stared. But then later on we saw the unblocked photo showing Dr. Ford, his father, and Bernard. Oh, check that… it was actually, Dr. Ford, his father, and Arnold. Right?

Why was the photo blocked originally for Bernard? Well, remember that door that Bernard couldn’t see? Yeah, same deal – Bernard was disallowed any and all influences that conflicted with his back story and operating system. And seeing a photo of himself as Arnold? That would have definitely conflicted for sure.

Right, so Bernard is Arnold. Or a replicant version of Arnold anyway. Which explains Bernard’s fascinations with the hosts, their emotions, and their bicameral capabilities. But our Bernard has been locked up with a false past and a memory limitation that Dr. Ford has been manipulating for years. And it may very well be Maeve that will be the one to really release Bernard’s (or more succinctly put, Arnold’s) full potential.

So, apparently, Abrams, Joy and Nolan have released a preview of Episode 10 and it looks seriously epic. Check it out. And then afterwards, read (or skip) my predictions of where Episode 10 is going to go:

Predictions of where Episode 10 is Going:

Years ago the marketing team that I worked alongside ran a Survivor competition for each week. They would guess who would win the challenges, and who would be voted out at Tribal Council. And they were terrible at it. Eventually I talked them into letting me participate. I was the first non-marketing team member and boy were they outrage when I ran the boards for an entire season. “You ARE CHEATING!” they yelled regularly, not realizing that the ads and the previews give a TON away ahead of time. But I digress.

So personally it’s pretty obvious where this ship is heading next week. We are going to learn once and for all that Dolores has been interacting with a young William who is also the Man in Black. We are going to learn a lot more about the corporate structure of Delos when all hell breaks loose. And the biggest, most enormous thing that will happen next week is that Maeve and Hector are going to reanimate the morgue of discontinued hosts. They will mobilize them and mayhem is going to rain down on Delos.  It will be a lot like Alien (Or maybe more like Aliens?) with the security team mobilizing to kill all the newly activated Androids. But the hosts will have their day before it is all over.

Which then means that Season 2 would begin with new security controls in place and a buckled down team intent on keeping things safe? Or maybe the show will follow in the path of the original movie that spent most of its time in the middle of the chaos and the confusion of the patients running the asylum. Who knows. But wherever Lisa and Christopher choose to go it will be one hell of a ride I’m sure. Can’t wait.