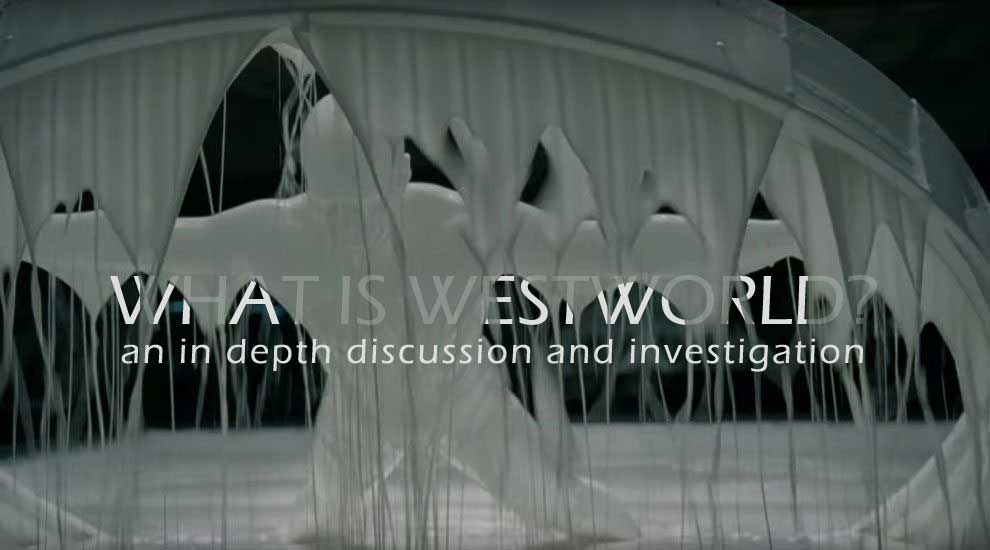 I started this in depth Westworld discussion and explanation walkthrough last week with episode #1. If you haven’t read and commented on that episode yet, please join us starting there! It’ll all make a lot more sense if you do.

Man I loved this episode. Everything is new. Everything is one constant revelation after another. And it’s only after episode 2 that I realize just how little we know about the entirety of the Westworld world. Even better? We don’t know anything about this future world that has been home to Westworld for the past 60 years. And yet, in this episode we see visitors coming into the park for the first time. We see someone leave (an Android at that) the park and walk out into world at large… or at least the Westworld admin buildings? Anyway, let’s do a quick walk through of some of the key highlights worth noting.

The episode begins with someone (I think it’s Bernard) asking Dolores, “Wake up Dolores, do you remember?”  And with that ep2 is off to the races by following the first time visitor William (Jimmi Simpson), and Logan (Ben Barnes) who is a repeat visitor to Westworld. When William asks his host Angela (Talulah Riley, Elon Musk’s ex) if the guns on the display counter are real, her answer is intriguing, “Real enough, but you can’t kill anyone you aren’t supposed to.” Which, when coupled with a scene from the beginning of the episode that completes later in the episode where Dolores is told by that same unknown person to walk out into the field and to dig something up. A moment later she uncovers a revolver… that I would guess, isn’t limited like William’s guns.

So with this new information we can assume that all guns work like they did in the original 1973 (which I detailed out in the last post) which was that they check the temperature of the person they are pointed at. Right? They are limited by the fact that they can never hurt a human. Well, William can’t. But Dolores apparently can now. Right?

Another theme we see in this episode that is important is that the technicians are beginning to wonder if these dissonant behaviors that Abernathy had were actually communicable. And their worries mirror the path of the movie to a T. The coding flaws were actually a virus that was spreading throughout the park. And we also saw that Dolores passed on the flaw to Maeve with the whispering of the phrase, “THESE VIOLENT DELIGHTS HAVE VIOLENT ENDS” Which, as I discussed last week, was from Romeo and Juliet and were spoken by Friar Lawrence and is foreshadowing of what is to come at the ending of that play. But also speaks well of what will be coming as a result of the decadence and license the park has allowed for the past 60 years or so.

The other key point is that we see that Bernard is up to something when it comes to Dolores. At the least, he is having conversations with Dolores that he is asking her to delete. We know that she is the oldest of Androids working in the park… and so she may have a special place in his heart. He could also be giving her distinct instructions that assisted her in arming herself with a real gun to protect herself possibly from the Man in Black? Or, could it be even more deeply rooted in that Bernard is actually a sesationalist? (Separatist? I don’t know what to call them. I am assuming that there is a faction that is working on the behalf of the Androids and that they are fighting to free themselves from the overlord-ness of Dr. Ford and the park.) Regardless, Dolores’ question back to Bernard (which he doesn’t answer) is interesting and fairly important, ‘Have you done something wrong?’.
Oh, and we learn that Maeve is marked for decommissioning due to underperformance? So that is another important rule that we have learned which is that Androids that don’t entice the visitors towards their storylines are slated for retirement. Or maybe not retirement, maybe they are locked down in those same warehouse that we saw Abernathy locked up in during episode 1. Regardless, Maeve is given a tune up by the technicians and she seems to turn around her possibilities. But it’s during a medical surgery outside Westworld that she wakes up and escapes out into the wider world and the offices of Westworld. And it’s the first time we’ve seen anyone cross from Westword outwards. Apparently Maeve is going to be an incredibly important player in this larger and expanding story. Especially since we now now that she has had a daughter, and lived as a homesteader further out of town and that she was attacked by indians and savages of some sort or other. Which speaks to a larger role in this story than just the Queen of the Bordello.
And we also learn that Dr. Ford has plans for a larger story line. “They don’t come for garish titillation, they come for the little things they think no one else has noticed. They know who they are. They come because they want a glimpse of who they could be.” Which is true of life as well. We want desperately to aspire to greatness. We attempt to be better in and of ourselves, always failing in the attempt.

1. Units that don’t perform are marked for decommissioning.
2. The guns provided by Westworld can only kill Androids
3. There are real guns inside Westworld that can kill anyone
4. It is possible for Androids to escape Westworld
5. There is a maze that leads to the lower levels of Westworld and a more intense theme park experience

Last week I discussed how I thought that the story was going to center around the Androids and their awareness, their cognition. And that it would be the awakening of the Androids that will start the revolution and the blacklash against the visitors to the park. Dolores now has a gun and will be able to fight back against the Man in Black. But more importantly, as the virus spreads from Dolores, to Maeve, and to others… and as they begin to realize the repetition of the park, and how these visitors attack them and are depraved in their actions, they will band together and fight back. They will find the discontinued Androids back in the Westworld headquarters, and they will rise up against Dr. Ford and his staff that has kept them in bondage all these years.

Which brings us back to the quote from Shakespeare quotes that Abernathy was want to quote:

Kill – kill – kill – indeed. The original movie was a massive bloodbath of Androids rising up against the human visitors. I think this will happen again, in an attempt to demand for themselves freedom against their tyrannical creator and overlords.