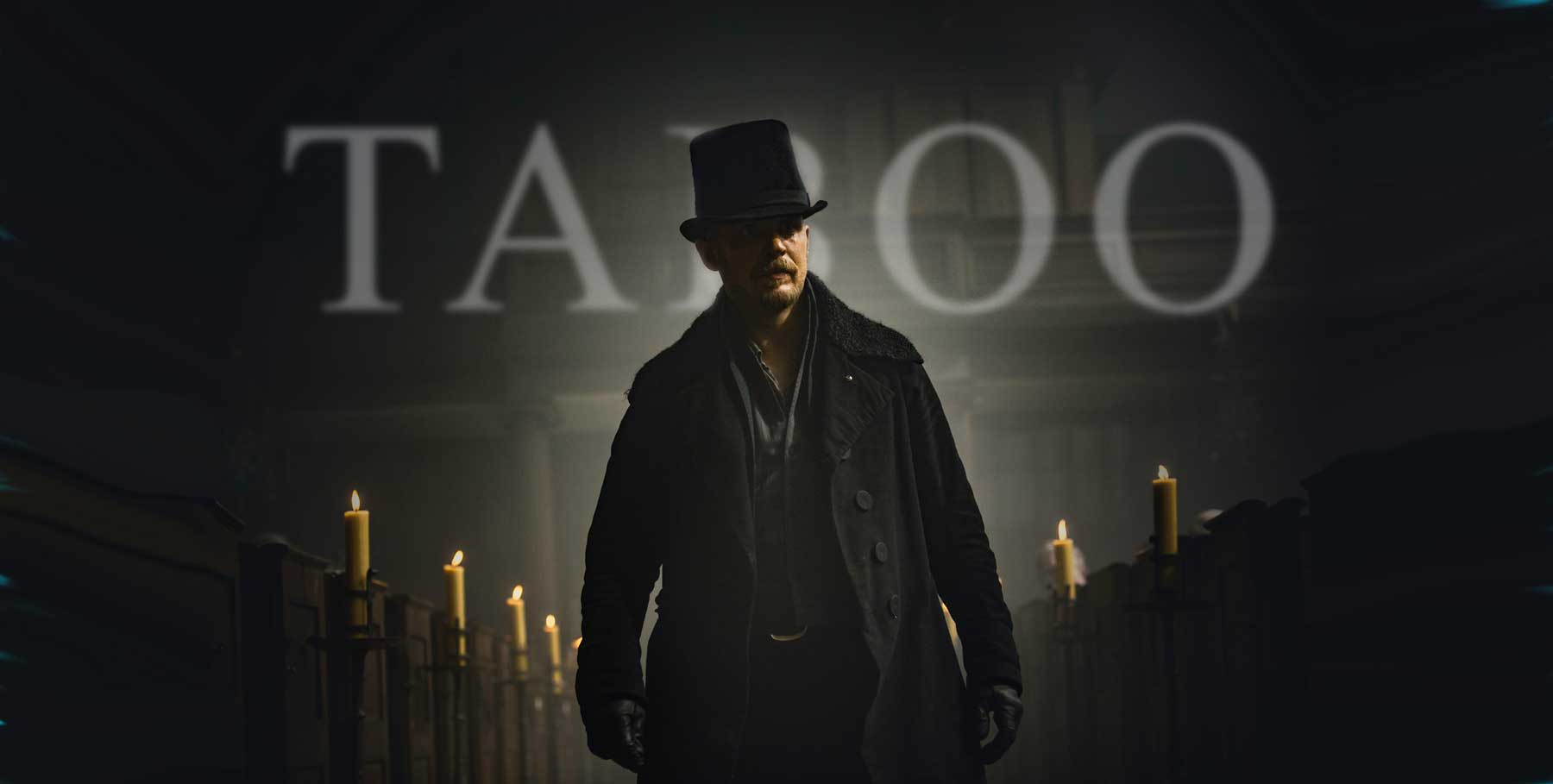 Oh yeah! That is what I am talking about! How is it that TV has begun to overtake movie-dom by telling more compelling stories and more riveting pot boilers? Case in point billion-dollar budget passengers vs. Netflix’s compelling spiritual- thriller-drama The OA. Not even a comparison. Passengers had everything, and yet came away as a massive flop. The OA had nothing but a wickedly clever idea? And it had everything. Everything necessary anyway.

So today I’m talking to you about a new show from the creators of the movie Locke, and Peaky Blinders (come on that is an amazing pedigree! You see the one man (Tom Hardy) driven movie Locke? Amazing writing! Amazing acting. Peaky Blinders?!? Done. You should be done and in now. Better yet, did you know that Knight only agreed to write Taboo if Hardy agreed to star in Locke?! This show has deep deep Hollywood roots)  Today I bring to you a show created by Tom Hardy and Steven Knight, Taboo.

But what is it? The show tells the story of James Delaney’s (Tom Hardy) return to England and his family after being gone ten, fifteen years. Delaney’s father has just passed away, and there are a million things in motion already.  Land disputes, old loves, national boundry disputes, the revolutionary war?! All are embroiled within this fantastic new show.  And while I would watch a show wherein Tom Hardy bags groceries… this story, this tangled web, looks absolutely astonishing.

As I did with the OA, and Westworld, I plan to do weekly break downs and walk throughs for each episode of the show Taboo. The format will generally follow the same standard layout. I’ll walk through the actual events of the show, discuss ideas and theories about what’s happened. And then I’ll go over ideas about where the show might be going. Ok? But it stands to reason, that if you continue on, you are wading into spoiler material from here on forward. I mean, I love the company as much as the next guy… but if you continue on and haven’t seen episode one? You only have yourself to blame good sir. 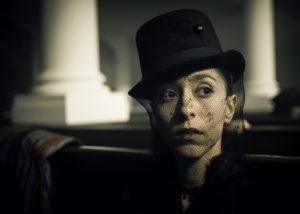 London, 1814 – The new show starts off simply enough… with the death of an older gentleman. Who is he? No idea at first. But soon we come to realize that James Delaney is his son. “Forgive me father, for I have indeed sinned.” And when our new friend James walks into the church for his father’s funeral the people in attendance go absolutely ape. But why? What is the story behind James’ recent return? Oh, nothing really, just that everyone thought James was dead after the ship he was on sunk.

But why does it matter that James is back from the dead? Well, as we begin to learn, James’ father, Horace Delaney had purchased a piece of land (“Nothing but rocks and trouble”) called the Nootka Sound in the Victoria area of North America. Wondering if maybe this was a real thing, and a real conflux of interests, I decided to look it up. Here’s what wikipedia has to say about the Nootka sound back around the turn of the 18th century.

“The Nootka Sound dispute began in 1789 when Spain sent José Martínez to occupy Nootka Sound and establish exclusive Spanish sovereignty. During the summer of 1789 a number of fur trading vessels, British and American, arrived at Nootka. A conflict over sovereignty arose between the captain of the British Argonaut, James Colnett, and Martínez. By the end of the summer Martínez had arrested Colnett, seized several British ships, and arrested their crews. Colnett had come to Nootka Sound intending to build a permanent trading post and colony on land previously acquired by his business associate John Meares. At the end of the summer Martínez abandoned Nootka and took the captured ships and prisoners to San Blas, New Spain. The news about these events triggered a confrontation between Spain and Britain known as the Nootka Crisis which nearly led to war.”

And then a little over 20 years later…

“The Spanish claims to the Pacific Northwest were acquired by the United States by the Adams-Onís Treaty, signed in 1819. The United States argued that it had acquired a right of exclusive sovereignty from Spain. This position led to a dispute with Britain known as the Oregon boundary dispute.”

In the show, we are told that the property is central to the dispute between the United States and Great Britain, and if the land is owned by a British citizen, then it helps to lay claim to the territory and would help give Britain a better border. So it is that the East India Trading company has been pushing to gain ownership of the land from James’ father, but he never relented. And before James was back from the dead, his sister (half sister actually – we’ll get to that in a moment) had negotiated the sale of the land to the East India Trading Company. But when the will is read, it all was declared to go to James, who was not dead anymore. Which caused all manner consternation with James’ old commander from the company.

So James starts going back through his father’s old documents, and accounts, and monies, in an effort to pull together his estate. He kicks out the prostitute that was running a brothel in his fathers office buildings down by the wharf. And he goes and meets with someone that has been taking care of a relative of his. Is that his son? Is that a brother? I’ll throw a pretty good theory at you below when we discuss possible theories. Don’t want to spoil it for those of you who don’t want to mistakenly learn something you don’t want to yet. And he is working to set something up. What will it be? It’s obviously some sort of company or business that James is launching. Can’t wait to see what happens with next week’s episode.

Look, I know nothing about this show. I went into this show completely blind. I hadn’t even watched the trailer a posted up above before seeing the first episode. So the guesses I’m about to make (though correct, I’m sure) are all mere guesses. But they are spoilers all the same. Potential spoilers if I’m right. So I know I warned you at the top about spoilers for episode one. These are potential spoilers for all of season one. And even season two. Ok? Great.

Where is this show going? – Well, I had never heard of Nootka Sound and the complications of the border disputes between Spain and England, and then later on between the United States and England that centered around this piece of property. So, it could very well be that most of the show actually finds itself on the Sound? Or, it could be all about James’ creation of his own shipping company and the offices he creates on the Nootka Sound? Which would then place him squarely at odds with all of the East India Trading Company. And while James is fullon, he isn’t a match for a company like that.

Who is the Boy? – James paid a pile of money for the man who was taking care of the boy. He seemed to be 14? 12 years old? Definitely of an age that he could be James’ son. If so, who’s is it? We know that James, when he was kicking the prostitute out of his father’s offices, we learn that James first sexual experience was with her. Could it be her child? No, she had barely any memory of James at all. You’d think if she had carried his child she would remember him better. But what if I do you one better?

What about James and his sister? – I think the boy is the son of Zilpha Geary and James Delaney. Who is James’ half sister. Thus her letter telling him to pay the extra two shillings to bury the past deeper, and to leave it untouched. She’s “happily” married. She’s glad to have the man she has and the estate that she has. Maybe she barely dodged a bullet getting pregnant with the boy, and James had to put the child up with someone quickly before he fled and joined the East India Company as a ship’s mate.

Who Killed Horace Delaney – We know that Horace was murdered because James had him disinterred and the contents of his stomach inspected. And sure enough, his father was poisoned and basically sent insane by someone. Who was it? Who killed Horace? The easy money is on someone in the East India Company as they tried to embezzle the land out from under Horace. But what about Thorne Geary? Could he be his own father-in-law’s murderer?

I am a new convert to Television. And yet, these shows (Westworld, The OA, Peaky Blinders, etc.) seem more like mini-movies than they are like television… like any at all. I sit and watch some of these seens in Taboo, and I see St. Paul’s in the background, and I’m like… amazing. Just amazing. Sure, some of the sets are a little sparse. But really? This is television? I am stoked about this show. And soon comes out Frontier? Which seems like a television version of the Revenant?  But I can’t wait to see what secrets and stories are lying just under the surface of Taboo. Stories about James’ time in Africa. His time to come in America. The works. There are a lot of stories to be told through these characters and this time period. See you next time.