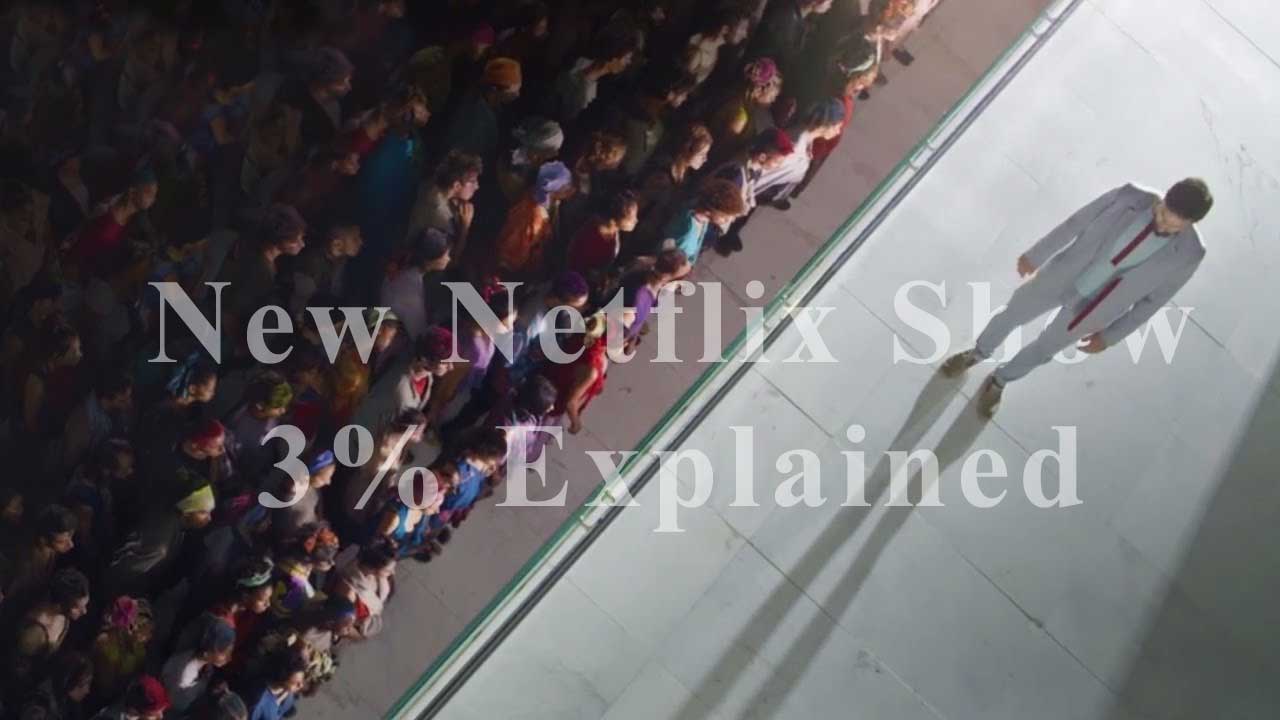 TV. It’s this box, in your front room. Maybe you’ve heard of it? Plays talkies and moving pictures and the like? But what is really impressive about these talking, moving pictures, is that of late, they are starting to rival the acting, the stories, and the production quality of Hollywood movies. By utilizing technology in order to push the boundaries of what was possible for less, I would argue that maybe, this box for moving images is the place to find new movie-like experiences? Personally, I care more about good writing and good stories than I do about high budget special effects. Which brings us to 3%, 3 Percent? Don’t even know. All I know, is that 3% comes from Brazil and it is eschewing big effects and production design and instead, giving us an amazing story. But first, huge shout out to the 5 or 10 people that told me I was completely missing the boat on this 3% business. Huge thanks!

Secondly, my plan for attacking this show will be very similar to how I went after The OA, Westworld, and how I am currently going through Taboo… which is basically, that I will watch an episode, and do my write up for the episode before moving on to the next episode. That way, if you haven’t seen the whole season, you can still discuss what we’ve seen so far without getting too much at once. It also lets you experience it with me as we discover where this crazy show is going episode by episode. And then at the end, I’ll do a high level over view and predictions for season 2, theories to explain all of season 1, etc. Make sense?

But first, if you haven’t seen any of the episodes for 3%, what is it? 3% is a dystopian show about a near future culture that tests for the best and the brightest of the country’s population. If you pass the tests, you will join the 3% of society at the offshore… their name for their utopian nirvana. If you fail the test, you are ejected back out among the lesser thans, the country’s 97%. It would seem that it is a very similar premise to The Hunger Games, without the cutthroat killing. Instead, it seems to be a more politically and intellectually motivated experience… at least so far anyway. Maybe the trailer will help you get a feel for what this show is about:

See? Pretty darn impressive. Oh, and did I mention that this Brazilian moving picture show was created by “City of God” cinematographer Cesar Charlone? Oh, did I also mention that 3% has been picked up by Netflix? A first for a Brazilian show. And oh, have I mentioned yet that I am in love with this show?!? Thanks again to everyone that took the time out to mention it to me. You guys have been added to my Last Will and Testament. No really. There is a lawyer in my office drafting it up right now. Bank on it.

Generally, my method for going through a single episode of a TV show is pretty standard. I start by walking through what happened in the episode and some of the more interesting tid-bits that popped out to me. And then we’ll go through the ideas and theories of where the show might be going, and why. And then theories about the show or deeper dives into the why of what is happening. Alright?

So as I stated above, the episode kicks off stating very clearly and very unambiguously, 3% of the population are accepted to go to live at the offshore… which was the name given to this Utopian Paradise segmented specifically for the best of the best in society. And once the 3% were chosen for the year, those new inductees would never be seen again. This seems to have created a rift of some sort with society as it has riven the culture in the haves and the have-nots. It has caused resentment and anger among those that have lost family members and most importantly it has caused fear pretty much with everyone.

“You each create your own merit!” Process Leader Ezekiel

Ezekiel is the one running the entire yearly process for the progression. He seems all powerful and unimpeachable. Except that there is an Auditor (Aline) watching the progression and seeing his methods for running the progression. And this is because someone was killed at The Offshore for the first time in over a 100 years. So there are cracks in the Offshore Utopia apparently… all is not as it would seem. Could it be that the selection process is broken? Could it be that someone vile has insinuated themselves into the Offshore and is a spy? A violent spy?

The Test and the Progression 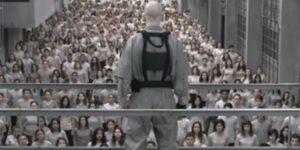 One of my favorite aspects of this show is the really clever ways in which the testers have been trained to root out weakness in the candidates. There doesn’t seem to be a set test in the interviews that are occurring. They delve and look for weakness and then drill in. Which, is my favorite way to interview people. Cast a wide net and then drill deeply as soon as you see something that doesn’t seem exactly right. Wait, does that mean I am a Utopian Bigot?!? gah. Anyway, my interviewing abilities aside. I really enjoy the tests and the ways in which all the various tests delve into all the different aspects of the psyches of the contestants, I mean applicants. Whoops.

For example, Michelle. The questioner wants to know about the necklace. She had willfully decided not to leave it behind (which, is important as we see later in the episode) and so it brought attention to itself by being there. And so the interviewer delved and learned that it was a gift from her boyfriend who passed across to the Offshore previously. (I all but guarantee we’ll see more about her boyfriend Luis Ferreira in a future episode. Have to. (But when I look for Luis Ferreiria on IMDB I don’t see him. Which seems like a lost opportunity. But we do see a Miguel Curi da Rocha Ferreira… is that a brother, father? Hrmmm.) Regardless, when they delve deeper into this boyfriend connection the interviewer gives her a chance to learn if he made it across, because, “Sometimes there are accidents, unforeseen circumstances…” And Michelle passes but, he tells her anyway, that in fact he did not make it… that he passed away. Did he commit suicide. Was he killed? Hrmm.

Then comes the surprising revelation that among the candidates, they’ve learned that there is a mole that is working for The Cause. And that is when we start to understand that this perfect process and perfect world isn’t so perfect after all. Some want nothing less than the destruction of the The Offshore. And soon after we learn that a mole is here a candidate that was denied jumps from the balcony and commits suicide at the feet of successful candidates.

Could it be that the mole is Rafael Moreira? Apparently his implant behind his ear has four stitches, and normally they use 3? And not only that, but Rafael is a dork because he stole someone’s cube, and only looked out for himself as opposed to helping others. Which is exactly what Fernando (the one in the wheelchair) does… he saves Michelle through his benevolence by creating nine cubes by stacking the 8 into a cube (8 cubes and 1 larger cube, nine total.) Is morality and relevant to the process? Apparently not as Rafael makes it through.

A Mole In Our Midst

This episode clearly enunciates exactly why clever writing is way more important than special effects and big budgets. Michelle and Bruna, best friends for life, are brought in under suspicion. Basically they believe that the mole is from the neighborhood that both of these ladies are from. And so they are given one chance to admit they are the mole or they both will die. 3 minutes to decide. And during that time Michelle convinces Bruna to attack the women simultaneously. We are both going to die otherwise. “On my count to three, we both attack.” Except that Michelle doesn’t attack… and Bruna dives on the woman killing her and herself simultaneously. Thereby removing the assumed guilt that was on Michelle only moments before. Only thing? Michelle really is the mole.

Come on! That’s great writing right there! No?

Are we even certain that there is a place called the Offshore? Could it be that instead of heading to this great beyond called the Offshore, the inductees were actually killed? Why did Michelle’s boyfriend die as opposed to progressing?

Where is Michelle’s boyfriend? Is he actually alive? IMDB would lead us to believe he actually is dead… or just gone for the first season anyway.

“If you fancy yourself a savior, then save the other person’s life because if you don’t… you are both going to die. I think this show is a very clever study in philosophy 101 and moral dilemmas. And I predict that these terrible prisoner’s dilemmas will continue occurring throughout the show’s first season.

“You all create your own merit.” Do we really? Is that what life is about? Is that society’s directive and purpose? There is something extraordinarily insidious in that assumption. Sounds sort of ok. Maybe? Except it’s evil in every way.

Needless to say, I am loving this show, and I am so glad that this write up is almost done so I can start watching episode 2. I have other shows that I had faith in that I’ve already started, but I have yet to write a word about them. But here I am writing about 3% so I can get on to the next episode. I’m pretty stoked to learn more about these characters and this broken society that has been framed so well in episode one. And you know what? This is a fantastic commentary about Brazil. I was even working on a project at work to appeal to the rich of Brazil to help the poor of their own country. Seriously. Was building a website for this express purpose. This is a real issue for Brazil. And to see this play out on the screen as “entertainment” is really quite interesting. Anyway, I’m stoked to see where this show is going. Join me as I continue my progress through each of these episodes. I’ll add links below once the write ups are completed.