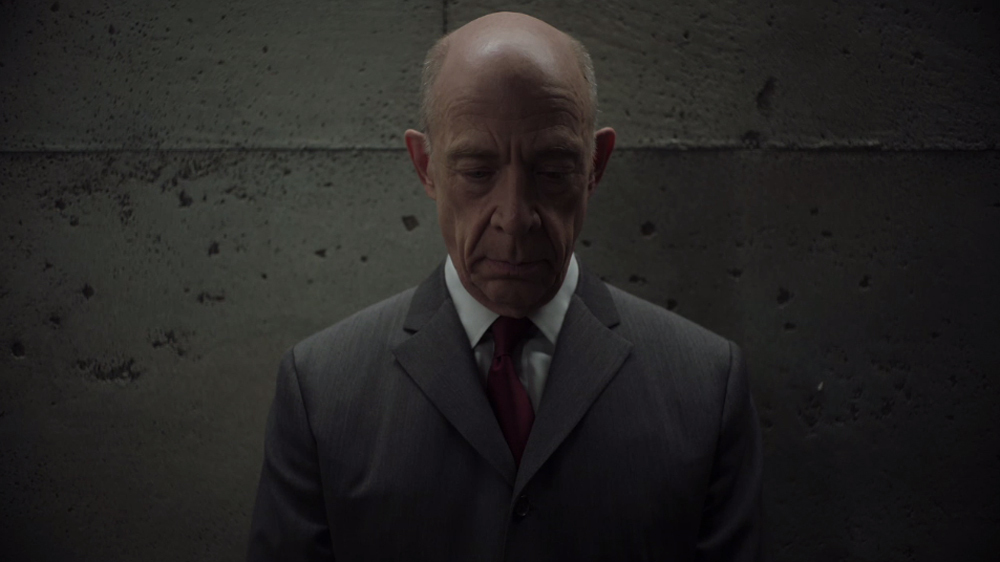 I’ve made it pretty clear from the start, it’s a rare TV show that I watch. My kids (of which I have five now all of a sudden) don’t really even know how normal TV, like you and I know it, works. You know, TV with ads, and an evening line up? Yeah, no. Zero idea. We just don’t ever have the TV on in the house.

But occasionally, you guys will bring me a show and it lights up my cerebral cortex to such a degree, that I can’t not talk about it. Recently the two shows I brought to you were Homecoming and Maniac. But two of my favorite shows of all time that we had fun discussing here were Dark, and Taboo. So, it’s not that I don’t do it, but they are such enormous time investments, and are so hard to do correctly, that I generally just stick to independent mindjob movies…or movies that make you THiNC. But if you’ve been here before, you already know all this, and I’m just preaching to the choir.

Well, the TV show Counterpart is definitely one of those shows. I am not going to do a walk through of the show, I just want you all to be aware of it, and to let you know we can discuss the spoilers of the show in the comments if you want. So, if you guys haven’t seen it yet, just don’t drop down into the comments area, OK? But I will give you all a teaser, telling you what the show is about so you can get a taste for it.

The Idea of Counterpart

The brilliance of this show is in its core idea. Some time ago, there was a rift. Some sort of shift, or break between realities. A portal opens up between two different multiverse versions of our earth. So, on one side, is our earth…with our history and our reality. Cross through that portal, and you find an exact duplicate of everything. But as the portals remain open the histories and the people all begin to diverge and become different. A plague ripples through one side, killing 10 percent of the planet, but doesn’t effect our side. And on top of all that, no one knows that there are two different sides because there is an agency that controls the portal between worlds, and it is committed to keeping the existence of the rift a secret. It is like a spy game TV show set in Berlin back during the Cold War. There is distrust between worlds. And anger.

Where the show gets really intriguing, is that there are two copies of all people on both sides of the portal. So, maybe person A is a concert violinist. But on the other side, she is a contract killer hired to put a hit out on herself. Wait, what? Hahaha. Or maybe, person B on this side is a desk clerk, but on the other side, he’s a high level informant at the UN. And these differences are caused by the divergence between massive choices and events that had taken them in different directions. It really does make for some extraordinarily complex and intriguing plot twists and various intrigues.

The acting is extraordinarily good. I mean, how often do Oscar award winners take on a show like this? J.K. Simmons is fantastic. When I watched this, I attempted to try and decide which Howard Silk I was watching as he came on the screen. Was it from our world? Or was he from the darker, more sinister world? I currently have a running theory that one character (I won’t say which) is something of a mouth breather. While the other isn’t. Heheh… it’s such good acting that the tells are consistent, but difficult to spot. Regardless of my weirdness’s and ticks, the show is an interesting watch just for the acting alone.

Now I have to say, I am assuming that you are here on THiNC. because you enjoy movies and TV shows that will force you to think. And it is with that assumption that I am recommending Counterpart to you. But you literally have to watch, and watch closely. Sometimes it’s unclear who is doing what to whom. Sometimes the show is just opaque as to where it is going. So this is a TV show that is going to keep you on your toes. If that isn’t the kind of show you are up for then take a pass on this one. One last caveat, I haven’t watched season 2, so I can’t vouch for where the story goes, but I can only imagine that the show will get much more convoluted and confusing the deeper the show goes.

Have you guys watched? What are your thoughts on the show?