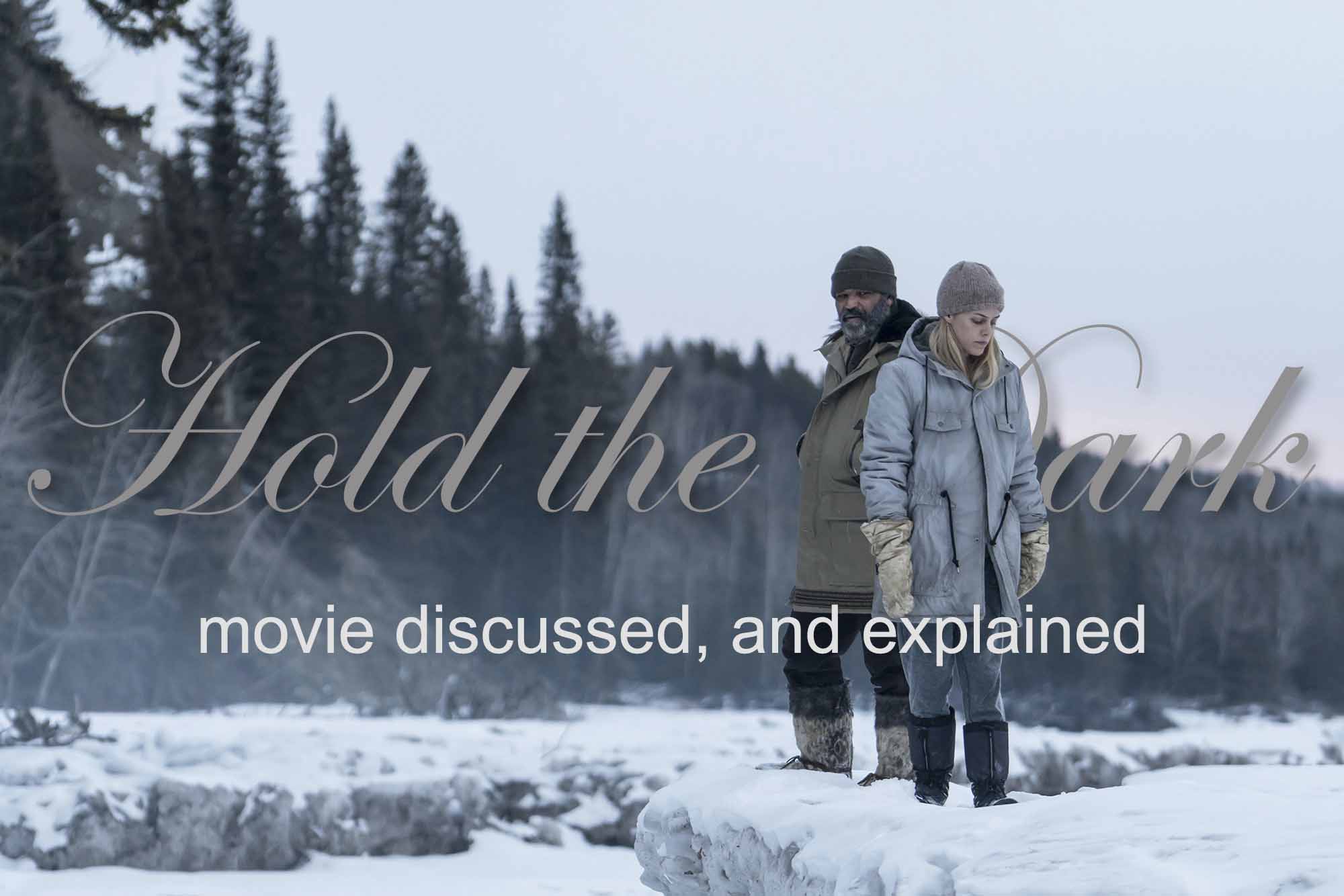 Taylor Holmes
cinema
November 5, 2018
Netflix's Hold the Dark Is a mindjob of a movie that resists all attempts at explanation. But is an amazing ride all the same. IMDB
Screenplay
Action
Mindjobness
Directing
Acting
Reader Rating4 Votes
4.8

Hollywood has a well defined and explicitly formulaic expectation for movies. It goes something like this: conflict defined, hero incapable of overcoming, hero struggles, eventually perseveres of the conflict, party is thrown. Or something like that. Right? It is the standard Rocky movie plot template. Rocky gets beaten. Rocky chases chicken. Rocky overcomes. Netflix’s new movie, Hold the Dark, doesn’t follow that template even a little bit. And the movie is all the better for it.

If you haven’t seen the film, it is a dark, and cold, blustery movie, that dives deep on man’s inhumanity to man. If you really enjoyed No Country for Old Men, then this is right up your alley. Violent. Bloody. And incredibly confusing. It is a slow boil of revelation after revelation. And better yet? The film doesn’t even attempt to explain itself. It might even contract and hide its answers from easy viewing, which means, it may just reward those of us that are determined to push through for an answer. But I’ll be honest, I really still don’t know if we’ll find the answer. At this point in most reviews, I already have a roadmap well in place and ready to go. But with this one? We are going to learn as we go, because yeah…

From here on out, the rest of this review is spoiler infested craziness. Do me a favor and click here to watch the film, and then return if you haven’t had a chance to see it yet.

Hold the Dark is a movie, directed by Jeremy Saulnier, who will be best known for his upcoming work on episodes 1 and 2 of True Detective season three. I promise. It was written by Macon Blair, who most famous for his writing of the amazing screenplay, I Don’t Feel At Home In This World Anymore. And it is based on William Giraldi’s book by the same name. Ok?

Now, I just mentioned two characters, whose actors with pedigrees that are off the charts. Russel Core, played by Jeffrey Wright, of Hunger Games and West World fame. Jeffrey Wright played one of the two critical parts in West World, and cemented his fame in my mind with his role as Bernard. And though I thought it impossible, Medora Slone’s character is played by an even more influential actress. One who has graced THiNC.’s pages over and over and over again. Riley Keough, the granddaughter of Elvis, has blown the doors off the movies, It Comes At Night, Mad Max: Fury Road (one of my favorite movies of the past five years), Welcome the Stranger, The Discovery, and on and on… basically if Riley Keough is in a film, you can all but be sure that it’ll be a hit here on THiNC. Which basically means, we should all set alerts in 2019 for the films The Lodge, and Earthquake Bird. I’ll bet you a Starbucks coffee they will both be amazing.

Anyway, Russell Core agrees to head out into the wild to track the wolves and see if he can get to the bottom of her son’s murder. Did I mention that her husband is in Iraq murdering people left and right, and may not exactly be right in the head? Well, Medora isn’t right either… but I had assumed that was because her son had just been murdered. Oh, how I had assumed incorrectly. But when Core catches up with the wolves he decides not to kill the animals as he is watching them eat one of their own cubs.

When Core makes it back to the small Alaskan village, he finds Medora gone, and her murdered child in the basement of the house. Well, this sets off a massive man(woman) hunt. As Russel asks around and learns that Medora is thought by the town’s people to be a tournaq. That she can slip her own skin and take the form of a wolf. That her blood is cursed. Uh. Ok. When I went digging to find out what a tournaq was, this came up:

Marchosias is a great and mighty Marquis of Hell, commanding thirty legions of demons. In the Ars Goetia, the first book of The Lesser Key of Solomon (17th century), he is depicted as a wolf with gryphon’s wings and a serpent’s tail, spewing fire from his mouth, but at the request of the magician he may take the form of a man.

I clearly underestimated our good Medora Sloan’s abilities. Regardless, the rest of the movie is just an endless pile of death. 100% shocking throughout in that I assumed everyone was a good guy only moments before. Medora makes a run for it, and the cops follow. But following the cops and Russell is Medora’s husband, recently released from Iraq, after a neck injury.

Our first assumption is that Vernon Slone, Medora’s husband (or is he?), is hunting his wife down to avenge his son’s life. And so, as Russell follows her, Vernon is always right behind him throughout. And when the cops follow the wrong lead, Russell and Donald – the local sheriff (played by James Badge Dale) find themselves being hunted by Vernon Slone before he goes after his wife. Well, Donald ends up dead, Russell ends up shot with an arrow, and Vernon and Medora end up happily reunited in the hot springs.

I thought Vernon was chasing Medora down to kill her!? Well, so did I. And that wasn’t his goal apparently. Instead he murdered, killed, impaled, shot, anyone in his paths just to be reunited. I think? And it only gets more weird in that Vernon removes the arrow and lets Russell go. Eh? Russell is found by two local women, and they save his life. Meanwhile, Vernon and Medora dig their buried son out of the snow, and trek off into the great white unknown.

What the Heck Did I Just Watch?

First off, we can ascertain that Medora and Vernon are not Yup’ik locals. So they are transplants of some Nordic variety? Also, we know from interviews with Jeremy Saulnier that he intentionally didn’t explain what happened in the film because it ruined the overall feel of the movie. But, that if we look closely at that first meeting between Russell and Medora, everything we need is right there to explain the overall movie. So, in an effort to chase this particular lead down, I’ve rewatched that section of the movie, and taken random notes regarding interesting tidbits from their conversations. You are welcome:

Medora – “I didn’t think you would come, when I wrote, I was ready to try anything.”

Medora – “So you’ve come to kill it, to kill the one that took him.”

Medora – “You’ve hunted and killed one before, that’s what you wrote. I would’ve killed the thing myself if I could’ve found it.”

While Russell was looking at the wolf mask on the wall, Medora – “Can I ask if you have a child?” He answers that he does.

Medora – “Do you have any idea what’s outside those windows? How black it gets? How it gets in you.”

Russell – “Did you meet your husband in the village?”

Medora – “I never met him, I knew him my whole life, I don’t have any memories he wasn’t in. Then he left me here, with a sick child.

Medora – “What did it feel like to shoot that female wolf?”

Medora – “Because you think it’s the natural order?”

Russell – “The natural order doesn’t warrant revenge. They’re not who you think, Mrs. Slone. What happened here is very rare.

Medora – “There’s a hot springs a few hours walk, north of here. It’s a good place to get clean.”

Alright, not a ton to go on here. But a string to pull on anyway. Let’s see what it gives us. The first red flag is this line, “I never met him. I knew him my whole life.” Well, of course, she knew him her entire life, as she happens to be Vernon’s sister. The child is sickly, a result of their incest.

Would it be an accurate assumption that Vernon and Medora are living as the wolves live? Eating their own sick off-springs. Living in a relationship filled with rage and forbidden love? Have the two of them gone completely feral?

The Two Main Theories of Explanation

In flipping through the cadences of this film, the various drum beats of meaning, it feels as if there are two potential explanations happening here simultaneously. The first is a natural one. Something akin to Seasonal Affective Disorder, or a natural madness caused by the winter’s long hours. Medora was driven mad by the darkness that stood watch outside her home’s windows. Similarly for Vernon. Both have been consumed by the darkness of the terrain and the location. Remember, Hold the Dark is set deep in the Alaskan mountains. So deep, so remote, that Anchorage is considered some place other than Alaska. Medora can’t imagine the beach even.

Better yet, they seem to live their lives within the circle of life of the wolves that circle and prod their town for weaknesses. There seems to be a yin-yang that encircles their community and that of the wilderness. Their wolf masks just indicate the deceptively close proximity they are to being wild themselves… feral. Could it be that all three child killings were a result of this darkness spreading over the entire community? A sign of parents slipping out into this darkness surrounding this enclave?

Yeah, I don’t know if I buy that one either.

The Yup’ik woman told of an evil in Medora’s and Vernon’s eyes. She remembered when the white man brought the influenza (another great evil) and the wolves came, scattering the dead across the country side. Think of the masks that the two wear. They seem almost possessed when wearing them. Could it be that they are opening themselves up to their tournaq counterparts when they do?

Also, remember Medora’s comment about the springs being the only proper way to get cleaned? Seemed more of a ritualistic comment about guilt, sin and regret, than it did about soap, and scrubbing.

The Ending of Hold the Dark Explained

We know that Russell too is susceptible to the Dark… holding the dark. He’s lost his wife. And is separated from his daughter. He seeks out the natural order for clarity and ideas on something real that will matter… something larger than himself. He too was close to flipping over to the darkness. To abandoning the light. But ultimately he comes close to the line, only to be saved by his daughter at his bedside in the hospital.  Possibly the only ray of light in this entire, dark imbued landscape of a movie.