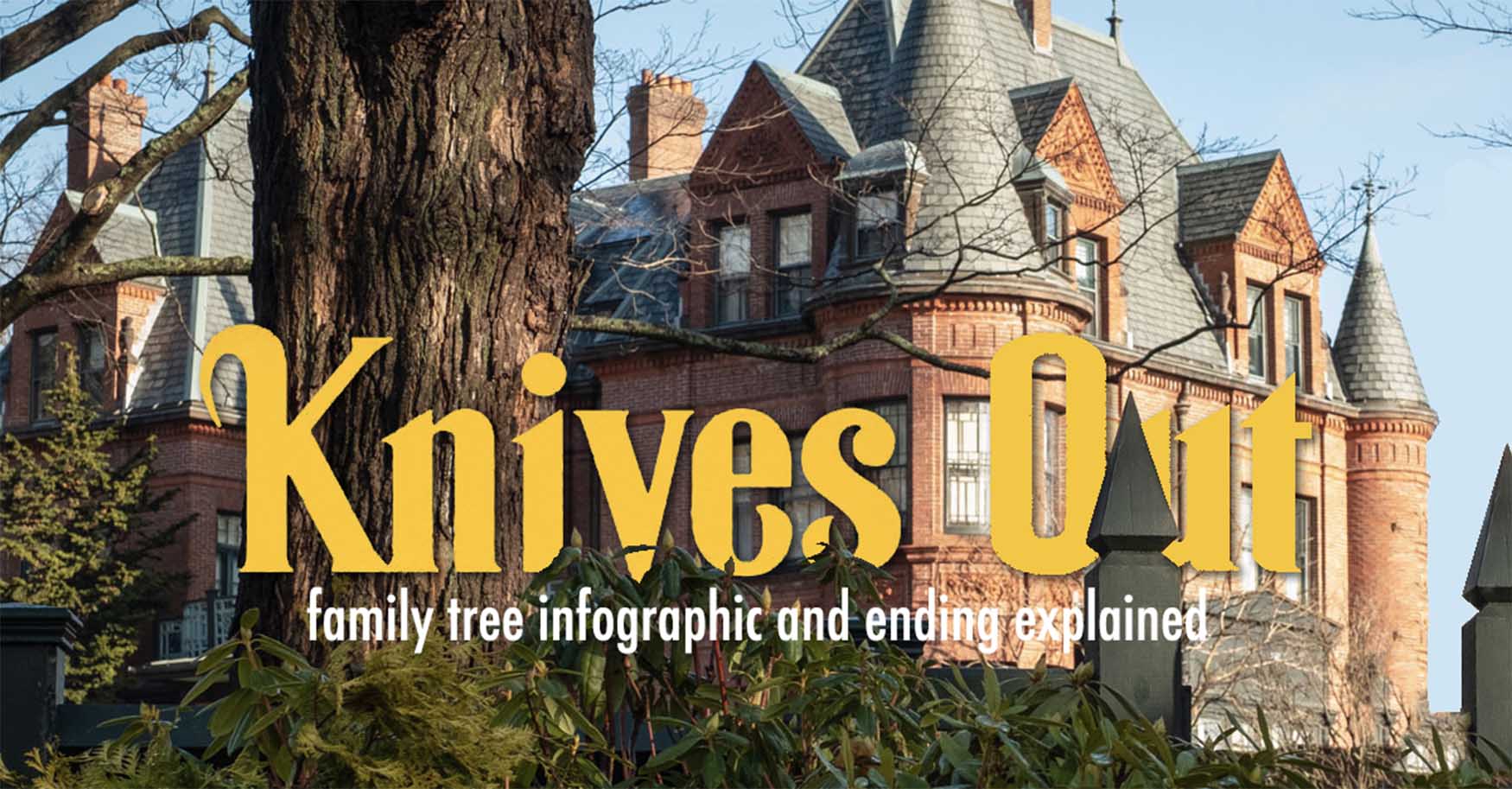 Taylor Holmes
cinema
November 29, 2019
Knives Out is a clever post/postmodern flick that turns everything upside down in the murder mystery world - and all for perfect effect. Good wins, and evil loses. Which, is surprising in this day and age.
Screenplay
Acting
Editing
Cinematography
Mindjobness
Reader Rating2 Votes
4.3

Were you guys confused by Knives Out? Did you just walk out of the theater going – wait, WHAT?!? I know more than one of you are here 100% because of just that reason. But that’s OK because I’ve got you. Don’t worry, we will get you through that ending safely. I promise. That is why I have written this Knives Out Movie Primer & Family Tree walk through. That’s right. Not only am I going to gently, and carefully, walk you through the details of this movie…but I have also created a Knives Out family tree, dangit! I know, I love you too!!

But first, I have a buddy who keeps trying to get me to read Agatha Christie. So we book swap, I give him a book to read, and he gives me an Agatha Christie. Always an Agatha book. Why? Because I can’t figure out why they are so loved and adored. Literally, I don’t get the love that the book reading community pours out for Christie’s books. Heck, I don’t get the whole murder mystery thing, at all. And yet, here I am, with a Knives Out Movie Recommendation? What is wrong with me? (Has my buddy hacked my site and taken over for this post?)

Have you guys heard of Knives Out yet? It’s got a 95% fresh score on RottenTomatoes. 95%?! For both the audience and critics alike? Unbelievable. Knives Out was written by Rian Johnson (whom you know from a ton of big movies, like Brick, Looper, and the Last Jedi) who is paying homage to the aforementioned Agatha Christie. But he turns the mystery genre upside down with this screenplay. How? Well, first of all Johnson cuts against type with the characters (I’m going to talk about this a lot more.) and with the inside out murder plot. And the casting is off the hook here – the star power here has just got to be seen to be believed. We’ll go through all the characters – because the actors and their roles are a huge part of understanding this film. But basically, a Murder Mystery author appears to commit suicide after cutting his three children out of his will. Not so fast, this is a murder mystery film after all. But who killed him? That remains to be seen.

Knives Out is a funny, irreverent, witty, and insightful take on the murder mystery film genre. Rian Johnson has realized a classic retelling of a fairly standard, paint by numbers sort of movie type. But he has done so from the inside out, reinvigorating the genre, while also paying homage to the originals. Or, maybe he is laughing at the genre a little. Knowingly chuckling at himself as he knows, that we know, that he knows, this is a little too crazy for real life. But that is what makes this movie so fun. The tongue in cheek way in which the movie is written. But have you watched it yet? Heck, want to watch it again? Watch it right here:

The Characters of Knives Out

Oh, and by the way, Joseph Gordon Levitt had a cameo as well. JGL has been in pretty much every Rian Johnson movie ever – starting with Brick, so it’s only appropriate that he had a cameo here as well. And, as I usually do, I got a little carried away, and created a Knives Out family tree suspect infographic. Be sure to click it in order to get the full sized image.

Ending of Knives Out Walkthrough

Up until now, this post has been pretty spoiler free. It’s all the set up. It’s been about the family. Yadda Yadda. Nothing really radioactive. But, from here on out, I’m going straight for the jugular. If you want to avoid spoiling this movie (which you really need to avoid doing) go see the movie in the theater today. Or wait to stream it. Whatever. But don’t continue on. Deal? Thanks for that.

Look. There is no way that I am about to walk you through the entirety of this movie. But I will cover the important outline of the things you need to know to understand the ending. First thing you have to know – Harlan went into the evening of his 85th birthday ready to clean house, and “fix” the problems in his family. Walt had been leaching off of him his whole life, and so Harlan fired him as the CEO of his publishing house. Richard Drysdale was having an affair, and Harlan informed him that he would be telling Linda. Joni had been double dipping against her daughters expensive college tuition and was informed that was stopping. Oh, and by the way, the week before the party, he revised his will to give 100% to Marta. Everything. The publishing company, the house, the estate, every dime of his $60 million. So every single member of the family had a reason to kill their father.

But when push came to shove, it was Hugh who swapped Marta’s drug labels in an attempt to have Marta kill Harlan. Sure, there were a lot of details about how he left, how he came back, and how he returned once again. But those are just details. More importantly is that after Hugh swapped the drugs, Marta inadvertently swapped them again, inadvertently giving him the correct dosages of both. But, by THINKING she had incorrectly dosed him, caused Harlan to commit suicide, in order to make it look like he was not killed by Marta. OR, better yet, to make it look like he was murdered well after Marta had left. Harlan was just trying to send the police in a totally different direction than Marta.

Hugh, when he realized after Marta told him the whole story of what had actually happened, tried to pin the murder of Fran by overdosing her at a laundromat. He lured her to the location by giving the toxicology report to Marta that Fran had given him. Thereby insuring that Marta would do whatever she could to get the report and destroy it. But when she did the right and good thing, of calling 911, and performing CPR, she both insured Fran didn’t die, and that she couldn’t get pinned with her murder. But Hugh didn’t know what had happened, and that she had survived.

So when Detective Blanc calls Marta and Hugh in, and informs him of what he knows he has done – Hugh says, ‘So what? I swapped drugs, that got swapped again? That isn’t murder.’ And then when the detective informs him they know about Fran, he basically confesses to overdosing her, and killing her. Which, didn’t happen. And once he realized they had recorded him admitting he attempted to kill Fran, he figures he might as well kill Marta too. But when he pulls the knife from the wall of knives, he pulls the fake one, and doesn’t hurt Marta at all.

As the movie wraps, and Hugh is getting put into the police car, Linda takes a lighter to the blank note that Harlan had given to Linda in order to see the hidden ink. The blank note is the same one that Richard earlier had assumed was just a blank, and so he left it in the envelope. Left it there for Linda to find…and uncover the ink, which told her Richard was having an affair. And as they all stand there, they look up to the balcony, where Marta stands, in her new home…realizing that she has one and they have lost.

But the reason that Marta has one is because she was good. She had tried, throughout the course of the movie, to always do the right thing. And while it is true that Marta had beaten Harlan at Go way more often than even Hugh had, it wasn’t because of her higher intellect that saw her through, but rather, it was because of her kindness to Harlan, and her perpetual good intentions.

Final Thoughts on Knives Out

Rian Johnson has created a post-post-modern murder mystery here with Knives Out. He’s put goodness on a stand, and protected it. And he has taken the evil of absolutely everyone else in this movie and cut them down to size. Marta, though not perfect, was the moral standard in this film. She cared about Harlan, and wanted to do anything for him. But when everything goes wrong, she continues to try to do the right thing. She tried to follow what Harlan wanted her to do. She saves Fran’s life. And she is honest with the detective when push comes to shove.

In a world where truth seems not to matter much anymore, this was a surprisingly good movie. Knives Out pulled this all off with humor and wit. I was quite shocked with just how smart this movie was. The acting in Knives Out was spot on (I mean, how could it not be?) and the editing and direction was brilliant. And while I am not suddenly an Agatha Christie convert, I did enjoy this movie thoroughly, and I can’t recommend it enough.

Where to watch Knives Out