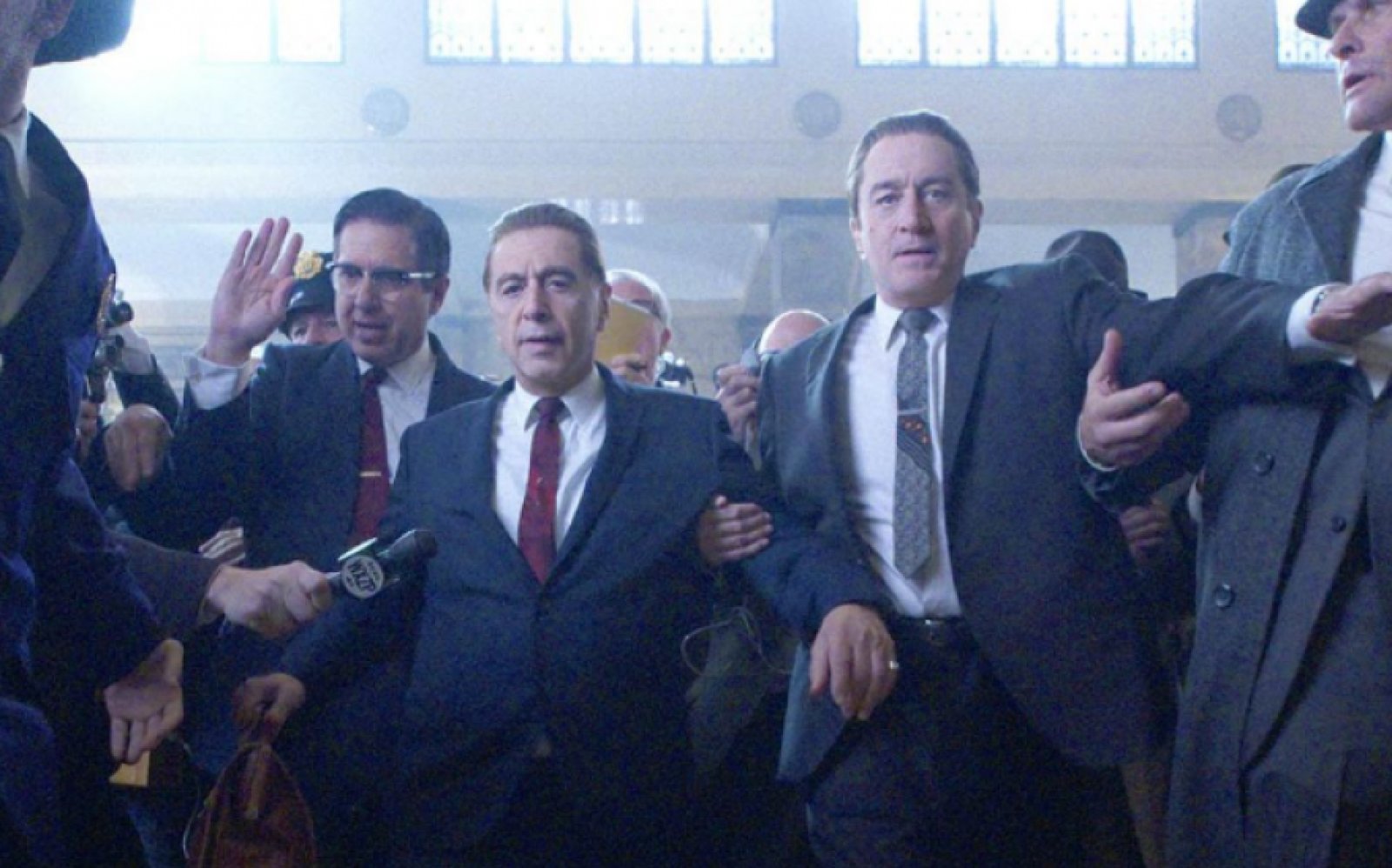 Taylor Holmes
cinema
December 8, 2019
The Irishman Moral Movie Greatness Explained - because something happened in this movie that made this quite possibly the best movie of the year.
Screenplay
Editing
Acting
Action
Direction
Reader Rating5 Votes
4.7

The Irishman Moral Movie Greatness Explained. Most of the time I mention a movie here at THiNC. it’s because I’m dying to bring you a movie you haven’t seen (exemplified best by my top 25 unseen mindjob movies list). Or maybe bring you a movie you don’t grasp fully (like maybe this one, or this one?) – and it might help a few of you. But with the Irishman, I already know I’m like 2 weeks late, and 90% of the population has already streamed it. But there were aspects of this movie that were really fascinating to me, and I just can’t not talk about it. So, instead of a primer-esque walkthrough, and an intimate, detailed overview of the movie, I’ll give you a quick paragraph of what happened, and then I’ll dive straight into the specific things that I found interesting. But mainly I’m mentioning The Irishman so that you can tell me what you think of it. There’s a lot of controversy about this film. Some say it’s extraordinarily boring. Some say it’s the best movie they’ve ever seen. Some say it’s sexist in it’s exclusion of women. Some say it’s not violent enough. So, maybe we can talk this movie through, and in the process we’ll make heads or tails out of it.

If you are one of the four people that haven’t seen this movie yet, here, have a trailer:

Spoiler Dragons Abound From Here On Out:

Martin Scorsese’s, The Irishman, tells the story of Charles Brandt’s 2004 book, ‘I Heard You Paint Houses’. Netflix’s film follows Frank Sheeran (played, devastatingly by De Niro), who was a hitman that was connected to Russell Bufalino (played by Pesci) as well as time working for Jimmy Hoffa (Pacino) who was the head of the Teamsters. But regardless of all that, if you didn’t know anything about this film, I would describe it to you as elderly Goodfellas. Which, unbelievably, isn’t meant as a slight to either The Irishman, or Goodfellas. The Irishman is as if Goodfellas went looking for its soul, and eventually stood there staring blankly into the abyss as they realize it’d been gone way too long for them to ever have a chance of finding it, let alone redeeming it.

And that is the question at hand. That is the reason I’m here today, wondering what it was that I watched when I encountered this film.

My first problem was that I started watching it close to midnight, just assuming I’d watch the first fifteen minutes and shut it off. Now, realize, I get up at 5am come hell or high water each day. And I have literally no idea how to shutdown most nights. Which leaves sleep getting the short shrift. But the other night was even worse. First, how does a movie guy like myself just assume, out of hand, you are going to be bored watching a Martin Scorsese film? Like, how? I don’t KNOW alright! Gah. But I did. And as I rounded third base, and I was heading towards home plate I realized I wasn’t going to be getting but a brief nap that night. And that’s OK, because, wow. What a movie. I think Leonardo DiCaprio said it best when he said:

“It plays like an elegy. It’s a movie about looking upon what you’ve left behind and squaring up with all of it, but for me, what’s more astounding about this film, in my mind, Marty [Scorsese] transcends his own signature genre and creates a film that methodically transforms itself into an exploration of our very own universally shared mortality. The film is absolutely breathtaking.”

The movie was elegiac in its tone and feel. It was like this warning from the dead, to the living…a rebuke from those that know better about the opportunities of life and the devastating effects of a ruined life. The machismo, braggadocio of Scorsese’s earlier movies were only pale reflections of themselves here. Leaving us with something way deeper to think about. Giving us a real question to ask ourselves…whether we are murderers or not, which is, have we really missed the point of this thing called life? No, not life with a lowercase l…shouldn’t it be a capital L? It should be this glorious thing called Life. We should suck the marrow out of it and breathe it in deeply. There should be a deeper purpose and meaning here that justifies the pain and complications of our daily existence. But instead, we find ourselves reflecting back over the course of lives on planet earth and wonder what happened.

The movie starts at the end, and tells us how we got there. Sheeran started out as a WWII vet, and then he quickly moved up the ladder to becoming a Mafia hitman. He moves from Bufalino and the Italian Philadelphia crime family, over to Hoffa and the Teamsters. The Teamsters, were the financial backbone of the Mafia throughout the United States, which funded casinos and golf course expansions, since no one else would touch these institutions.

Ultimately though, Hoffa draws Sheeran in as he is beginning to have difficulties with the US Government and Anthony Provenzano – or “Tony Pro” as he’s called. Worse yet, Sheeran’s daughter, Peggy, and Hoffa, are becoming close. Worse than worse, Peggy hasn’t really connected with Sheeran or any of his mob friends because she knows what they are up to. But Hoff seems like a genuinely good person to her. Soon though, the Kennedy’s go after Hoffa and send him to jail for jury tampering. And while in prison, he spent his time trying to get back in charge of the Teamsters again. Nixon’s eventual pardon allows Hoffa to go free, but it is the growing disrespect of the current Teamster leadership for Hoffa that really puts him in danger. Sheeran does his part to warn him of just how much trouble he is in, but Hoffa pays his close friend no mind. And voila, Sheeran learns that Hoffa’s murder has been signed off on. Worse, Sheeran has been asked to do the hit himself.

Upon Hoffa and Sheeran’s entering the house, Hoffa realizes that no one else is there, and the meeting might be a setup. He turns to caution Sheeran, who then shoots him twice at point-blank range before leaving the gun and the body at the entrance to be cleaned up by someone else. And after Sheeran leaves, two younger gangsters take Hoffa’s body to a crematorium to eliminate all traces of him. Which, answers the longstanding question of what happened to Hoffa.

Sheeran, Russell, Provenzano, and others are eventually convicted on various charges, none of which are related to Hoffa’s murder, and one by one, they begin to die in prison. Sheeran is eventually released and placed in a nursing home. And as the movie powers towards it’s hollow ending, Sheeran tries his best to have peace with his alienated daughters. Peggy though never forgives her father for Hoffa’s disappearance or his life of violence. In an attempt at trying to make amends for his sins of his violent life, Sheeran begins meeting with a priest. But his heart isn’t in it. He feels nothing for the 25 to 30 people that he killed in his lifetime.

Now, think about this for a second. Today, if we come across a psychopath that has murdered 10 people, our newspapers bleed ink for months. Like, we have a run on ink. Books are written. Long reads in GQ and Rolling Stone are crafted. There isn’t, enough, ink. And that’s just 10 people killed. (Forgive the “just” here, I’m on the cusp of a good logical point here. Trust me.) But Sheeran most probably killed 25 to 30 people, not counting the unjust murders he committed during World War II. I guess Sheeran got a book (which is what this movie is based on – it’s entitled, “I Hear You Paint Houses”) and he also got a movie crafted by Martin Scorsese, and it starred Pesci, De Niro, and Pacino. Hrm. That argument just folded like a house of cards. But you get my larger point here, he seems to be cast in our newspapers as a national hero. Even in this movie, he’s treated like a minor deity. The pinnacle of manliness and testosterone. When, in fact, he should be seen as the psychotic murderer that he was. Why is this? What is the difference between a Ted Bundy and a Frank Sheeran? Sure, Bundy was the wrong example. He was the worst of the worst. But both were murderers. Why do we ethically parse these two as different?

It’s because we have a fascination in the zeitgeist of our day with mobsters. We believe that they live and die by a moral code that was beyond reproach. They didn’t snitch. And they didn’t cry about it when their mob justice folded back in on itself. We believe they were gods amongst men. Why? Because of their fearlessness? Because of their ability to live above the law with impunity? (I mean, Al Capone went to jail for tax evasion??) This though is a broken way of thinking. Look at the other side of the coin that Sheeran wrought. Think of the children he left fatherless. Think about the widows he crafted and created over the course of his run. But they deserved it! I hear you yelling at your device. No. And that is where the moral framework hinges in on itself and locks itself into our subconscious. Because the people he was killing morally deserved it, he was above reproach. We see him as society’s moral hitman. We don’t see him as a morally depraved reprobate. Instead we see him as a movie hero. But that is where The Irishman really starts firing on all cylinders.

The Conclusion of The Irishman

As the movie winds down, the movie actually moves into its best section… and where Martin Scorsese really outdoes himself. Why? Because Sheeran begins seeing a Catholic priest assigned to his nursing home. Wait, what? That isn’t how Goodfellas ended. It isn’t how mob movies end. God isn’t just glibly inserted into mob movies. What is happening here?

The priest attempts to pray with Sheeran, and asks if he feels any remorse for what he’s done in his life. But try as Sheeran can, he can’t bring himself to feel anything at all. Nothing. And, here he sits, as the priest leaves Sheeran alone in his room for the Christmas holidays, thinking back on his life. His caretakers don’t recognize his daughters in the photos. Why? Because they never visit. Minor detail, but it’s critical. Sheeran chose a life as a hitman for the mob and it took him out into the moral wasteland. And for some dumb reason he survived against all his enemies. And here he sits, staring at the slightly ajar door, watching as the priest left.

Culturally we are wrong to pedestal these guys. But I get it. They are killing each other. It’s fine…but then why don’t we lift up inner city gangs in a similar way? (Crib-sheet alert: #becauseracism.) But that is why this movie transcends, it looks past the standard tropes, it looks past the machismo and the braggadocio boasting, and shows an empty, and worthless life at the end of the die. Scorsese has flipped the script here – and that is why this stands as one of the best films of the year. And no, I do not want to hear how boring you thought it was. No. Just don’t.