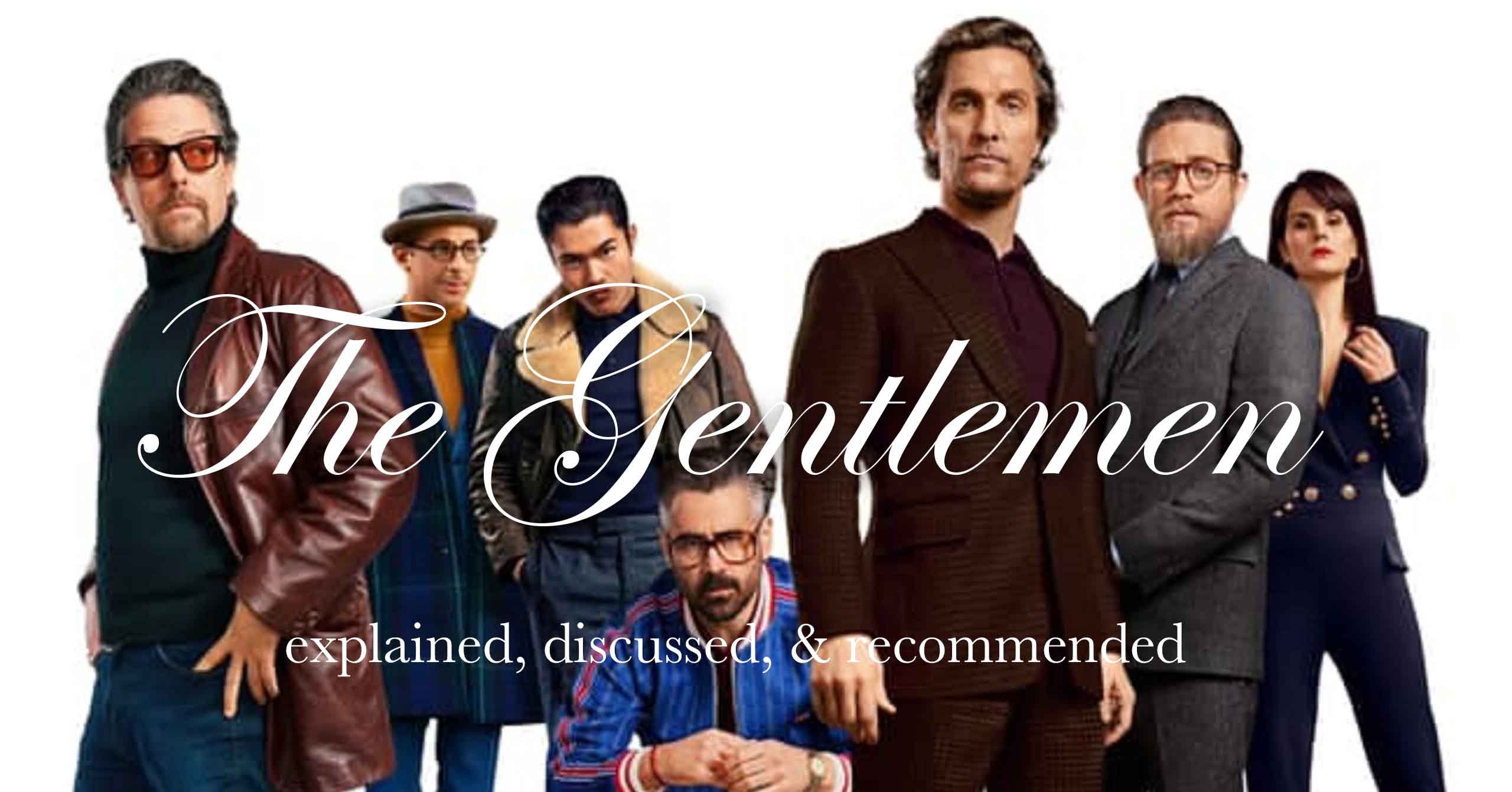 Taylor Holmes
cinema
February 9, 2020
The Gentlemen is a fast talking, crass film, that is violent to its core and yet brilliant throughout. There isn't much about this movie that I didn't enjoy. Kudos to Guy Richie for delivering us another winner.
Screenplay
Dialogue
Action
Acting
Reader Rating0 Votes
4.6

The Gentlemen Film Recommendation Explained. This one is 100% not me. I will not, and can not, take any credit for discovering this particular film. Me? I got in the car, my wife pointed us towards dinner. Then pointed again towards the movie theater. When we walked into the theater, over the door, was the sign that said, “Gentlemen” and it literally meant nothing to me. Zero. Soon though, the credits came on, and name after name paraded in front of my gobsmacked corneas. Matthew McConaughey, (from Serenity) who played the part of Mickey Pearson. Michelle Dockery, (from Downton Abbey) who played the part of Rosalind Pearson. Colin Farrell, (from The Lobster, and Killing of a Sacred Deer) who played the part of Coach. Hugh Grant, (from 4 Weddings and a Funeral and the like) who played the part of Fletcher. Charlie Hunnam, (from King Arthur) who played the part of Ray. And on and on it went. I was literally dumbfounded. Now, credit where credit is due, my wife is a smart one. She’d have to be to put up with my wise-assery. But movies aren’t her strong suit. So for her to pull this one over on me, just blew my mind. Oh, and did I mention the very first name that hit me out of the blue? Guy Richie. You know, of Snatch, and Lock Stock and Two Smoking Barrels fame? Yeah, this was bound to be a fun ride.

Oh, and since then, over on this post, I offered 3 movie reviews to the first three people that would comment… and Angel recommended The Gentlemen as well. So kudos to them as well!! You totally saw this one coming as well. While I was just broadsided by a Mac truck out of nowhere. But apparently, I was the only one in the dark?

But I’m guessing, some of you, might be a little confused as to what might have happened, seeing as though Guy kinda threw the script in the blender before he sent it to the screen. Sort of a Pulp Fiction kind of blendering. But the overarching format is that the movie starts at about the 90% mark of the movie’s action, with Fletcher talking with Raymond, Pearson’s right hand man, for £20 million.

And because the characters in this plot really matter a lot – maybe we should do a high level introduction to each of the most important people so we can keep them all straight as we move along. (I’m already completely lost…so I’m hoping CY, our editor-in-chief here at THiNC., will keep us all straight! hahah.)

Mickey Pearson (Matthew McConaughey) – is Britain’s number one drug dealer of the single best Marijuana on the island. And has enormous volumes available to him because of his hidden grow labs.

Rosalind Pearson (Michelle Dockery) – is Mickey’s wife, who happens to own a high end, and legitimate hardcore garage for the ultra rich and their elite cars.

Matthew Berger (Jeremy Strong) – is an American billionaire, who Mickey is hoping to sell his business to for $400 million, in order to retire with his wife Rosalind.

Coach (Colin Farrell) – is a local boxing coach. A few of the boxer’s at coach’s gym are brought in to attack one of the labs owned by Mickey. Realizing the mistake his guys made, he pleads fealty to Mickey and promises to help him clean up the mess.

Dry Eye (Henry Golding) – is an under study to the Chinese gangster Lord George. Dry Eye is used by Matthew to put the hit out on one of Mickey’s labs in order to drive down the price of his business. But in the process, he decides he’d prefer to buy the lab out from under Matthew.

Big Dave (Eddie Marsan) – the editor and chief of the Daily Print – a British tabloid. He’s the individual who ostensibly kicks all the events of the movie off with his hiring of the private investigator Fletcher.

Fletcher (Hugh Grant) – the PI who is hired by Big Dave to find absolutely everything out about Mickey as he can. And in so doing, decides to allow Mickey to buy out what he knows for £20 million.

With the key characters detailed out (and yes, there are ten more I could talk about, but these are the main players we need to keep in the forefront of our minds.) and squared away, let’s see if we can untangle this tangled Guy Richie mess.

The chronology of the movie all begins with Pearson, who, though born into poverty, won a Rhodes Scholarship to Oxford. There he began selling marijuana to the students. Soon though he dropped out in order to concentrate on his extraordinarily violent business. And, though he has created an elite, and secretive business, with labs the can churn out tons and tons of marijuana, no one can figure out where his fields could possibly be. Happy with what he’s built, he’s ready to try and sell his business and retire.

Then, when Mickey snubs Big Dave, by not shaking his hand in front of a number of important British socialites, Big Dave hires Fletcher to take him down. Fletcher, as I mentioned above is a private investigator, begins digging into Mickey’s every move in order to try and take him down a notch.

In his attempt to sell his business to Matthew Berger, the American multi-billionaire, Mickey takes Matthew to one of the secret locations of his grow-labs. Mickey has leased locations underneath the estates of various British financially troubled aristocracy. Going underground has kept him off the authority’s radar, and propping up the failing estates of the wealthy, has assured discretion. Soon after, Mickey is approached by Dry Eye who offers to buy out the business. Mickey though, dismisses Dry Eye out of hand. And as a result, Dry Eye sends the amateur boxers from Coach’s gym to attack Mickey’s lab. And what we don’t realize until later, is that Dry Eye has been hired by Matthew in order to drive the value of the business down. The boxers release a video of their assault, but soon after Coach tells them to take it down. But the damage is already done.

Initially, Fletcher mainly concentrates on Mickey’s connections to Lord George Pressfield, a royal with a daughter who has gone missing. Mickey sends Ray out to get Pressfield’s heroin addicted daughter back, but in the retrieval process, ends up accidentally killing one of the crew that Pressfield’s daughter is with. Which dramatically messes up the situation for Mickey and Ray and endangers a lot more than just the sale of the business to Matthew. Soon after, Laura, Pressfield’s daughter, dies of a heroin overdose.

Coach, realizing what a deep hole his boxers (and himself) are in, visits Ray and attempts to get out the mess by pledging fealty to Mickey. The first thing Ray has him do is to capture Phuc, one of Dry Eye’s men, the one who had told Coach’s boxers about the lab’s location. (Did I mention that Phuc was killed accidentally in a botched escape attempt? Yeah, lots of people die in this movie. Start getting used to it.) Mickey understands that Lord George is probably involved in the lab hit, so he threatens George and destroys one of his heroin labs in an act of retribution. But Dry Eye actually acted on his own, and is then punished by George for his disobedience. And when George asks his henchman to kill Dry Eye, the henchman kills Lord George instead. The fix was in. (See? Lots of people die.) Dry Eye is feeling empowered, wanting to still take over Mickey’s business, attempts to kidnap Rosalind. Which, if we’ve learned anything at all about Mickey, seems like a fatal miscalculation. Well, Rosalind, not a slouch herself, uses the “paperweight” (small derringer handgun) given to Mickey from Matthew, to fatally shoot two of Dry Eye’s men. But having run out of bullets, finds herself in a desperate situation as Dry Eye attempts to rape her. Arriving just in time, Mickey kills Dry Eye and saves Rosalind.

Mickey then gets Coach’s kids to capture Big Dave, and in an attempt to get him to drop the investigation he has initiated with Fletcher, drugs him, and films him having sex with a pig. And he let’s Dave know, once he’s come to, that he’ll release the video if he doesn’t drop his meddling. And when Mickey meets with Matthew again, Matthew drops the offer for his business to $130 million. Mickey though informs Matthew that he knows what he’s been up to, and brings out Dry Eye’s frozen body, and let’s him know that he isn’t selling the business anymore. Not only that, he wants $270 million in compensation for his meddling in his business, as well as a pound of flesh from his own body for messing with Rosalind. (Think about that for a second…!) To compound Matthew’s problems, he’s been put into a freezer and only has a few minutes to move the money before he freezes to death.

Circling back to Fletcher again – he comes back to Ray one last time with the hope if getting his 20 million quid. It is revealed though that Ray has been tracking Fletcher since their last meeting, and stole the stash of evidence after Ray placed a tracker in his shoe. OK, I gotta admit, I got a bit confused at this point in the movie…so I’m sure you probably got wobbly here too. Fletcher informs Ray that he has sold information to Aslan’s father, a Russian oligarch. Oh, and also a former KGB agent. And if you remember at the beginning of the film, an assassin comes for Mickey, and we presume he died. But it’s later revealed that Ray killed the assassin, not the other way around. Well, Aslan’s father send two hitmen to kill Raymond, and as Coach is leaving, he notices the two entering the property. Mickey is kidnapped and assumes this will be the end. But Coach’s students, wanting to solve the mess they made, ambush and kill the two Russians, and in the havoc, Fletcher runs for it. And afterwards, Fletcher pitches the movie to Miramax. Then Fletcher takes a cab, only to realize that Raymond is driving. And with that, Mickey and Rosalind return back to their Cannabis empire together.

A Few Thoughts on The Gentlemen

PHEW. Dang. Some movies are a lot easier to walk through than others. Obviously, this movie doesn’t hold a candle to a plot that involves time traveling, but only by a bit. Why? Well, because the editing by Paul Machliss (Baby Driver, and Fleabag) basically made it a time traveling movie. Sort of. We start towards the end of the story. We begin with Mickey’s supposed murder, and then flip back to Fletcher, who then flips it further backwards to the beginning of the story. We then perpetually move forwards and backwards as Fletcher starts and stops his story multiple times. It is more orderly than Pulp Fiction, but only in that the jumps have a story telling thread to keep the two chronologies and the relative coherence of the order somewhat intact. But outside of that, is basically one big time traveling fiasco. But ultimately, it ties itself together… (or knots, depending on your comprehension).

I loved it. The best part was that my wife inadvertently threw us into the deep end of this particular pool and I had no idea where we were going. But we both had a blast in the experience. Definitely was a wild ride.