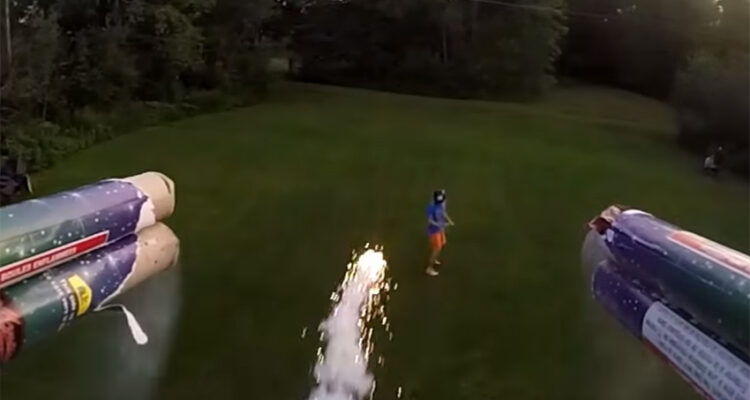 Drone Roman Candle Attack
Oh thank you. Might I please have another? I knew this was eventually bound to happen. This past Christmas pretty much everyone I knew got a drone of some kind or another. Little ones that are smaller than the palm of your hand. And big ones larger than German Shepherd. Drones of all kinds. And its rare that I don’t hear one zipping around the neighborhood on the weekend. They are everywhere.

Yet, militarized drones, I haven’t seen yet. Until now. These guys on this particular day fastened up 4 different roman candles, AND rigged them to ignite after launch no less. But once you have your pimped out drone, um, what are we missing? THAT’S RIGHT – A TARGET. So get your best buddy, strap a go-pro to his face, and have him run like heck. Brilliant. What could go wrong? Hahahah.

So the drone’s aim is neigh on perfect. So your buddy’s hair is singed and he’ll be having nightmares about demon drones in the sky. So he almost lost an eye. So what?! This is internet magic! Hahah.

When I was growing up in Los Angeles, the guys there were pretty crazy with fireworks on the fourth. We’d lock in cars with fireworks in the front and the back of their car, and they’d have to wait until they all burnt out before they could move through. I even got suspended for five days from school later on in life because of my shenanigans. Another story for another day. But the best? The best was when we would have Roman Candle battles. We’d spread out through the street and intentionally try and “tag” the other people before they tagged you. Come on, you wish you’d tried it. Admit it.

But drones plus pyrotechnics? Money. This is the greatest thing! I think I may just personally contact these guys and applaud them and say, “Kings to you Edmond. Kings to you!”