The Autopsy of Jane Doe is Crazy Scary Mindjobness

Taylor Holmes
cinemafeaturedHorrorindependent
July 15, 2018
The Autopsy of Jane Doe is Crazy Scary Mindjobness - or how someone that likes to think when he watches movies ended up here with this scary thing!
Screenplay
Acting
Characters
Mindjobness
Reader Rating1 Vote
3.4

The Autopsy of Jane Doe is Crazy Scary Mindjobness

Let’s just start off with all honesty imaginable. I am a sissy when it comes to horror. Well done horror that is. (And let’s be frank, most horror is really poorly done.) But heck, when you get a good writer and a great idea, oh man. I am a mess. You guys still give me grief about I am the Pretty Thing That Lives in the House, wherein I cried like a little girl for the duration. But I am not your horror warehouse. You don’t come here looking for horror movie recommendations, you come here looking for movies that will challenge you and make you think. You come here looking for movies like The Endless, Sicario: Soldado, Incendies, The Invitation, and the like. But occasionally, you guys convince me that this movie or that movie, with the clever movie title will be a fun night out. Only to find me hiding under my covers for the duration! Hahah.

And that is what happened today with a movie suggestion from Colin. And when I did my research about the movie before I started watching, I only got more excited. Good acting. Good premise. Interesting story. All I was getting was green lights from everyone. I mean, heck, I assumed it was a closed box movie with a father and a son pathologist team charged with finding out what happened to a random woman. Sort of a Top Gun for Pathologists! And dude, how we need that movie to happen. Anyway, it seemed like a super clever way to make a movie. I literally had no idea what I was in for.  (And no, I don’t watch trailers before hand, they give way too much away.)

So, for those of you curious what this pathologists Top Gun movie is all about – this is a straight up and down horror movie. 50% of it is wicked smart autopsy stuff – if horribly gory – the other 50%? Horror to the tilt. I may have piddled myself even. It was crazy. Right, if you haven’t seen it? And horror isn’t your thing. PASS! If you haven’t seen it and low key, non-sexual nudity, isn’t for you? PASS! (The woman being autopsied was naked throughout. But, how sexy is a naked woman lying on a table with her heart out? Right.) The movie has sort of a Se7en vibe going for it. But a closed box Se7en, if you can imagine that. Or maybe Hereditary in a box? Regardless, think scary.

And guys, let’s not make it a thing to make fun of the sissy writer in the comments, ok? Great, thanks for that.

Now, we dive deep into full tilt mindjob of a movie. We are going do our best to describe the chaos from between our fingers. If you are hoping to watch this film, and not have it spoiled, you’ll need to stop now. Because from here on out, here be all kinds of Spoil-Dragons…

The movie opens with a really crazy crime scene. Everyone in the house is dead, in varying degrees of violence. And the entire house is a splatter gore-fest of bone, and imbrued walls. One of the cops comments about the scene, “Actually looks like they were trying to break out…” When they find a woman, half buried and half uncovered in the basement, they transport their Jane Doe over to the small town’s coroner, which is a small, family run operated by Tommy (played by Emile Hirsch) and Tommy’s son, Austin (played by Brian Cox) who is an understudy of sorts.

And when the movie first enters their coroner’s office we get a quick 101 on determining COD, or Cause of Death (Look at me learning how to be a pathologist! Always a good thing to have a secondary career in your back pocket guys!) by simply investigating the things in front of you within the body. We even get a pop quiz with one individual that seemed to have died in a fire, but actually died due to brain trauma. But holy mother of all that is good an holy is it gross. Like crazy levels of physical splatter, and gag inducing bolt cutters to rib cages. I think I just threw up in my mouth. And then when Austin’s girlfriend comes in, she plays the role of complete noob (think us) and asks all the really silly questions. They also use her to introduce us to all of the dead people in the cooler. Because, you know, this won’t be the last we’ll be seeing these guys. (Please, note the bell on the ankle of one of the bodies… I mean, this is a cooked grenade like you’ve never seen before. Of course you are going to hear the tinkling of that bell later on, and it’s going to completely unhinge you. Not me, didn’t scare me in the least. But I’m sure you might be a little frightened by it.)

But when Jane Doe comes in, and the cops are more than a little freaked out about her, things shift away from Coroner-School to fullon CSI mode. Quickly Tommy and Austin start seeing all manner of strangeness with her. About the only weird thing about her from the outside is that her eye are completely grey. They notice that her wrists and ankles are shattered. They notice that her tongue had been severed. Vaginal wall trauma. And quickly they start thinking that she might have been a sex-trafficked woman, killed for what she knew. Everything lines up with that. But they still don’t know the COD (heheh. I’m going to laugh every single time, you know that right?).  But the deeper they go into her body the weirder things get. Charred lungs. She bleeds… corpses aren’t supposed to bleed. And on and on. She is a cornucopia of weirdness the further into her bowels we go. 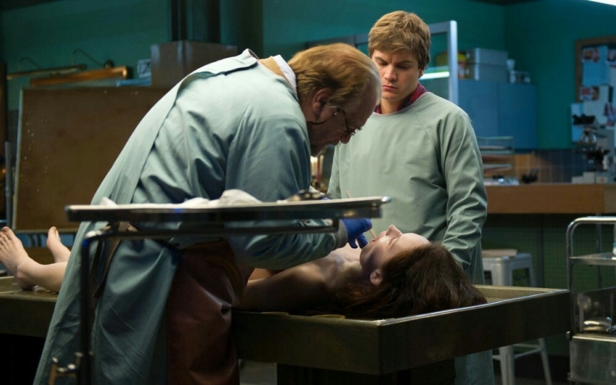 The Autopsy of Jane Doe Goes Upside Down

What I loved about the first half of the movie was just how much it taught me about bodies and learning their cause of death. I was curious. I was invested. I literally expected her boyfriend, or her traffickers to call looking for her body. I expected her to be loaded up with diamonds in her lower intestines. I expected ANYTHING OTHER than what happened next. Yes, I’m slow. But boy did I want it to be more of a standard closed box thriller than a horror movie. So there’s that.

But quickly things start to go bump in the night. We have Austin noticing a guy in a mirror that wasn’t around the corner. We have bumps and noises coming from the vent system. We have an injured cat, that Tommy kills, and then puts in the incinerator. And all the while, they continue to learn more and more strange things about Jane Doe. They find Jimson Weed in her stomach. They find a cloth and runes/glyphs as well as her tooth in her intestines. Then there is that song that keeps tuning into the radio… “Let the Sunshine In”. Yeah, no thanks. I will be ok if I never hear that song… ever, again.

But when Austin and Tommy start pealing back her skin and see all manner of glyphs and writing under her skin, the lights explode and all hell breaks loose. The cadavers are gone. And I wrote this in my notes, “55 minute mark, and I would like very very much fro this movie to be over now.” Hahahah. It’s funny now, but I think I was being just a little serious there! hah.  And that was probably because the tinkling of the bell was now in full swing. And when Tommy and Austin are trapped in the elevator, Tommy uses the axe and hacks away at one of the walking dead, but he quickly finds out that he actually sunk the axe into Austin’s girlfriend’s chest instead.

When the father and the son are still trapped in the elevator, they take a moment out to talk about the mother of the family, that apparently committed suicide. Tommy regrets the fact that he didn’t see her suicide coming. And it’s during this sort of introspective stretch (where I got my much needed reprieve) that they decide if they figure out how Jane Doe died, maybe they can stop her. And quickly, by looking at her brain, they realize that she’s actually still alive, and feeling the pain inflicted upon her.

And then they notice on the cloth that was found in her system, the verse, Leviticus 20:27 – “Now a man or a woman who is a medium or a spiritist shall surely be put to death. They shall be stoned with stones, their bloodguiltiness is upon them.” Austin realizes that the age on the cloth comes from the 1700’s during the Salem Witch trials. And Tommy surmises that the invoked some sort of ritual against an innocent girl, that created this power they didn’t intend. And with that, Jane Doe kills Tommy, but saves Austin. And as Austin is finding his way out of the house, there is his dead father, Austin jumps (as did I… very high) and falls backwards down the stairwell to his death. And when the police come through and investigate this crime scene, I’m sure they recognized the similarities between the two. And so they ship Jane Doe off to another county to be processed elsewhere. 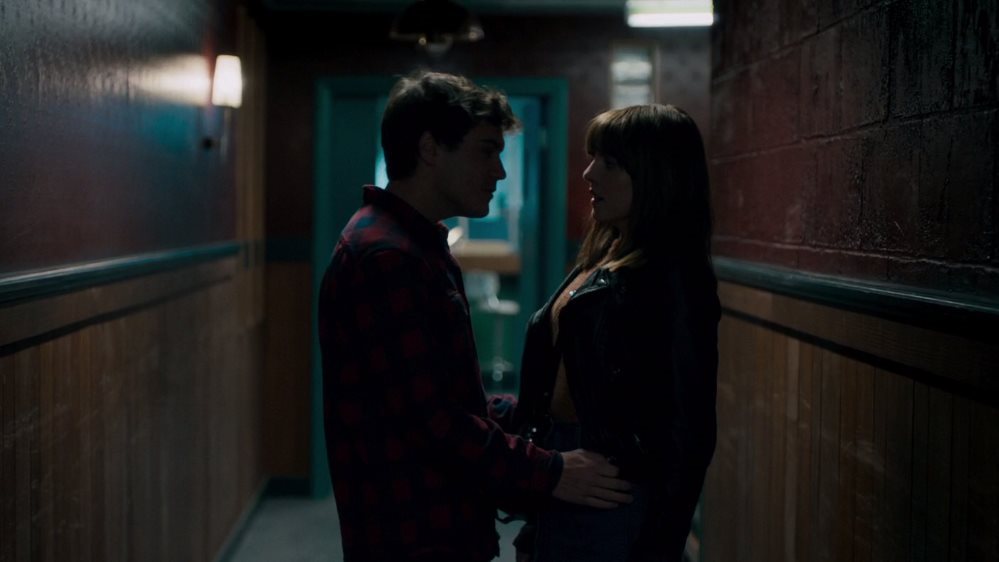 The Timeline of the Autopsy of Jane Doe

Maybe one of the things that might confuse many viewers is how did Jane Doe come to be and how did she end up in that basement? Well, maybe a fictional timeline crafted by me alone, might help explain all of that:

1700’s – innocent is convicted of witchcraft

1800’s – Jane Doe terrorizes communities until she is buried successfully

Does that make a little more sense? I thought about looking up Richard Naing, and Ian Goldberg to see if they’d mind answering a few questions about their movie, and where the ideas came from etc. But then I realized I’d probably have to be brutally honest and tell them it scared me to death and I hated it (though, in a good way.) And decided better of it. Anyway, what did you guys think of the movie? Was I the only one to be scared to death? Gah.

Personally though? I’d have liked this way way more if they had continued on the path they were on, and avoided the supernatural horror aspects of the path they chose to take. There were a million ways to make this movie more interesting. I listed a couple earlier. Diamonds in her belly. Whatever. And then a run in with bad guys? Similar to Freefire, or maybe go a different route like 10×10? Not that they should mimic another movie. But there are plenty of ways to keep this on our particular astral plane. But maybe that’s just me.