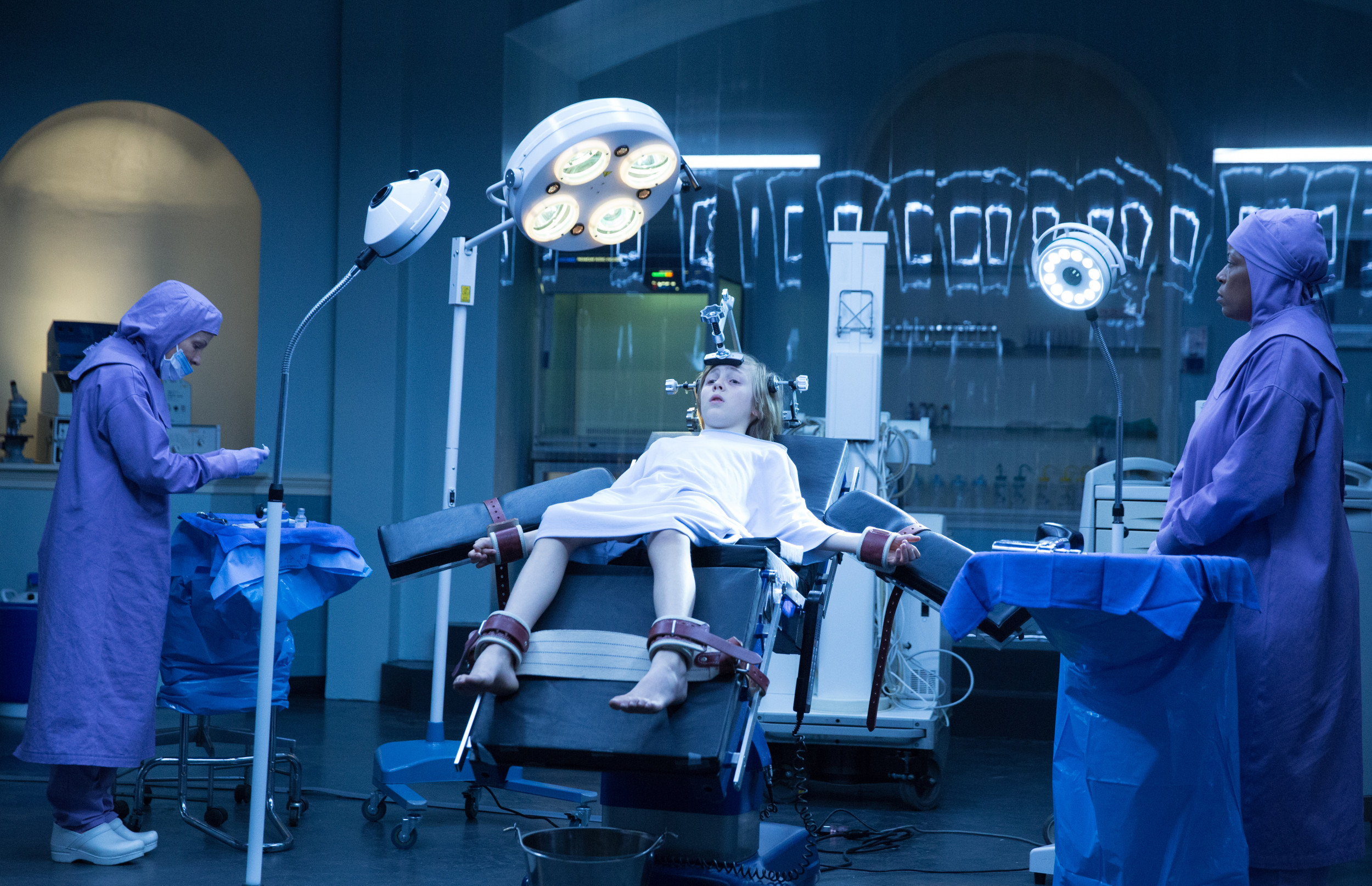 I Just Finished Netflix’s Eli and What Did I Just Watch?

Taylor Holmes
cinema
October 25, 2019
I Just Finished Netflix's Eli and What Did I Just Watch? Because I think the final zig might have snapped the screenwriters' collective necks.
Screenplay
Scares
Acting
Direction
Reader Rating2 Votes
2

But for those of you who haven’t seen the movie yet – you can watch it right here on Netflix. Be clear though, this isn’t a movie for the average Joe. I won’t be stopping people on the street to say – “DUDE? Have you seen Eli yet? You HAVE to see Eli.” (Though I have mentioned Zombieland Double Tap three times today alone.) The first half of this movie runs like a thriller procedural. Maybe it’s a Fractured, or a Elizabeth Harvest, or maybe it’s a What Happened to Monday. But then, this sucker swings the bus for a full 180 and doubles back on itself only to go in the opposite direction. (Yes, I could give you 3 other movies like it – but you haven’t seen it yet, and they would all be über spoilers.) If you’d like to read this review without watching the movie – which goes against my normal principals – fine, go ahead. Here’s a trailer to get you up to speed somewhat on the chaos.

Spoiler Dragons Abound From Here On Out…actually – I don’t care. Let me spoil away would you? Thanks for that.

Eli, (played by Charlie Shotwell and decidedly the best actor in this film) is sick. At least he thinks so anyway. Unfiltered air seems to make Eli extraordinarily sick. So Eli’s parents are taking him to an elite autoimmune syndrome clinic. And Dr. Horn (oh, come on!), played by Lili Taylor, has a patent pending three step process to heal the boy. But no, let’s just jump right to it…’cause Eli isn’t sick. The clinic is actually an undercover convent. The doctor is actually a nun. And her efforts are simply used to rid the children of their evil.

You see, Eli’s mother so desperately wanted to have children that after her prayers went unanswered she began praying to Satan. And as luck would have it! Satan answered. (A much better spin on this same idea is without a doubt A Dark Song.) Only problem is, Eli is a spawn of Satan. He’s evil. And he needs to be cured. Thus the nuns and the undercover convent.

But why would Eli’s father – who is apparently possessed, or some sort of emissary of Satan’s – be working to actively bring Eli to the nuns? Well, apparently Satan sees the nuns as some sort of test to strengthen the children? Or something. That bit is a decidedly weak flow of logic. But whatever. Rose, Eli’s mother, has been lying to Eli in order to help save him from his dark background. But Eli’s father has been lying to Eli’s mother. And Dr. Horn has been lying to them all, because most children that come in, end up being sacrificed in order to save them eternally. Or something.

Which brings us to Haley (played by Sadie Sink – you know her from Stranger Things), the girl that is constantly hanging around the convent, conveniently ready to lend a listening ear whenever Eli needs it. She turns out to also be a spawn of Satan, only she has graduated from the testing, and is there, ready to bring Eli to Satan once the “challenge” is over.

A Few Thoughts About Eli

Let me get this straight…a woman can’t have a child. She invokes Satan, and Satan delivers a husband, a minion(?) to help bring this about. She becomes pregnant, but realizes something is wrong, when the baby comes out hovering? What? Regardless, something tells her this kid isn’t normal.

So immediately, she reaches out to the “church” – and Dr. Horn has ideas. Those ideas consist of injecting the kid with Holy Water, etc. to suppress this innate evil. But doing this causes Eli to be “sick” because he is strong, and is fighting this push by his parents and Dr. Horn? Meanwhile, his real father allows this to happen because it will make him stronger…if he survives?? Am I getting this?

OK, so there is a flaw in this story that the writers; David Chirchirillo, Ian Goldberg, and Richard Naing, have delivered us. I do have to give props to Ian Goldberg for his work on the film The Autopsy of Jane Doe, which was a walk down this similar path, but a much better experience. But there was some interesting details in the art design, set design that makes me doubt the story that we are supposed to be swallowing. Let me just show you, instead of tell you:

See that symbol on the cover for the well? That is a pentagram, with three crosses added. That is no symbol that any church I know of uses. So I’m guessing that this was created by the film’s art direction. But it seems to be indicating something the film makers aren’t necessarily intending. Or are they? Six is never a number that the Church uses, except in the connotation of evil. Three crosses and three points of a pentagram talk to an equal battle between the forces of good and evil. 3v3. And that is not a Christian perspective, at all. Equal forces of good battling an equal force of evil is more of a Taoist perspective. You know, Yin and Yang, and evil being the definition of being out of balance. Which may seem, to the unschooled, the same perspective, but you couldn’t be further from the truth. For example, there is no salvific idea in Taoism – just the idea of balance.

But there are theological flaws in the writing that tells me these guys have no idea what they are doing…OR, SOMETHING ELSE is going on here. The biggest screenplay “flaw” is the fact that Dr. Horn (Wait, seriously, I’m supposed to believe that a nun is going to go by the name of Dr. Horn?? I’m sorry.) believes that if the “treatment” doesn’t work, then sacrificing Eli is the only way to save his soul? That isn’t a thing anywhere within the annals of Christianity, let alone the Bible. “But Abraham’s intended sacrificing of Isaac man!” That was a discussion about obedience and trust. If Abraham had sacrificed Isaac, Isaac would have gone to heaven not because of the sacrifice but in spite of it. He already believed. Yes? Stabbing him with a dagger isn’t going to help him believe in God anymore than he did moments before. (If anything it would detract from that belief I would think! hahah.) Eli though, obviously doesn’t believe – which is why his mother brought him here! So how exactly would sacrificing Eli save him spiritually? It wouldn’t.

But Maybe Something Else Is Going On Here?

Yes, this is just a thriller, looking for a clever twist. And yes, I have already gone on too long discussing some screenplay writer’s inconsistencies theologically with the Church. And no, they don’t care enough to be consistent. But what if they were actually consistent? What if they actually had it sorted this all out and did this intentionally? How could it work?

No. Yes, I could give you the evil minions fighting evil minions theory. Or maybe the Dr. Horn is actually Satan theory. Or maybe, possibly, it could be that it’s the mother, who is the hellspawn attempting at redemption by sacrificing her own child on the altar of the Satan.

Yeah, I don’t know what I’m saying anymore. I’m done rationalizing this movie. Basically, what I think happened, was that the writers in the writing room were like – clones? The hospital is filled with clones of Eli once they get there? And someone else says, no, no we can’t do that, that’s been done before. Alright, I got it, I got it – the hospital is stealing organs without the parent’s permission?!? Nope, done before. AH! How about Eli is actually a ROBOT?!??! Done. The Nuns were wronged by Eli’s family and so they keep them trapped in order to get a confession??!? Yeah, done. OK, what about a pedophile ring, and we are using Eli to trap the pedophiles? Not. A. Single. Unique. Idea! It’s been done! And then they all said, collectively…”THE CHURCH! We’ll blame the church! But this time, it’ll be A Dark Song spin off. And no one will see it coming!” And that my friends, is just a clever attempt to hand you a pile of movies better than this one. Hopefully it worked!