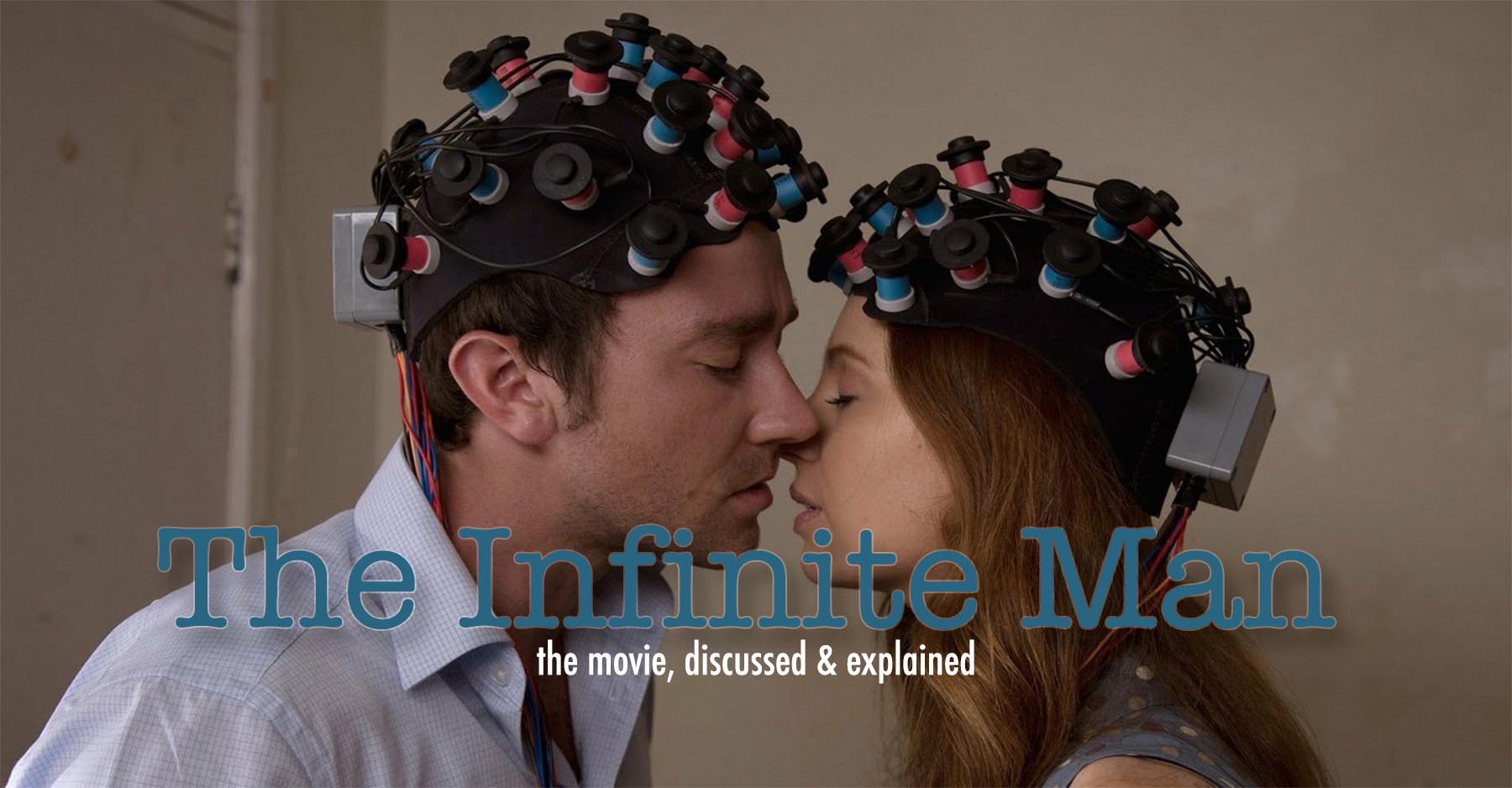 I love me some closed box indie film goodness. And I especially love me some closed box indie film goodness when the film in question also happens to be a time travel movie! Woot! And today, with Infinite Man we will have some really great time walking this movie through from beginning to end. I personally was outlining and diagramming at the midway point of the film just to keep up. Alright, so let’s get to it shall we – “Closed Box Time Travel Film The Infinite Man Explained!!”

Now, if you haven’t seen it…please, please, for the love of all that is good and holy…don’t continue reading! First, it will not make any sense at all. Second…it might not even make sense after having watched the film. If you’d like to watch the film, I think you can watch it free over on Tubi. Or a buck or two on Amazon Prime.

Now, for today’s detailed walkthrough – I’m just going to dump my notes right here. Literally, just one big cut and paste. And, to be clear, this is just a single watch’s worth of notes. I think to really do this movie justice, it’d take two more watches to really get it down. But it is what it is… I got place to go and people to see. But I really did enjoy trying to keep up with this movie as it unfolded.

Loop 1 – The movie opens with Dean1 and Lana1 attempting to recreate their anniversary from a year ago. But it goes 100% all wrong. In fact, the motel has gone bankrupt even. And Lana1, instead, decides she wants to go to the beach. But then Dean1 is able to convince Lana1 to have dinner together. But then, Terry1 arrives, and Dean1, being jealous, sends the two of them off together. Then, Dean1, spends the next year, working, and building. And on the anniversary of their anniversary, Dean1 calls Lana1 and asks her to come back. She does, and the duo are transported back in time to the previous anniversary.

Loop 2 – “This is the past!” – when Dean2 and Lana2 arrive in the past, we notice that there are now two couples. Dean1 & 2, and Lana1 & 2. The two couples then accidentally switch counterparts, with Dean1 finding Lana2, and Lana1 finding Dean2. Dean2 attempts to play music for Lana1, he realizes that Dean1 has the instruments, and the traditional garb. Eventually, the couples trade counterparts again, only to find that Lana2 is upset with Dean2, because he was about to have sex with Lana1!

About that time, Terry1 arrives again – “The Vessel for Honorable Use.” Hahahah. Which made me laugh and laugh. You are welcome for that bit o’ commentary. Well, we watch as Terry1 cattle prods Dean1 all over again. And Dean2 is too jealous of Terry1 to have sex with Lana2. Dean2 then is chucked off the balcony by Terry1. And Dean1 tells Lana1 to leave with Terry1, and to never return again. Dean2, hoping to find Lana2 again, knocks on the door, but bumps into Dean3. And it is then that Dean3 tells Dean2 that he’ll just need to wait a year. Sure enough, Dean2 tries a number of times to break through and get to Lana2, but Dean3 has the benefit of knowing exactly what he’ll try next. What’s worse? It really sounds like Dean3 and Lana2 are having the time of their lives. And Dean2 is apoplectic he’s so frustrated. But after a year, he travels back in time and Dean2 becomes Dean3.

Loop 3 – Dean4 watches as Dean1 and Lana1 watch as Terry1 arrives. But while watching, Terry2(!) arrives. “I’m from the future.” But almost immediately, Terry1 impales his second self with his javelin. Terry1, “This can’t be good.”

When Dean4 is asked by Lana1 to just leave here, to put this all behind them and to just go to the beach…he is very touched by this and decides this is what he ought to do. But then Dean4 sees Lana2 in the window gesticulating at him to stop.

When Dean4 explains he wasn’t aware who was who, he also tells Lana2 that there was a second Terry that came back only to be killed by the prior Terry. “We should tell Terry that his double is dead.” “No, he already knows, he did it himself. It’s Greek theater, Greek tragedy!” which leaves Lana2 and Dean4 together as Dean3 watches on jealously. “I did nothing but watch us for an entire year.”

As the year ticks by, there is one really enlightening conversation:

“Do you remember everything about our first date.

“I recorded it. Later I spliced in a few gags.”

“I don’t want to say you are living in the past – but you are feeling disconnected.”

“I used to think we were happy, when I was watching… “

“We are happy. Why do you hate yourself so much?”

“Tomorrow everyone travels back. And then we are alone.”

But everything goes all awry when Lana2 doesn’t arrive as planned. So Dean4 convinces Lana3 that she needs to go down there and act like she is Lana2. And Dean gives her an earpiece in order to help her say what Lana2 originally said, assuming that Lana2 would arrive soon enough, and that she’d travel back in time soon enough. “But how will I know which one is you??” “Just listen to your heart…and your earpiece!” hahah.

And as a result, Dean4, has a Cyrano de Bergerac encounter with another version of himself. Which, had me in stitches. But the de Bergerac is outdone only a little while later. Just wait. But when it’s time to go back in time, Lana3 has her earpiece overridden by loud music by Dean3. So, Lana3 heads back in time as Lana2. (At this point, my numbering scheme just isn’t clever enough to keep up with this movie. It just isn’t. I need like a Lana2A and Lana2B, or something.)

And there is Dean4, standing in the road, wondering what the heck just happened. But, out of the blue, arrives Terry3. Or a second Terry1 anyway. However you would count that. Apparently, Terry1 suffocated Terry2 in the sports bag and buried him out in the desert. And out of the goodness of Dean4’s heart, he helps Terry3 go backwards in time. And immediately after, Dean4 goes back in time.

Dean5 watches as Terry1 carries dead Terry2 out in a sports bag…again. Then Dean5 packs up his stuff, then watches, again, as Dean1 tells Lana1 to leave with Terry1. But Dean5 runs off, and catches up with Terry1’s car, which has run out of gas. And it’s there that Dean5 convinces Lana1 to head off to the beach with him.

After a year at the beach, Lana1 tells him to stop trying to make everything perfect, to stop trying to please her, when he gets a phone call. The phone call is from Dean1 attempting to get Lana1 to come back to the hotel and jump backwards in time. But Dean5 decides he has to close the loop and fix things. But Lana1 tries to convince Dean5 that she is right here… there is nothing over there. “But you might be there too.”

And when Dean5 arrives back at the hotel, Dean5 has the conversation with Lana2 via an earpiece and with Dean2 (or 3, this is really getting complicated.) But this time, both Deans are in on the manipulation. And eventually Lana2 just tells Dean5 that he has lost her. She bails out, being completely done with the chaos of this insanity.

Lana4 arrives from the beach and connects with Dean2? I really don’t know anymore. But meanwhile, Dean5 and Lana2 are deciding it won’t work. Dean admits that it was all his fault, that if he’d been smart, he would have just tried some flowers and some chocolates. But that he was just going through some stuff, and then he would look her up if he’s able to get better. And as she is walking out into the desert, Dean6 arrives from the future with chocolates and flowers, and the two walk and talk off into the sunset.

But What Does IT MEAN?!?

Well, there is a distinct possibility that it means absolutely nothing. It’s just a farce of a time travel plot to laugh at all the other time travel movies out there that take themselves too seriously. Doubtful. But it is a possibility.

There were several interesting, and recurringly poignant themes that sort of reverberated throughout this wickedly clever movie. Dean (literally all of them) has a serious, serious, serious problem with control. When Lana and Dean happened to have a passably good anniversary at this remote location, Dean plotted and schemed the perfect repeat experience. Lana, on the other hand, just wanted to spend their anniversary on the beach. But we also know that Dean obsessed with trying to make their first date perfect by editing a recording of the experience. He added jokes, fake laughter from Lana, and worked hard to “perfect” his memory of the moment. Dean has a serious problem with control. And after their repeat anniversary went in the toilet, he stayed there, an entire year, building out his time machine, that would allow him to “fix” the previous celebratory mistakes. And worse, Dean had more than one opportunity (dozens?) to cut and run with Lana to the beach. He even made it there with her for a year, and still! And STILL, when the phone call comes from another Dean, he leaves Lana there on the beach.

It shouldn’t be lost on you, that the Dean we follow through to the end is left swinging at the end. He watches as various versions of Lana get snatched up, and he is left alone. Heck, remember when Dean2 is left to wait, and watch Dean3 spend an entire year with Lana? Dean2 is certain he will finally be happy once he becomes Dean3. CERTAIN. But when he becomes Dean3, he is anything but happy. And yet, Lana was happy. She said as much. All Dean3 can think about is vanquishing the other Deans and Lanas. That and finally perfecting that one moment…that perfect, tantric, exultant, moment.

Dean is all of us…sometimes. We are always wanting that über green grass on the other side of the fence. The only thing different about Dean is that he actually had the means to go back in time, to “fix” his mistakes in his past. But why don’t we appreciate what it is that we have? Are we too busy staring at other’s social media feeds? Or, imagining what success actually looks like? Man, I love Dean and despise him simultaneously. You know?

Anyway, this was such a fantastic little movie. What did you think of it?

If you are looking for other brilliant movies like this one – I got you. I should have a doctorate in movies like this one. Time Lapse. The One I Love. About Time. 41. Russian Doll. ARQ. Synchronicity. Coherence. Safety Not Guaranteed. Time Crimes. Primer…etc., etc., etc.