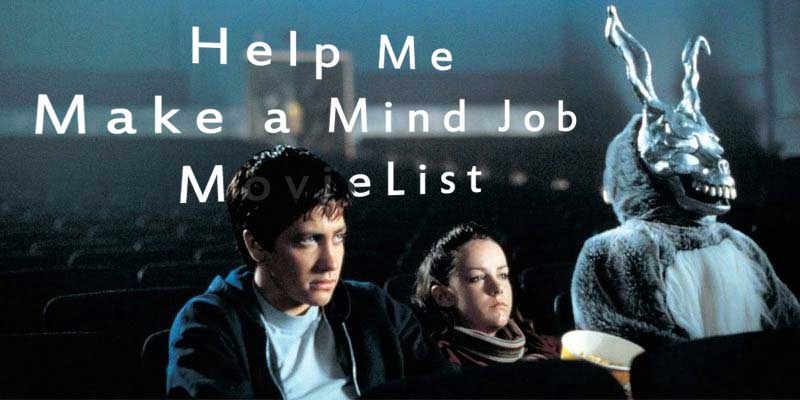 So I was emailing with someone (one of you fantastic readers) just the other day, and in my trying to find a movie for them I ran across my old old post of the 5 best Mind Job movies. Which is a dang good list of movies I might add. But, it’s quickly going out of date. Someone even started arguing with me in the comments years later… WHAT?!? EX MACHINA ISNT IN THIS LIST!??! I was like, dude, I didn’t have a time traveling machine. I didn’t know it was coming!

So, here’s what I want to do. I’m just going to explode a list of mind job movies that I think should be considered for the new list. The parameters for the list? Nothing. If you want to submit a cave painting, I’ll take it. But generally the movie needs to make you say, “WHAT THE HECK JUST HAPPENED!” in all caps like that. I’ve dumped in over 50 just to get your brain started. Some of them I have reviewed and discussed with you. Some you guys recommended to me and I haven’t even seen yet. But it’s just meant as list to get your brain started:

If you want to play – and tell us what you think – here’s what I ask. Please give me your top ten, and give them to me in some sort of order of priority. Maybe I’ll even create an announcement on the site to tell people from other pages to get over here and to help. Never done that before. But hey, we can give it a go and see what happens.

Thanks everyone in advance for helping!! I mean, heck, I can make a list that’s as good as the next guy’s. But it’d be a killer list if you guys helped me build it.