Who Knew Mario Was The Saddest Thing Ever?

So I was flipping through Reddit when I tripped upon possibly the saddest thing I’ve ever seen. Now I don’t know about you but I grew up playing Super Mario Bros. – like all the time. Even though I never owned it personally. And until today, I would have told you that Mario is the Disney equivalent for video games. Pure bliss, light and life. Mario hunts downcast Bowser and gets his princess back. The music is decidedly the happiest music possible for humans to create. It is all but Elfin in its happiness. Right?

No idea what I’m talking about? Here… Listen the music yourself and tell me this isn’t the epitome of all things light and beautiful… (please, if you disagree, just close your laptop, and slowly back away from my site. k?)

There you have it. Goodness and light in a bottle. Which brings us to the saddest thing of all time. Remember? Oh yeah. I was gleefully tripping through Reddit yesterday, when I came upon this random post that poleaxed me out of nowhere. 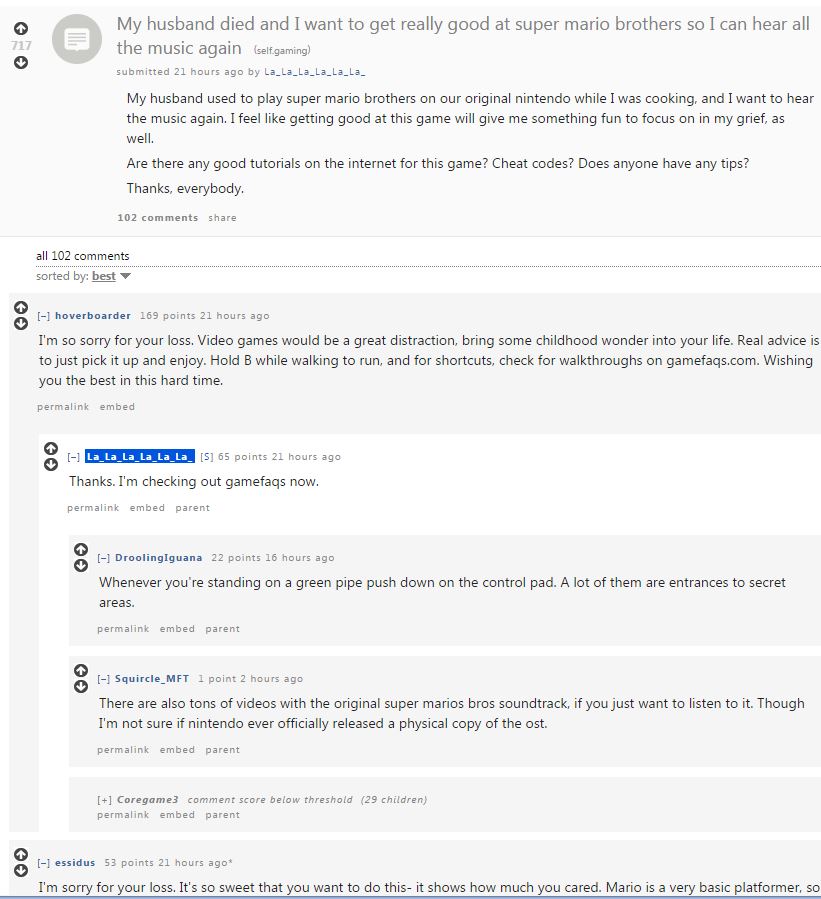 Saddest thing ever. So this woman is coming to the Redditor geeks and asking for help on learning how to play the game – SO THAT SHE CAN HERE THE MUSIC AGAIN. Sure, of course there are other ways to do this. For one, you can listen to the video above. For two, there are full soundtracks of the Mario game music that you can just buy. But this woman wants to learn to play so that she can beat the game, so that she can be close to her dead husband.

Which, kinda reminds me of the story of the young man that found an old saved game of his fathers…

i couldnt touch that console for 10 years.

but once i did, i noticed something.

we used to play a racing game, Rally Sports Challenge. actually pretty awesome for the time it came.

and once i started meddling around… i found a GHOST.

you know, when a time race happens, that the fastest lap so far gets recorded as a ghost driver? yep, you guessed it – his ghost still rolls around the track today.

and so i played and played, and played, untill i was almost able to beat the ghost. until one day i got ahead of it, i surpassed it, and…

i stopped right in front of the finish line, just to ensure i wouldnt delete it.

Which brings me back to this woman, struggling with her own loss and grief, and reaching out for help on how to beat a game, which will help her feel closure, or closeness anyway, with her husband.

Life is short. Life is so very short. I’m midlife, heck. Beyond midlife. (I’ve discussed this at length before, even though I can’t find the link to link you too it… yes, I’m feeling lazy right now.) And you know what? Even if you are young… really young. Listen to me… LIFE IS BUT A WHISPER. Your story may not be this woman’s husband’s… but it doesn’t matter. Even a 100 years is but a whisp and then it’s gone.

Reminds me of Solomon – (that dude was seriously morose) who calls everyone out (especially himself) for wasting life. If he lived today I’m sure he’d be like… all of this stuff we do to fill our life is just wasting it. Stop wasting it. Use it for something good. Love God. Chase after Him. Help the widow, the orphan, the poor.

This story, when I first saw it, blew me up. Like, snorting, eyes running, crazy side kinda blew me up. Because I get it. That game was my youth. And it speaks of lost years. It speaks of youth to me. And to her, it speaks of lost loves. And broken hearts. Life really is very short. And sad. Please, hear me on this. Stop wasting your life and do something good with it.