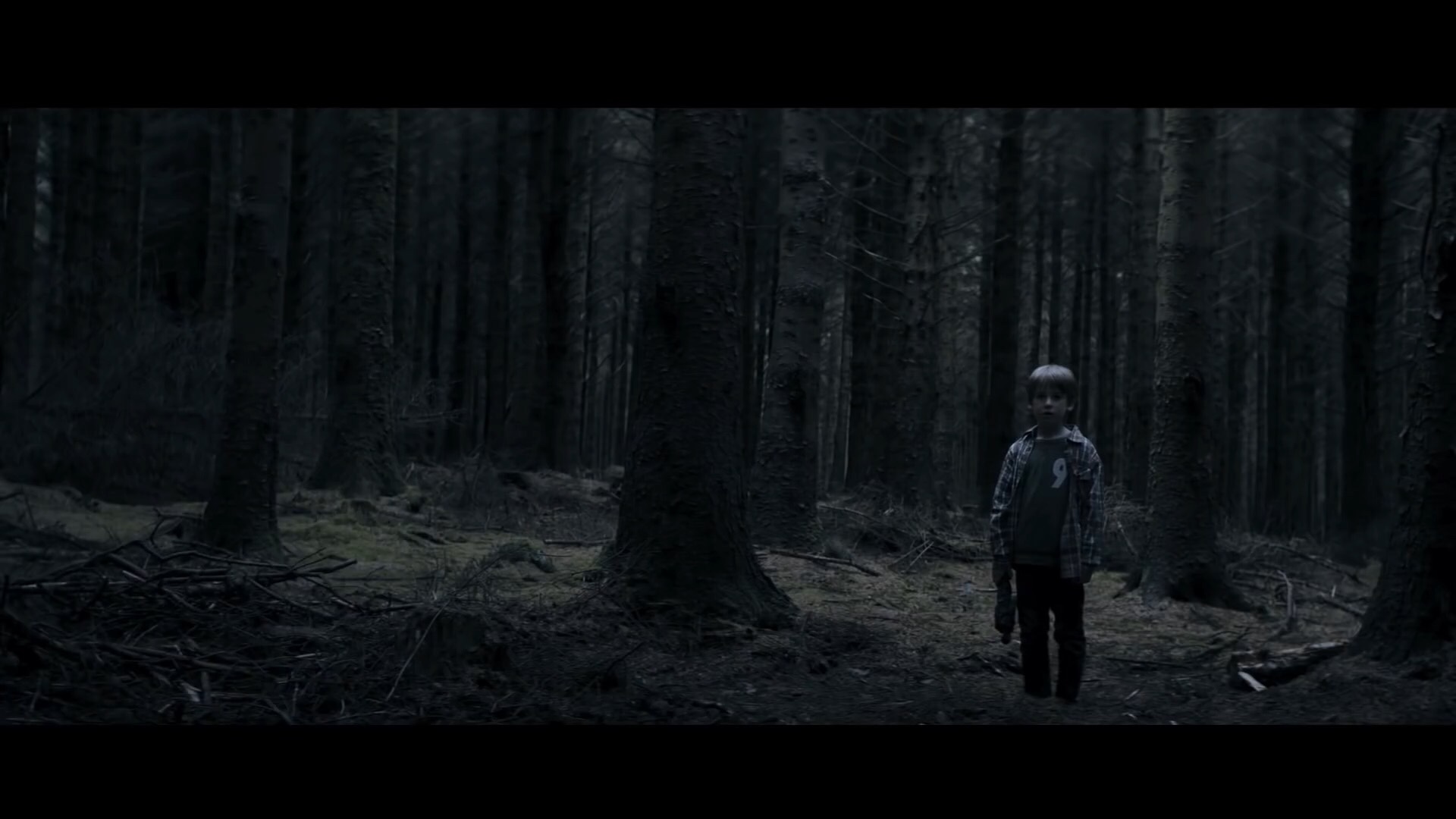 What happened in The Hole in the Ground Movie?

Taylor Holmes
featured
June 21, 2019
What the heck happened in The Hole in the Ground Movie? Because this thing is one big walking metaphor if you ask me. And it's a hole that matters to you. It matters to me.
screenplay
directing
acting
action
editing
Reader Rating7 Votes
3.6

Ambiance and Mood piled on like molasses. Sometimes these are the only things you need to carry a new movie forward. Movies like The Little Stranger, We’ve Forgotten More Than We Ever Knew, and I Am the Pretty Thing That Lives in the House, know how this works. Atmospherics and oppressive soundtracks. Sound effects and gloriously complicated lighting, or lack there of. Sometimes that’s all you need to pull off a movie, and to do it well. OK, maybe a little more than that, but you get my point. I mean, look at the movie Starfish, almost 100% ambiance, and it’s absolutely brilliant. And that’s what we have here today with The Hole in the Ground.

But first, I need to tell you how I found this particular movie. Sometimes you guys tell us about great movies in that red tab at the bottom of this page (or here), but not this time. This time I found it by wandering back through one of my favorite standbys, A24. A24 being the film production house that brought us brilliant films like Hereditary, First Reformed, The Killing of a Sacred Deer, A Ghost Story, Green Room, High Life and The Lobster. And coming from a pedigree like that, The Hole in the Ground has got a lot going for it.

The movie is basically the story of a mother, and her son. They have recently moved to a new area, and she begins to worry about her son. She worries about his friends, and how he recently lost his father. And then one day, mom discovers an enormous hole in the ground

Here, have a trailer, and then we can talk about it.

Alright – interesting – no? I mean, seriously, how can a hole in the ground be anything but a gigantic metaphor? Realistically, that literally can’t be the thing the writer and director are actually wanting to talk about. Can it? So yeah, it’s clever for what it doesn’t say, as opposed to the overt, more obvious things that this story is seemingly talking about.

Alright, I can’t talk in code anymore. If you haven’t watched the movie yet, then you’ll need to go. Or, better yet, leave this window open, and go to Prime and watch, or watch here on Youtube, or Google Play, and or maybe vudu is your thing. Regardless, watch it, and then continue on. OK? Promise? Great.

The Hole In The Ground Walkthrough

The Hole In The Ground is the story of a woman named Sarah O’Neill (played by Seána Kerslake), and her son named Chris (played by James Quinn Markey). They’ve left Mr O’Neill behind, and they are doing their very best to make this thing called life work. But they are both having difficulties making that happen. Their transitions are going poorly. Chris doesn’t have friends at school, and Sarah is doing anything but fitting in to this new town.

But then Sarah meets the disturbed older lady, Mrs. Brady, down the street who is convinced that Sarah’s son is an imposter. Apparently Mrs. Brady, also thought her son an imposter, and ended up driving the boy down one day. Well, a couple days later, Sarah finds Mrs. Brady dead, with her head buried in the ground.

Now, insert a lot of ambiguity here about whether or not A) Sarah is going insane, or B) Chris really is an imposter. And obviously, almost all of the evidence for 90% of this film points to Sarah being insane. And understandably. Because it’s physically impossible for someone to switch out Chris’ soul. Which is where the ambiance and mood come in. The musical score here is to die for. I mean, it literally is a character unto its own. And the sound design, which is wicked good. And the lighting. All really really huge parts in this film. But ultimately there are vignettes of Sarah trying to prove that Chris isn’t Chris. But even if she does “prove” it to herself, is she just self validating her own insanity? Which is the knife’s edge of these sorts of movies.

The Hole In The Ground Explained

So the ending of The Hole in the Ground goes really the only direction it physically can, which is to double down on the premise. Sarah heads to the hole, determined that Chris is an imposter. And she walks into the abyss, in an attempt to find her real Chris and to save him. And after she lands in this upside down world, she wanders among the roots, and the dirt, and decomposing bodies, in order to find her Chris. Which she ultimately does. And she also finds various forming amoeba-esque shapes that are taking the shape of their top-side counterparts. And ultimately she discovers herself…her own doppelganger. And she pummels it to death, and makes a run for it. And when she makes it to the house, where Chris’ doppelganger is still locked in the house, she lights the house on fire. Roll credits.

Uh. Wait. What? What could this possibly mean?

Yeah, it’s crazy. The movie itself is pretty easy to understand. Basically someone, something, swapped Chris when he was playing near the hole, for an evil copy of himself. And not only was this evil hole taking Chris but it was making plans to steal Sarah as well. But Sarah made it out with her soul in tact, and Chris’ as well.

But What Does It Mean?

Think about it. There is no more difficult job on the planet then that of a single mother. I’ve been on the record as saying that Time’s person of the year should always be a single mother that is keeping her kids safe and sane. Because there isn’t a harder job on the planet. I can’t imagine. And so we have this newly separated mother who is just trying to make it. And as a result of these newfound stresses in her life, and in her son’s life, she begins to tip over the edge of sanity. She worries about her son’s friends, and his school, and the new area she dragged him to and whether or not it is safe. And the doubt of the change, and whether she is doing the right thing…all of that chaos just crumpling in on her psyche. And ultimately, the question is… can she hold it all together while she is doing her very best to keep her boy safe.

Like I said, there is no hole in this movie. The hole is a question of threats and worries that Sarah has. This pit is literally the vast expanse of doubt that she has. Can she keep him safe? She doesn’t know. Can she save him? She doesn’t know. Can she even save herself? Better yet? Can you save yourself or your loved ones from the chaos that surrounds us all? This is the real question that The Hole In The Ground is asking. And the answer is, definitively, No. No, you can’t. Which leads to a serious lack of control, and fears, layered on by fears. I mean, that’s the answer if you are honest with yourself anyway. All you have to do is wander through Reddit’s “What could Go Wrong” sub, and you’ll quickly realize how out of control this life really is for all of us.

Which brings us back around to The Hole In The Ground. What is your hole in the ground? Me personally? I spiral when I stop and think about how short this life really is, and just how fleeting our moment in the sun can be. What about you? What is your hole? Do you even stop to consider it? Have you taken even a moment out to consider it? Maybe you should. And after you figure that out, rewind the movie to the beginning (Be Kind – Rewind) and watch it again. But this time, consider your own sinkhole, and how it consumes your day and your life. And how you can possibly get free from the hole that consumes you.