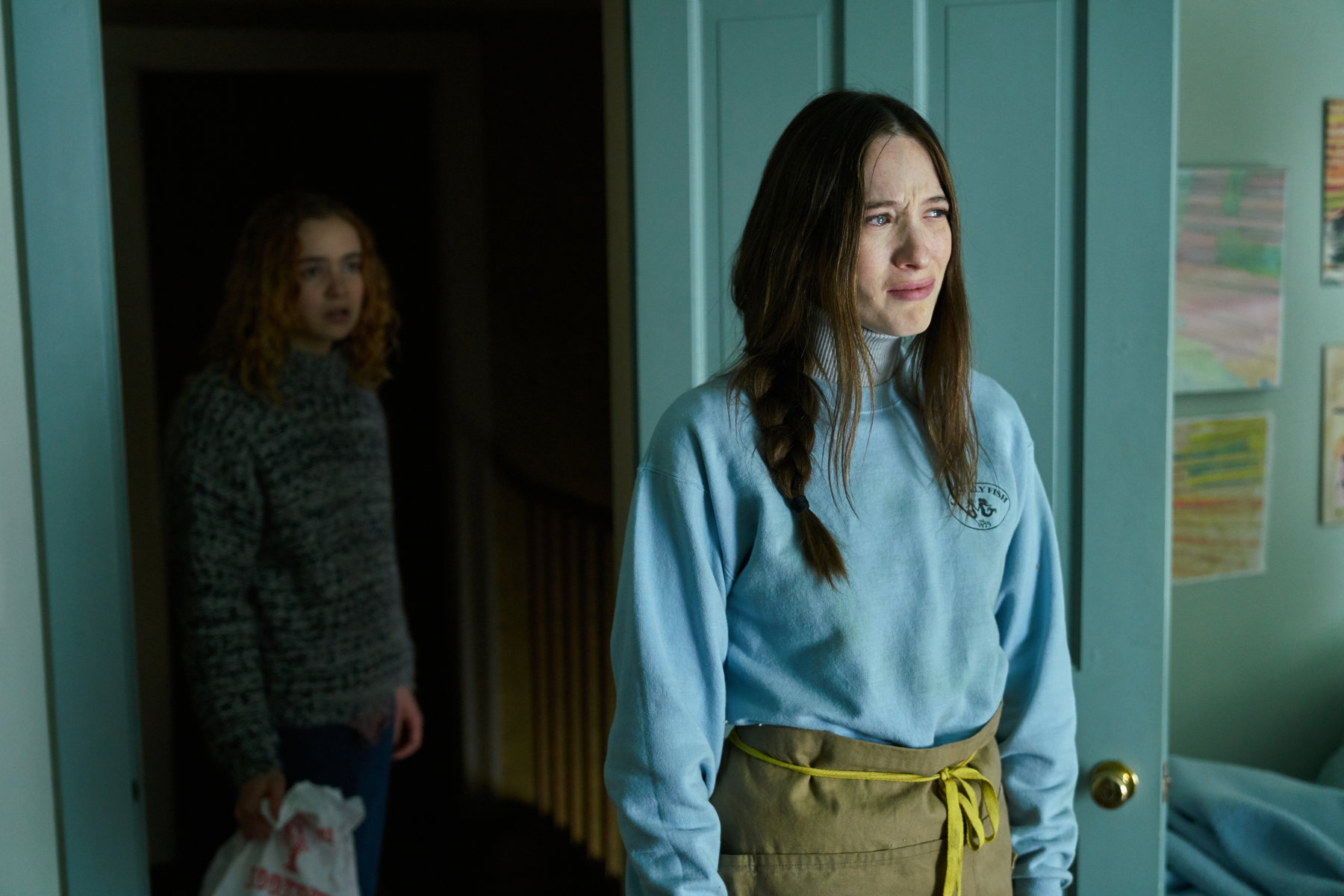 Blow the Man Down is Crazy Murder Mayhem

Jeremy Simmons – where have you been all my life buddy?? Gah. It’s been too long. Especially when your being back in my life means I also get crazy movie recommendations like Blow the Man Down. I had literally never heard of it… like not even a whiff. But Jeremy knows my taste in movies well, apparently, because this thing is crazy, unpredictable, and it has an ending that I’m still scratching my head at. So it makes sense that Jeremy, being brilliant like he is, would bring this movie to THiNC. for all of us ponder and conjecture about. Because, as I’ve said, Blow the Man Down is Crazy Murder Mayhem madness. It seems as though we’ve had a ton of movies like this one of late. Messy, crazy films, that you might need a shower after you are done! Movies like Come to Daddy, I Don’t Feel at Home in this World Anymore, Green Room, Blue Ruin, etc., etc.

If you, like me, haven’t heard of it… it is a black, very black, comedyish, thriller, wherein Mary Beth and Priscilla Connolly do their very best to cover up a gruesome murder. It’s so offbeat as to throw a rod if you aren’t careful. But again, if you are a fan of Independent film, enjoy dark thrillers, and like large dollops of quirky offbeatness, then maybe this film will be for you. OK, so, like always, we’ll walk through the films inner workings in order to make sure we are all on the same page – and then we’ll talk through the ending and see if we can make any sense of it. So, trailer, walkthrough, dissection, and theories. Got it? Great.

If you have not seen the film – stop. Do not continue. It makes me angry when people read on. Just go, enjoy the film – its free on Prime, and then you can come right back to this tab. We clear? Good.

Blow The Man Down Walkthrough

As the movie opens, there is a man chasing a woman through the snow. It’s oblique, and we don’t know really what is happening there. But it becomes important later.

Jump to, Priscilla and Mary Beth Connolly. They are attending their mother’s funeral. Both women are desperate to get out of the town, but apparently, their mother was financially bereft, and they are trapped. Mary Beth heads out to the local bar, where she meets a schlep named Gorski. Gorski and Mary Beth leave together, and Mary Beth drives Gorski’s car because he’s too drunk to drive. But Mary Beth isn’t much better, because she crashes into the town’s Paul Bunyan. Regardless, Mary Beth starts getting creeped out when she spots a handgun in the glove-box…and then later, when she spots blood, and long hair in the trunk. Sensing that Mary Beth was on to him, Gorski attempts to attack Mary Beth. But after a pursuit, Mary Beth stabs Gorski in the throat with a harpoon. And then hammers him in the head with a brick. And, just like that, we have a corpse…and a question as to whether or not it was cold blooded murder.

Now, Mary Beth has a problem. She heads back to her home where she tells Priscilla what happened and begs for her help. Priscilla weighs her options, goes to call 911, but decides against it at the last second. Priscilla and Mary Beth slice and dice Gorski into an igloo, and dump him in the harbor. BUT! Priscilla lost her carving knife she used at the Connolly Fish store – with Connolly Fish engraved on the side of it. So Mary Beth goes back to Gorski’s to look for the knife… I mean, they HAVE to find the knife. It is covered in Gorski’s blood for heaven’s sake. Well, Mary Beth doesn’t find the knife, but she does find the sack of money that Gorski had hidden under the floorboards. But, you know who does find it? Enid. The owner of the local brothel.

Separately, Priscilla let’s the police borrow her boat to fish a woman out of the harbor. At first Priscilla believes that they are pulling Gorski out of the water, and that the game was up. It turns out that the body is a woman that worked for Enid at the brothel. And obviously, the police decide they need to interview Enid and find out exactly what she knows. But Coletti thinks Enid hung the moon, and that she couldn’t possibly have done anything like murder. The two cops do find Gorski’s car, as well as the guns, and the blood inside. Which, immediately links him to the murder of Dee, the prostitute found in the water.

OK, now, the convoluted bit. Dee, the girl that died at the beginning, her best friend at the brothel, Alexis, well…she knew that Dee had cracked Enid’s safe and taken Enid’s money. Enid discovered what Dee had done, and hired Gorski to get her money back. Gorski killed Dee, got the money, but then, as we know already, was killed by Mary Beth. And it was Mary Beth who later took the money from Gorski’s house. Anyway, because of a voicemail Dee left, Alexis knew that Dee had gotten the safe opened and that ultimately Enid had her killed to try and get the money back. So, Alexis goes and tells the other three women that had originally opened the brothel with Enid what Enid had done to Dee. But they just tells them to leave.

Enid attempted to blackmail the girls with the knife they used to cut up Gorski. And eventually Priscilla and Mary Beth decide they really just need to settle their debts with Enid. The girls go to talk with Enid to get the knife back, and return the money. Enid attempts to give them some of the cash, and invite them to come work with her at the business, but the girls have none of that. And, after Enid throws an inebriated apoplectic fit, the girls inform Enid they are taking the knife and leaving the cash. Alexis, who was packing to leave, watches as the two girls go. She then heads into Enid, who is sleeping, and smothers her to death. Alexis and her friend, then leave with the money.

Gail, one of the three women that had been trying to convince Enid to come clean and shut the house down, goes to Coletti (the cop) and tells him what Enid had done. Coletti then tells his partner that they are going to go and make an arrest (Enid), and shut the brothel down. Susie Gallagher, while walking by the pier, sees Gorski’s igloo, banging against the peer. And she hauls it in, disposes of the body, and is seen by Priscilla and Mary Beth, cleaning out the igloo. And the movie ends with Susie smiling to Priscilla and Mary Beth knowingly.

A Few Thoughts on Blow the Man Down

The first, and most important thought on the film Blow the Man Down is that the music is brilliant. The film is inter-cut with a Greek Chorus of men singing sea shanties regularly throughout the movie. Here is the opening of the film, and you’ll see why I was so taken by it:

I will admit that after the film concluded I was a downward spiral of sea shanties and pirate songs. Like this performance of Bully in the Alley, led by John Bromley of Kimber’s Men. Or David Coffin leading out a rousing rendition of Roll the Old Chariot at the 2010 Portsmouth maritime folk festival. But I digress.

I will say that the men in this film are all just window dressings and nothing more. Literally. This Fargo-esque dark thriller is carried 100% by the women of the town. You can almost feel the years of male oppression pressed against the necks of these women. They’ve had to find a way to figure a way to stay alive – and if it includes prostitution and murder, then what of it?

This past summer, my family and I tripped up to Bar Harbor in Maine, and my family was transfixed. Literally gobsmacked and transfixed. I tried to explain to my kids that there were probably ten days of the year that were that idyllic and glorious. But they wouldn’t listen to a word of it, and I couldn’t dissuade them of their infinite affections. But this Blow the Man Down version of Maine is definitely more frigid Fargo than perfection on the shore. We have our idiot cops. Horrific crimes. And selfish motives driven by a ruthless town.

But the larger questions here are about a group of people who are struggling to survive. When on your back, is it okay morally to do absolutely anything to stay alive? When Mary Beth is set upon by a possible rapist and murderer, was she in the right to skewer him with a harpoon and bludgeon him with a brick? Worse, should we assume that the patriarchal society would assume the best of us when we do what we have to do to survive? It really is a fair question.

It’s interesting because the film’s answer seems to be a resounding… “Well duh.” But the answer actually isn’t that obvious. It is the downward spiral of the people in this town that have brought this chaos on themselves. Please know that I’m not judging, I’m just stating the obvious. This Pentateuch of women decide years earlier that they are going to go in together to create a brothel in order to survive. But when their men are lost to the brothel, and the girls that work the place are lost as well, a few of them come to their senses and realize what they have wrought. Which is why the trio of women trying to shut the brothel lean in and help Priscilla and Mary Beth get out of the mess that they’ve found themselves in. The women were admitting that they played a part in this chaos, and that in order to pull the parking brake on this chaos, they would have to stick together.

A Few Final Thoughts on Blow the Man Down

It’s very rare to see a film as good as this one nonchalantly lead by all women. (I’m not so obliquely referring to the recent travesty that was the all women Ghostbusters, and Charlie’s Angels, etc. Sure, make it an all women cast, but can we do it without the political “look at me” baggage?) But I really enjoyed the grittiness of it, and the tangled web that is woven over the course of the hundred minute run time. So, thanks, Jeremy for bringing it to our attention!! It was really messy, gory, ugly, and absolutely riveting.